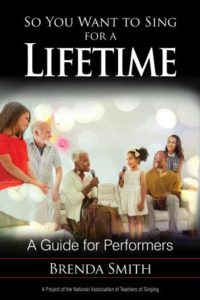 The So You Want to Sing series, sponsored by the National Association of Teachers of Singing and published by Rowman & Littlefield, is almost complete. Series editor Matthew Hoch is working feverishly for the 20th and final book of the series to be finished in time for the NATS National Conference in the summer of 2020.

Including this article, the first fifteen of the books of the series have now been featured in Classical Singer magazine or on CSmusic.net, and the articles can be accessed through the CS archives. Although most of these books focus on specific musical genres (including music theater, gospel, and barbershop, among others), author Brenda Smith instead chooses to focus on longevity of singing—regardless of genre—in So You Want to Sing for a Lifetime.

In the “Introduction,” Smith concisely states her purpose: “How to develop a healthy singing voice that will last a lifetime is the main topic of this book.” She insists that the passing years should not be a reason to stop singing, and believes that singing is an activity that stands to benefit anyone of any generation throughout a lifetime.

Of course, just as every human body develops and changes with age, so does the voice. Therefore, the majority of the book outlines what to expect from these changes and how to negotiate them while singing.

In chapter 4, “Skills You Need for a Lifetime of Singing,” Smith identifies four “basics of singing” that are crucial for longevity: relaxation (both physical and mental), posture (including how specific shoes or even sitting down can impact singing), breathing, and resonance. She also emphasizes the importance of learning musicianship skills by explaining that those who sing while being uncertain about pitches and rhythms will sacrifice physical coordination and place their voices at risk. She also presents the question, “Can anyone learn to sing?” and answers with an emphatic “Yes!”

One of the more important chapters in the book is “The Effects of Age on the Voice,” by Robert T. Sataloff, Karen M. Kost, and Sue Ellen Linville. A modified version of a chapter from Sataloff’s 2017 book, Professional Voice: The Science and Art of Clinical Care, the chapter describes the anatomical and physiological changes that voices undergo from fetal life to advanced age. Although they deliver the “not-so-cheery” news that all voices will inevitably experience decline over a long life, they also offer the hope that many vocal functions may be maintained sufficiently to allow for high-quality singing into a person’s seventh decade or beyond.

Representing a deviation from the previous genre-specific titles in the series, So You Want to Sing for a Lifetime digs into a topic that deserves continued attention. Singers who understand what to expect from the natural effects of aging on the voice need not be surprised or disheartened by these changes. Rather, they are empowered and better equipped to work within the bounds of their changing instruments. Smith’s volume offers hope and encouragement for singers of all ages.

The 13th book in the So You Want to Sing series returns to its original mission of providing a survey of what it means to sing within a particular genre—specifically those of contemporary commercial music.

In So You Want to Sing the Blues, author Eli Yamin states his belief that the blues receives “short shrift” in academic settings despite being a foundational genre of American music. In fact, even though his book is preceded in the So You Want to Sing series by volumes on rock ‘n’ roll, jazz, and country, he claims that blues music is the foundation of these musical forms as well as other popular forms like hip-hop, rhythm and blues, and bluegrass. Steeped in rich African-American origins, Yamin believes blues performers must be passionately self-expressive while also being tuned in to the greater community. In so doing, effective blues musicians must be willing to bring “a unique level of honesty and emotional range” to their performances.

“The Origins of the Blues” chapter delves into the roots of the blues by exploring the genres from which it sprung (spirituals and gospel, ring shouts, work songs), its musical language (blue notes, elastic scales, 12-bar blues form), and its historical context, which centers upon African-American slavery in the United States. Throughout the chapter, Yamin links to relevant audio and video recordings that may be accessed on the companion website at www.nats.org/So_You_Want_To_Sing_Book_Series.html.

Yamin joins with Darrell Lauer for a chapter titled “The Magic and Mechanics of Singing the Blues.” The information differs at times from Scott McCoy’s “Singing and Voice Science” chapter, most notably in the labeling of the registers: Mode 1, Mode 2, etc. Regardless, the authors discuss the connection of the speaking voice to the singing voice, the priority of releasing unnecessary tension, and the importance of developing a “mixed register.” The subsection “You Are a Vocal Athlete,” however, aligns well with Wendy Leborgne’s chapter, “Vocal Health for the Blues Singer.” Similarly, Yamin and Lauer’s emphasis on relying on the microphone for vocal support has parallels with the “Using Audio Enhancement Technology” chapter written by Matthew Edwards.

The remainder of the book examines how to develop authentic stylistic characteristics by dissecting landmark blues performances from some of the genre’s most significant artists. Those looking to truly embody the blues style will make extensive use of the numerous recordings available on the companion website that accompany these chapters.

Yamin has considerable experience as both a blues performer and a blues educator. So You Want to Sing the Blues shows his deep investment in honoring the history of the genre and provides encouragement and a reliable blueprint for carrying the genre forward.