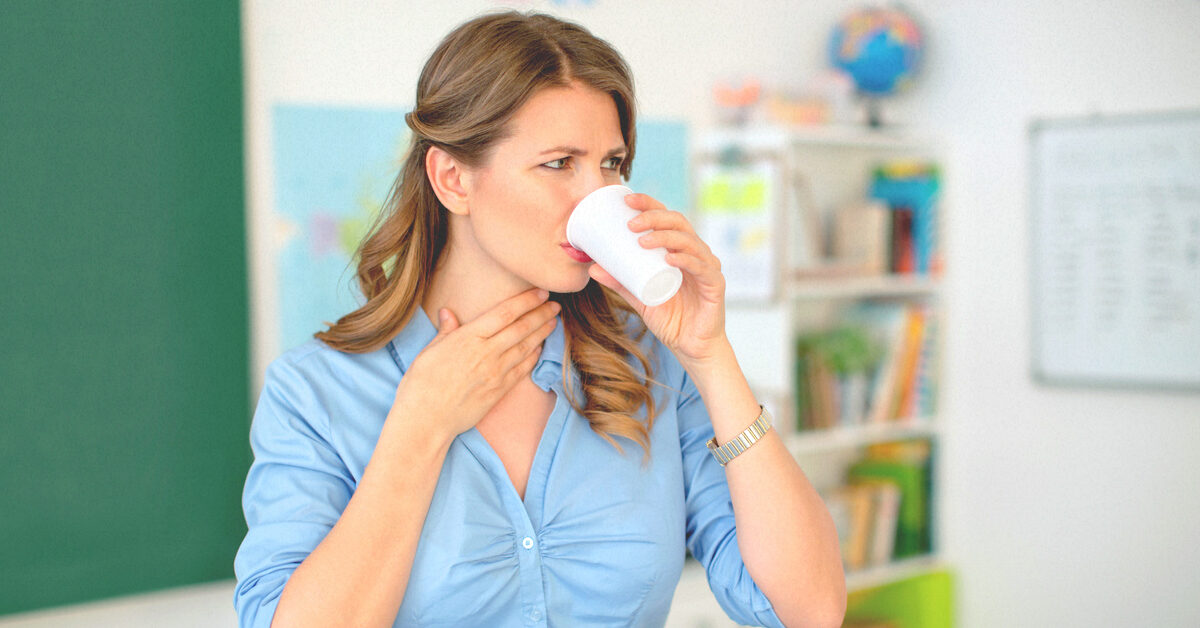 One of the most frequent questions I get from patients is about the somewhat mundane topic of throat clearing. Singers in particular are concerned about damaging their vocal folds and why do some people need to clear their throat constantly? Most importantly, is there a right way to do it?

We all do this. You feel some mucus in the back of your throat, perhaps a bit of hoarseness. You take a big breath, and push it out, making that loud grunting sound that your friends find so annoying. Sometimes it clears the voice and sometimes not, so you repeat the maneuver a couple of times.

What actually happens is that you approximate the vocal folds closely, and force air through the narrow opening, shaking the vocal folds and hopefully dislodging the mucus. The mucus is dispersed into hypopharynx and moves to the back where you can swallow it.

Mucus is secreted by most of your mucus membranes, from the sinuses and nose on back. It normally flows down the back of the throat, on either side of the larynx, and around the back to the top of the esophagus. It is kept moving by tiny cilia, hair-like projections that project up into the mucus sheet and push it backward, ratcheting it down towards the back of the pharynx. These cilia are found almost everywhere in the upper and lower airway, and are waving constantly. Mucus moves along, like dishes on a cafeteria conveyor belt, and we are not even aware of it.

But the vocal folds are different: they do not produce mucus, and mucus flows onto them passively from above, mostly from the laryngeal ventricles. Further, they have no cilia to move and clear mucus, or other debris, from their surface. So any mucus that lands on the vocal folds must be cleared in some other way. And there are actually three mechanisms for this, swallow, cough, or throat clearing! If the mucus is thin, a swallow squeezes the vocal folds together, and raises and moves the entire larynx upward and forward. This may be all that is needed.  If the clump of mucus is dry and discrete, a cough, producing a rapid flow of air, can dislodge it. But if the mucus is not a great quantity, but thick and adherent–well, we’re back to throat clearing.

There are many reasons for thick tenacious mucus adhering to the folds. A detailed description is a topic for another article, but here is are some possible causes: allergy, inadequate hydration, drying medications, inflammation of the throat, infection, smoking (nicotine can paralyze the cilia), excess alcohol, and reflux. We also need to realize that what feels like “mucus” may in fact not be mucus that is excessive in quantity. Rather, it may be mucus that is too thick, and actually inadequate in quantity! A small amount of thick mucus will cause more symptoms than a larger quantity of normal thin mucus. Mucus could be thick from inadequate water intake or, in case of infections, increased viscosity from bacteria and pus. Further, even normal mucus will adhere more to inflamed surfaces, and create the feeling of something in the throat that needs to be cleared.

We also need to consider throat clearing as a habit. There are those who, when nervous, or before speaking, habitually clear their throat. Nervousness can certainly create the sensation of a dry throat, but if clearing becomes a habit, it needs to be addressed. And finally, vocal fold abnormalities, such as a small polyp, can make the voice sound hoarse or “wet” and trigger the urge to clear the throat. If you have heard Dr. Anthony Fauci on television, you know what the wet rattle of a laryngeal polyp sounds like (fortunately, this has been recently and successfully removed, and Dr. Fauci sounds much better).

So, to address the topic of “harmless” throat clearing, we really need to go back and think about the “why” before the “how.” Occasional throat clearing for a good, and hopefully transient, reason is fine, but if you do it constantly, consider the above discussion to see if you can address the cause. Be aware also that patients complaining of “mucus” are often treated with antihistamines by well-meaning physicians. If the mucus is already overly viscous, this can make the situation worse, not better. A more effective treatment might be medications that thin the mucus, such as guaifenesin or acetylcysteine.

Singers are often told to clear mucus with a voiceless quick exhalation of air, so throat clearing without the grunt. If you have tried this, you will know that it is not as effective: the vocal folds are held slightly apart, so the edges of the folds do not vibrate, and do not effectively shake loose the mucus. Further, the greater distance between the folds reduces the mechanical force of the air flow, and you may still be left with a feeling of something stuck.

So here (finally!) are some suggestions for effective throat clearing. First, make sure you are hydrated and that your vocal folds are moist. Drink water, inhale steam or nebulized saline, or start your routine with a hot shower. This will thin the mucus, making it less adherent and easier to dislodge. Try to move the folds by inhaling, as part of a snort- this can also be somewhat effective. Finally, make the clearing sound as a repeated short attack, rather than a long grinding rattle. If no success, wait a bit before repeating.

Despite all of the information you may have heard, intermittent normal throat clearing should not harm your voice if you are otherwise healthy. You may be at slightly higher risk for vocal damage if you are prone to bleeding, either from a blood vessel on the vocal folds, or other causes, such as menstruation, or taking blood thinners. But, absent these factors, you should be fine to occasionally clear the throat.

Anthony Jahn M.D. is an otolaryngologist with a subspecialty interest in ear diseases, disorders of hearing and balance, and disorders of the voice. He is a professor of clinical otolaryngology at Mount Sinai School of Medicine and is a noted author of The Care of the Professional Voice. For more resources, go to his website www.earandvoicedoctor.com.