Soprano Alexandra Nowakowski boasts a beautiful, high-flying voice and a burgeoning career which has led to collaborations with several of the most prominent operatic conductors and directors in the world. Nowakowski makes it look easy, but she candidly shared how she learned to work through numerous challenges along the way to success. 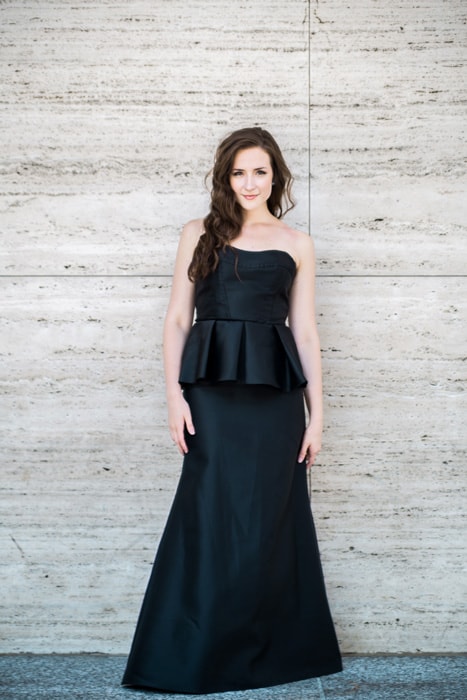 CS: How would you describe the course of events that set you on the course toward opera?

AN: I wish there was one “aha” moment that led me down this path, but it was most definitely a series of snowball events rather than one push.

Ever since I was little, I would sing and dance around my house, as most children do, I think. I started getting involved in musicals in grade school and was always cast in the chorus. I never had a wunderkind type talent, and honestly, I was perfectly content with that. I was just happy to be included in something and make new friends, and singing was always something I enjoyed.

In high-school I started taking voice lessons, and slowly got more and more interested in developing vocal technique. I didn’t think I would go into music as a career, but applied to a few universities for music just in case. Indiana University and Juilliard both didn’t grant me auditions; the University of Illinois at Urbana-Champaign was the only music school that did. Everywhere else I applied for a variety of majors, including Communications, Speech Pathology, and even undeclared. In the end U of I gave me a partial scholarship, so at the last minute, I chose to go there for my undergraduate studies (I couldn’t make up my mind until the final deadline!). Even in college I still wasn’t certain I wanted to sing, and my freshman year I decided to change my major. Before I could make it to my admissions officer, I won a competition at the university that granted me a full tuition scholarship, and from there, the rest is really history. I took it as a sign that I needed to stay the course, at least for now.

During my second year at U of I, I discovered a teacher whose students were growing, technique improving, and winning accolades. Her name was Cynthia Haymon, and at the end of that year I was able to switch into her studio. I will forever be grateful to Professor Haymon for the countless hours she spent with me working on technique. I really think this is the foundation for all singers, and my passion for vocal technique is still one of my favorite parts of being an opera singer. Professor Haymon was more than just a teacher; she was a true mentor for me in terms of handling the business emotionally, as well as putting in the hard work and keeping negativity away. Her tough love approach was exactly what I needed at this time. My senior year I started applying to grad programs. Again, Juilliard did not grant me an audition. On April 1st, 2014, I received my acceptance to the Academy of Vocal Arts – and I definitely thought it was an April Fool’s joke. After I realized it wasn’t, the grueling four years of AVA began, but I wouldn’t change those four years for the world. Again, I found an incredible teacher halfway through my time in the program: Bill Schuman. Bill uncovered these coloratura notes that I had never previously been able to reach and worked with me tirelessly to even out my range. I finally found my opera niche, and I’ve been loving singing those stratospheric roles ever since.

So really what I hope to show here is there is no one moment. I took every small win and tried to be as patient as possible (read: I was very impatient but stayed the course). I fell in love with opera slowly and developed very slowly, and worked like a dog on my technique, and honestly, I still do every day.

CS: How do you deal with the pressure of a major vocal competition, audition or debut?

AN: Oof, this is a toughie. Prepare, prepare, prepare. Nothing will take the place of preparation. But also, if at first you don’t succeed, try and try again. In 2017 I won my first major prize in the Gerda Lissner Foundation Competition. The truth of the matter was that I had already been Megabus’ing it to New York City for two years prior to this win for countless other competitions (that I didn’t win anything in, by the way). I kept changing out my rep, trying to find an aria that would showcase me in the best light for a competition, and eventually found it. In terms of a debut, I recently sang the Queen of the Night at the Kennedy Center. I had one performance with limited rehearsal, and although I know of many Queens who sing the role with NO rehearsal, that didn’t make it any less nerve-wracking! I remember feeling like singing my first aria was an out of body experience. But again, I also knew that I had sung this aria a gazillion times. I knew the words. I knew the staging. I knew the intention. Sometimes the only thing left to do is take the leap.

CS: Is there a particular vocal repertoire that you connect with most? If so, why?

AN: It’s a really special experience for me whenever I get to sing in Polish. We spend so many years as opera singers focusing on German, French, and Italian, and while these are absolutely crucial languages, before I was an opera singer I was a little bilingual girl who couldn’t get her Polish and English straight. I have so many home videos where I am 5 and under, mixing the two languages and unable to find my footing in either. Eventually I went on to pass my Polish “matura” (highschool diploma) after years of Polish school. It’s a language that is a part of my family and who I am, and one I am deeply proud of. I am excited to be singing a recital of mostly Polish repertoire this upcoming April with the Embassy Series in D.C. at the Residence of the Polish Ambassador, which is a huge honor for me. I hope I can represent the thousands of Polish-Americans that have made the states their home while celebrating Polish culture.

CS: What is the best singing or life advice you’ve ever received?

AN: The best advice I’ve ever received has also been the hardest to follow – “festina lente.” It means “make haste slowly” in Latin. I’m a Taurus, so I tend to be head-strong, stubborn, and impatient. I try to remember it’s a marathon and not a sprint!