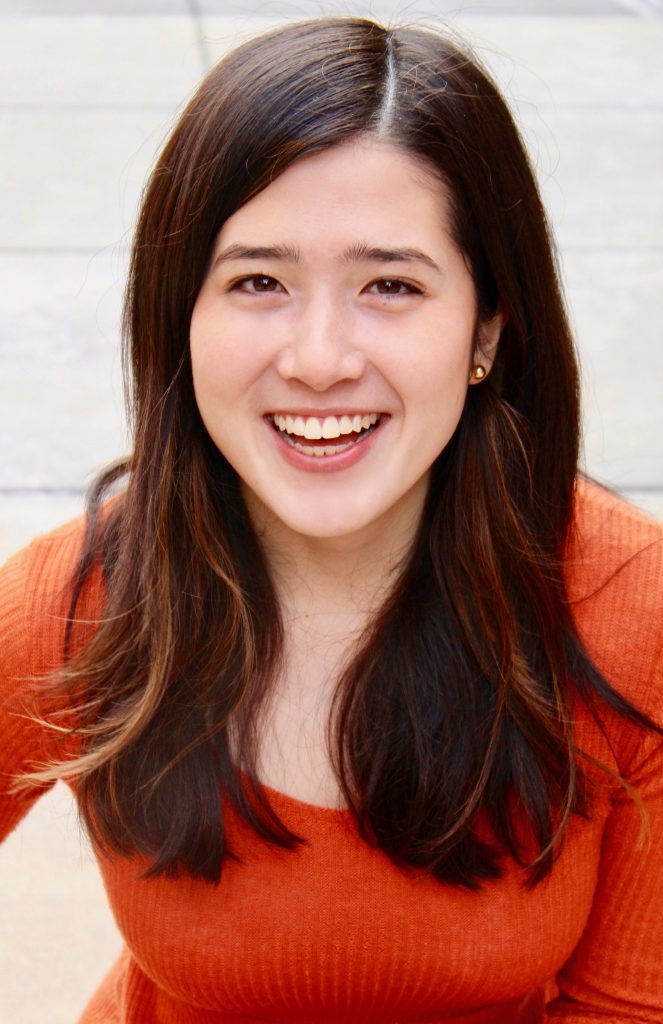 Francesca Hsieh shares how she provides support for BIPOC students, preparing them for navigating repertoire issues and institutional racism in the voice studio.

Francesca Hsieh has had a busy four years. While earning her BFA in musical theatre at the University of Utah, she performed in mainstage musicals and plays and served as assistant director for multiple productions, both in the university’s Department of Theatre and for the professional Pioneer Theatre Company. She also built administrative chops serving on the board of Open Door Productions, which produces works written and directed by students and hosts regular workshops with theatre professionals from across the country. She was recognized for her hard work when she was admitted to the theatre directing graduate program at Royal Holloway, University of London.

Despite these theatrical accomplishments, her work away from the stage has made just as much of an impact. In the summer of 2020, Hsieh set out to provide support for students from marginalized populations—including those who are Black, Indigenous, and people of color (BIPOC)—by cofounding an organization called the BIPOC Artists for Awareness. Hsieh, who is Chinese and white, and her colleagues are working to bring attention to the greater need for equity, diversity, justice, and inclusion within the Department of Theatre.

Hsieh shares her experience and perspectives on how a singer’s race and ethnicity can impact the work done in the voice studio and the career implications that may have.

To what degree do you think a singer’s racial or ethnic identity should factor into song choice in the voice studio, if at all?

I definitely don’t think it should be at the forefront because, at the end of the day, the goal in lessons is building better vocal technique. But, in musical theatre especially, when you’re starting to pick rep that’s going to go in your audition book that says, “These are roles that I’m presenting to the world, that I want to play, that I can play, etc.,” I think race and ethnicity have to be a consideration because it is going to be a consideration in your career.

Even when it’s not a career-focused lesson environment, I think that it’s an important conversation to have. Sometimes working on music that is reflective of your racial background can be fun and exciting and can make you feel more motivated and more inspired. Students may think, “Great, I get to portray this character who looks like me and has my experience! Usually, I don’t get that opportunity.”

But then, on the flip side, it can be something that is traumatic. A lot of characters that are written for people of color go through intense situations. On top of that, most of that music is written by people who are not of color. Then it’s a hard balance to strike, whether you feel like a role is representing a true person of color, like me, or representing a stereotyped white image of what my race is or how it’s often portrayed in the media.

Ultimately, it’s an important conversation that should take place. Your voice is so personal and uniquely tied to who you are and how you identify.

Have you been assigned repertoire in lessons that you have been uncomfortable singing?

At the very beginning of my lessons with one teacher, she said, “Do you want to sing something from The King and I?” And I said, “No,” so we didn’t. But then she said, “Well, we’ll save it. We’ll put it off.”

So, there was an expectation that I eventually would have to learn that music—whether I want to or not—and those songs have got to be in my rep. That is a very unique person-of-color experience. Your average student is not told, “You’re going to need this song in your book.”

Do you worry that if you show up for an audition and your book is full of rep for Asian characters, people will think that’s all you are able to play or are interested in playing?

That’s a big thing. Part of it is that a lot of the roles—for Asian women, especially—are fetishized: they’re prostitutes, they’re being sold, etc. That’s not fun to delve into all the time. But another big part of it is I don’t want to do The King and I and I don’t want to do Miss Saigon because the minute I start saying, “I’m an Asian actress,” then people may think, “Ah, that’s her thing.” And then it gets you stuck.

Luckily, I feel like we’re moving away from that. You don’t have to leave the business altogether. But that is a big fear, because there are so many people whose careers became pigeonholed into one thing.

One policy you have advocated using in the voice studio is allowing students “veto power,” which would give them the ability to reject any song suggestions teachers make with no questions asked. What would be the benefits of such a policy?

It would make it safer, because repertoire decisions can be less emotional if a veto policy is defined from the outset. Then it doesn’t matter if the student says, “I don’t want to do that song.” It’s agreed upon from the get-go, and I don’t have to come up with a reason other than “It doesn’t make me feel comfortable.”

It helps people feel better about voicing their opinion. It doesn’t have to be a big conversation that you need to sit down and have, it’s just how the [teacher/student] relationship is built. As I said, voice lessons are so identity based and so personal. Being able to have rules that allow you to step outside of any emotional trauma to just say, “I don’t want to” doesn’t have to be a big deal.

That may also encourage teachers to think, “OK, why am I assigning this piece?” If it’s a technical aspect or an acting-related element, there’s so much other music out there to choose from to accomplish that. Instead of assigning me a song from The King and I, I could probably get the same experience working on a song from Carousel or from Oklahoma! They probably call for a similar use of the instrument—a lot of those songs are structured in a similar way. I can get the same technical experience without having to make it about race.

I feel like it also makes both student and teacher more accountable. Teachers might consider, “Maybe the reason I assigned this piece is not because it’s the right piece for her based on where she is in her learning journey. Maybe it’s because I don’t get to assign this piece very often because I don’t usually have students of her race in my studio.” Then they can take the time to think, “OK, I suggested this song because of her race and she said, ‘No,’ so obviously that’s not what she’s interested in working on. So, let’s think about how I can assign her something else.”

How do you feel teachers should go about suggesting songs in voice lessons that are from characters of a specific race or ethnicity? Or would you prefer that they leave it up to the students to bring in that material?

I think it’s fine to bring it up, to say, “Would you like to sing something from The King and I?” It makes some people really excited to work on that kind of material. Other people won’t want to do it.

There’s a whole range of experience. So, I think asking, “Would you be interested in this?” is totally fine. I wouldn’t be offended by the question. I think it’s when it’s an assumption that it becomes uncomfortable.

Again, with the veto, the option of “no” is inherently there, and students can choose whether they feel good about it or not. But when it’s, “You should probably sing this” or “You should work on this,” then it becomes, “If I say no, then maybe I’m hurting my career, or it’s going to reflect badly on me as a performer, or it’s going to hold me back,” which isn’t true.

I think it’s fine to ask. Sometimes the answer will be yes and sometimes it will be no.

How does it make you feel when white people perform songs that are written for Asian characters?

It really is just painful when that happens, because it feels like you’re not important. If we can make so many other things important, why not this? Especially when we’re talking about roles that are so limited. If that’s your one role, even if you don’t always want to play it, but that’s your one shot of being in the canon and doing something that feels like it’s at least partly you and partly your family and partly where you come from . . . to see this kind of whitewashing basically says that aspect of who you are and your lived experience isn’t important or isn’t necessary to tell that story.