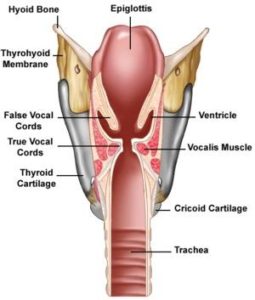 When I show photographs or videos of the larynx to a singer, the two questions I am most often asked are “Is there something different about a singer’s larynx?” and “Can you tell a singer’s Fach by looking at the vocal folds?” Since the answers are more nuanced than a simple yes or no, I think it is worthy of a column.

There is, in general anatomy, a wide range of what is considered normal. In general ways, my body may be no different from Jeremy Lin’s, but there are obvious differences which would become embarrassingly apparent after a few minutes on the basketball court. The same applies to singers. The basic anatomic structures of the larynx are grossly similar in all healthy humans, whether singers or not. The differences come from how they are used and how, over time, that use might subtly alter the anatomy.

Structure and function are inextricably intertwined—one defines the other. Anatomic limitations naturally impose some boundaries on how a body part can function. On the other hand, using a body part in a certain way will change its physical appearance. Look at the hand of a professional pianist. The hypothenar muscles (along the little finger edge of the palm) are large and plump and the contour of the hand is convex, whereas in normal hand users it might be straight. Years of practicing have changed the appearance of the hand.

Singers or not, for most of our daily lives we all use our larynx in the same way: we breathe, we talk, we cough, we push down. So, the differences in the larynx of the singer are necessarily more subtle. Singers are different from everyone else in that they do something that is not natural or reflexive—they learn to sing! In crude visual terms (and discussing singing in visual terms is like defining wine as a red liquid) this means to open mouth, relax jaw, lift palate, flatten tongue, open pharynx, and lower the larynx. You will see from this list that while the anatomy may be similar to the untrained voice user, it is the position of the vocal tract that is different.

Regarding the vocal folds themselves, they vary greatly in appearance. While we can photograph and record parameters like color, width, and length, all of these findings need to be weighed in the context of function. For example, if the false vocal folds are retracted (as when a singer sings with “an open throat”), we will naturally see more of the true vocal folds, and they appear wider. The “width” of the visible vocal fold is in part an artifact of how we look at it (from above and partly covered by the false folds).

What about color? Variations in color need to be considered against the image of what is normal for that individual. In general, high sopranos might have thin, white, almost bluish vocal folds, whereas in lower voices the folds might be white and more opaque. In the lowest male voices, the folds may always be a bit pink. But these are general findings, and each patient is different. So we need to document the norm for that person, and any comments such as “your cords look a bit red” need to be measured against that baseline appearance.

While on the topic of color, keep in mind also that most visual images of the larynx are electronically generated. The days of the film camera are gone. So, color is also a function of the recording device, the amount of light used, and the print generator. An over-illuminated vocal fold may look deceptively white, while a poorly adjusted recording device may turn everything red or magenta.

Can we predict Fach by looking at the vocal folds? To a degree, but not exactly. There are clues, of course: thin, long, fine vocal folds that are almost translucent suggest a light soprano, and thick, bulky, pink vocal folds are seen in a bass (as noted earlier). But in between these two extremes, what determines vocal range is determined by many parameters. The size and shape of the pharynx, the tongue, and the entire vocal tract all play a role.

A word now on blood vessels. In a hard-working vocal veteran, it is not uncommon to see small vessels on the vocal folds. The muscle is working, it needs a blood supply, and the body provides that blood supply! Further, the constant wear and tear of vocal folds coming together calls for tissue maintenance, which requires good circulation. The takeaway here is that blood vessels are not necessarily dangerous, nor do they invariably require treatment. Size, position, and clinical history of recurrent hoarseness or hemorrhage should guide any treatment. While I always point out vessels to singers, it is more in the spirit of making them familiar with their larynx (and preventing unnecessary panic when they are seen emergently on tour) than to necessarily advocate surgical intervention. If it ain’t broke, don’t fix it!

Although we think about the relationship of anatomy and function as somehow constant, remember that vocal characteristics are not fixed, especially in a young and developing singer. I have seen many young singers who project the gestalt of a pants mezzo, but describe themselves as a soprano. My attitude is that if they can sing a soprano repertoire, they should. It may be that they will eventually become mezzos with a high extension, but it may also be that I am wrong! They key is to be open and flexible as a singer explores and takes ownership of her voice—and not to get locked in by any of these imperfect indicators, such as the appearance of the vocal tract or mental preconceptions.

Is the singer’s larynx different from those of ordinary folks? Yes. But the difference is mostly in what the larynx does and the highly exacting standards the singer holds her larynx to. Since singers, in general, do not present with serious diseases of the larynx, I have always let function—i.e., the voice—be my guide. Even when examination reveals small nodules or a soft polyp, we need always to consider what singers need to do with their larynx. If they can perform their repertoire well and effortlessly, it really doesn’t matter that the folds may be a bit asymmetric or that there is a small blood vessel on one side.

Of course, if such lesions lead to increasingly effortful compensation during singing, such problems need to be skillfully addressed—but always mindful of what that larynx needs to do rather than how it looks.

Anthony Jahn M.D., noted author and professor of clinical otolaryngology at the Columbia University College of Physicians and Surgeons, has offices in New York and is a noted author of The Care of the Professional Voice. For more resources, go to his website www.earandvoicedoctor.com.