It’s summer. Time to get into the hammock and sip a cool lemonade as you catch up on your reading. Here are two wildly different approaches to “filling the well” with great readings on the art you love best.
Part I — Loving an Opera Book Club! by Joanie Brittingham

Part II — So You Want to Sing in Review! by Brian Maternach

This article originally appeared in Classical Singer magazine. To subscribe to the print magazine, go to www.csmusic.info/subscribe.

Part I — Loving an Opera Book Club! by Joanie Brittingham
As a young singer, unfamiliarity with repertoire is common. You haven’t had the years of experience of your coaches and teachers to know tons of operas. It can be difficult to be motivated to look up operas and then listen to recordings, watch DVDs, and study scores on your own. So, why not start an opera “book club”? 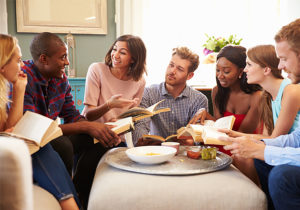 In a book club, people get together to discuss assigned reading and enjoy food, drink, and each other’s company. Doing this with opera DVDs or CDs can be just as gratifying. By doing it with a group, it establishes accountability for learning new operas—not just a new role, but familiarity with the overall work. It also makes it more fun.

If you wait until you’re hired to learn an opera, or if you learn only your specific audition arias, you do yourself a great disservice in competitions and auditions. Knowing about the entire work and being familiar with it musically and theatrically can enrich your experience of singing even just part of the work. It can also give you a vocabulary and musical knowledge to draw on in rehearsals. As noted in the article “How Practicing Less Can Foster Musical Growth” in Psychology Today, “musicians can always benefit by increasing the amount of music listening they do. Listening is a primary means by which we encode into memory what ‘good music’ sounds like.”

How to set up an opera book club:

1. Invite friends who would be interested to an initial event—choose a date and location. Consider space, quality of audio/visual equipment, and acoustics. If you have a tiny studio with a tiny TV, your apartment may not be the best choice. Maybe a friend with a giant flat screen can host, and you can be responsible for planning food.

2. Choose the opera to view. The sky’s the limit, but make sure it’s something that you or someone involved owns or can borrow readily. Make plans to check out DVDs or recordings from the library ahead of time. When I first started doing Opera DVD Night with friends as a college student, one of our professors made his extensive recording and DVD collection available for us.

3. Get scores. It’s important to follow along in the music. You can then see where great singers take more liberty with what’s on the page and get a greater feel for style.

4. Assign research tasks—have each invitee share something: insight into characters from having read the original source material (book, play, etc.), history of the piece, details about the composer, etc. Doing all of these tasks takes a lot of time, but doing just one is simple and allows the group to gain the benefit of learning from one another.

5. Plan a menu—potluck, tapas, wine, and cheese—anything goes! Book clubs always have food to make the night more fun and inviting; it’s a definite must for opera viewing.

6. Have fun! Enjoy learning a new piece with friends and colleagues that share your interest.

After my first opera “book club” night, the friends who attended practiced the bows the grand diva used and then performed the bows after singing in class together. In addition to gaining valuable knowledge of our art, we had a wonderful time bonding over the art form we all loved!

Part II — So You Want to Sing in Review!

Rowman & Littlefield and the National Association of Teachers of Singing continue to publish new volumes in the So You Want to Sing series. This article will feature the 14th and 15th So You Want to Sing books in what will eventually be a 20-book series.

Although most of the series has been dedicated to contemporary commercial music genres—including blues, country, and folk—the latest books focus on the music of a particular classical genre (chamber music) and the music of a specific classical era (early music). 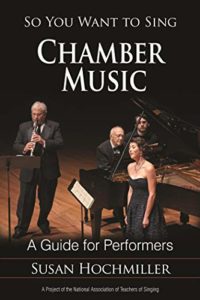 In So You Want to Sing Chamber Music: A Guide for Performers, author Susan Hochmiller outlines the purpose of her book in the Introduction. She sets out to help vocalists build knowledge of chamber music repertoire and confidence in their abilities to perform the music of this genre. She also provides instruction on how to prepare chamber music scores for rehearsal, how to choose repertoire that is suited to the needs of a given chamber ensemble, and how to use chamber music as a pedagogical tool in the vocal studio.

After the first chapter provides a brief history of chamber music, later chapters explore how to program vocal chamber music, including topics such as venue consideration, whether or not a conductor is needed, and how to arrange musicians on stage. Other chapters address how to communicate with instrumentalists and how to perform with authentic performance practice and style based on musical era (early music, baroque, classical, romantic, modern, and new music). Two appendices further bolster the book’s offerings. The first is an annotated list of art songs for voice and guitar compiled by James Maroney, and the second is an essay on the importance of “sacred solo duets,” which was written by noted repertoire specialist (and Hochmiller’s first voice teacher) Joan Frey Boytim.

Hochmiller adroitly explains that vocal study often results in a limited focus on individual musical lines rather than a broader understanding of a score in its entirety, with specific attention given to the synthesis of numerous parts. Studying chamber music, on the other hand, looks beyond any one individual’s concerns in order to develop collaborative awareness, the ability to make collective decisions, and teamwork. These ideas are explored more thoroughly in the chapter titled, Why Sing Chamber Music?.

One of Hochmiller’s more salient points comes in that same chapter. She writes, “While chamber music provides an outstanding opportunity to enhance collaborative skills, it must stem from the most important attribute that is required of all professional twenty-first-century musicians: intellectual curiosity. The most successful collaborators are stimulated by the desire for knowledge about instruments, have an interest in analyzing the sum parts of a score for a more inclusive performance, and possess enthusiasm for boldly expressing oneself within the context of a cooperative musical dialogue.” (p.22)

Hochmiller points out that many of the most celebrated composers of classical music have written pieces for voice (or a combination of voices) and instruments—including Brahms, Mendelssohn, Fauré, and Poulenc. Even so, she decries the lack of scholarly resources available on vocal chamber music, noting, by contrast, that there are countless resources dedicated to chamber music for instrumental ensembles. In this regard, So You Want to Sing Chamber Music is a much-needed and long-overdue contribution. 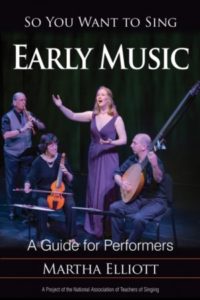 The 15th book in the So You Want to Sing series is the first volume dedicated to music of a specific time period. So You Want to Sing Early Music: A Guide for Performers is written by Martha Elliott, who has been a member of the performance voice faculty of Princeton University since 1985. Her first book, Singing in Style: A Guide to Vocal Performance Practices (Yale University Press, 1986) explored four centuries of historical performance practice. Her new book, however, narrows its focus specifically to the baroque era by “putting its repertoire and style in context by examining medieval and Renaissance trends.”

In the Series Editor’s Foreword, Matthew Hoch describes the target audience of So You Want to Sing Early Music as singers and voice teachers who are trained in Western classical art song and operatic literature. He feels that a book dedicated to early music is particularly needed since there is a tendency among university and conservatory programs to focus overwhelmingly on the repertoire of later eras.

Hoch also highlights how historically informed performance (HIP) practices have impacted audience expectations regarding early music. Even so, Elliott stresses how accessible early music can be when performers have some background information on the development of music notation and music printing and publication, writing, “You don’t need a degree in musicology to sing this repertoire…”

As in most of the So You Want to Sing books, Elliott offers chapters on the history of the era and the pertinent elements of style. Other chapters discuss the role of specific instruments in baroque ensembles and how to evaluate scores ranging from scholarly editions to manuscripts and facsimiles to free online scores from sites like the International Music Score Library Project (IMSLP) and the Choral Public Domain Library (CPDL). The final chapter provides information on academic programs in early music, summer workshops, young artist programs, and early music festivals. The book concludes with three appendices by guest authors: So You Want to Be a Consort Singer? by Gabriel Crouch, Singing with Players by the members of the Viola da Gamba Consort La Spirita, and Approximating the Past by Jamie Reuland.

Of particular interest is the chapter titled Grandfathers of Voice Pedagogy. Here, Elliott summarizes early voice treatises in order to offer glimpses into how that understanding of voice function and pedagogy may have influenced how early music vocal repertoire would have been performed. She admits that modern understanding of anatomy and voice science has rendered some of these early teachings irrelevant, while other more timeless elements have lasted across the centuries. Regardless, the chapter sheds light on the vocal perspectives of the day and offers readers a vocal “flavor of the period.”

The main emphasis of So You Want to Sing Early Music is to highlight the numerous styles of vocal repertoire of the 17th and 18th centuries, ranging from solo songs with lute to secular and sacred cantatas to five- or six-part consort music and even to early opera. This also helps illuminate the diversity of vocal skills that are called for in this wide-ranging era. Arguably, however, the book’s greatest attribute is the context it provides. Elliott expertly reveals the styles and trends that evolved over centuries to form our current understanding of baroque performance practice. In this way, So You Want to Sing Early Music serves as a thorough introductory guide to the history, vocal approach, and style of early music.

Both So You Want to Sing Chamber Music and So You Want to Sing Early Music include the two chapters found in each book of the So You Want to Sing series on voice science and vocal health by guest authors Scott McCoy and Wendy LeBorgne, respectively. They also provide additional, free online resources, which are available at https://www.nats.org/So_You_Want_To_Sing_Book_Series.html

Tenor Brian Manternach teaches voice at the University of Utah in the Musical Theatre Program. He holds degrees in vocal performance from Saint John’s University in Minnesota (BA), the University of Wisconsin-Milwaukee (MM), and the Indiana University Jacobs School of Music (DM). He can be reached at bmantern@gmail.com.

Joanie Brittingham is a soprano and writer living in New York City. She can be reached at joaniebrittingham@gmail.com. Visit her blog, Cure for the Common Crazy, at commoncrazy.blogspot.com or see her column, Big Apple Sauce, on the arts scene of New York, at the website JuicyHeads.com.