The book What Every Singer Needs to Know About the Body provides an in-depth exploration of Body Mapping and how those concepts and practices relate to singing. Specifically, the authors provide information designed to help readers build accurate mental conceptions of how their bodies work, which can lead to increased physical efficiency when singing. 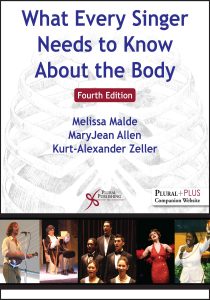 When the third edition of the book was published in 2017, I interviewed the three co-authors—Melissa Malde, MaryJean Allen, and Kurt-Alexander Zeller—for the December 2017 issue of Classical Singer. Now that the book has been released in a new fourth edition, I reached out to the authors again to learn what updates, additions, and inclusions can be found in the 2020 version of the book.

Overall, there is updated and revised content throughout the text, an expanded glossary, and updated links to recommended videos. Additionally, there is information on biotensegrity and how it pertains to Body Mapping, along with links to resources on the subject.

MaryJean Allen, author of the first two chapters of the book, provides a brief introduction to biotensegrity in chapter two. As defined in the book’s glossary, tensegrity is “An architectural term…referring to structures that rely on discontinuous compression and continuous tension to maintain their structural integrity.” Therefore, biotensegrity is “The application of the concept of tensegrity to the body, conceiving of bones as discontinuous compression elements connected by a continuous tensional web of soft tissues, especially fascia.”

As an Alexander Technique teacher, Allen has been teaching concepts of biotensegrity for several years, so she appreciated the opportunity to bring those concepts to What Every Singers Needs to Know About the Body. “It was wonderful to really delve into the subject of biotensegrity and to search for, and then find, the most recent and also clearest explanations of it (easier said than done because there is a LOT of ‘scientific’ language),” she says. “Finally, I endeavored to write about biotensegrity in a succinct and clear manner.”

Allen also adjusted some of the language in her chapters, based on new terminology being used within Body Mapping. “For most of our explanations, instead of saying ‘weight-bearing’ we instead say ‘weight-distributing’ or ‘weight-delivery,’ because overall, both are anatomically ‘more correct,’” she says. “Also, Body Mapping teachers now say ‘Dynamic Balance’ instead of just ‘balance’ in order to emphasize movement.”

Melissa Malde, who wrote the third, fourth, and fifth chapters, also incorporates ideas related to tensegrity, building on Allen’s introduction. In addition, she brings new “discoveries” to her chapters. First, there is a greater understanding of the complexity of the origins and insertions of the buccinator muscles. Second, she emphasizes that the diaphragm “pulls, not pushes,” and that the central tendon is pulled down by the stem of the diaphragm, which is connected to the lumbar spine. Third, she acknowledges that muscle fibers that fan out from the central tendon to the ribs contract, pulling the lowest ribs up toward the central tendon. Finally, she recognizes that the tensor veli palatini is connected to the Eustachian tubes and that it is one of the muscles that, when engaged, raises the velum and can be used to pop your ears when equalizing pressure (as occurs when ascending or descending on an airplane).

Malde also added more YouTube videos and links to websites for additional reference as well as bulleted reviews after each significant section of her chapters.

Kurt-Alexander Zeller also incorporated concepts of biotensegrity in his chapters (six and seven), especially as they relate to expressive gesture. He also incorporated the new format of adding review summary points at the end of every major section, as his co-authors did.

The primary upgrade in Zeller’s chapters, however, came in the media resources. Besides providing additional links to videos from outside sources, Zeller completed seven new videos of his own, which were made specifically to accompany all the exercises in Chapter Six. Considering that previous editions of What Every Singer Needs to Know About the Body included only audio examples, this inclusion indicates a significant enhancement of the supplementary materials that accompany the book.

The Association of Body Mapping Education (formerly known as Andover Educators), its founder Barbara Conable, and its advocates have brought the concepts of Body Mapping to artists of all varieties, as evidenced by the library of What Every _____ Needs to Know About the Body books for pianists, violinists, trombonists, flutists, dancers, and, more generally, musicians.

What Every Singer Needs to Know About the Body is already a well-read, well-used, and well-respected resource. This newest edition from Plural Publishing, Inc., already brimming with practical, useful information, packs even more resources into its pages and supplementary materials, further solidifying the book’s reputation among singers, voice teachers, and vocal pedagogy instructors.