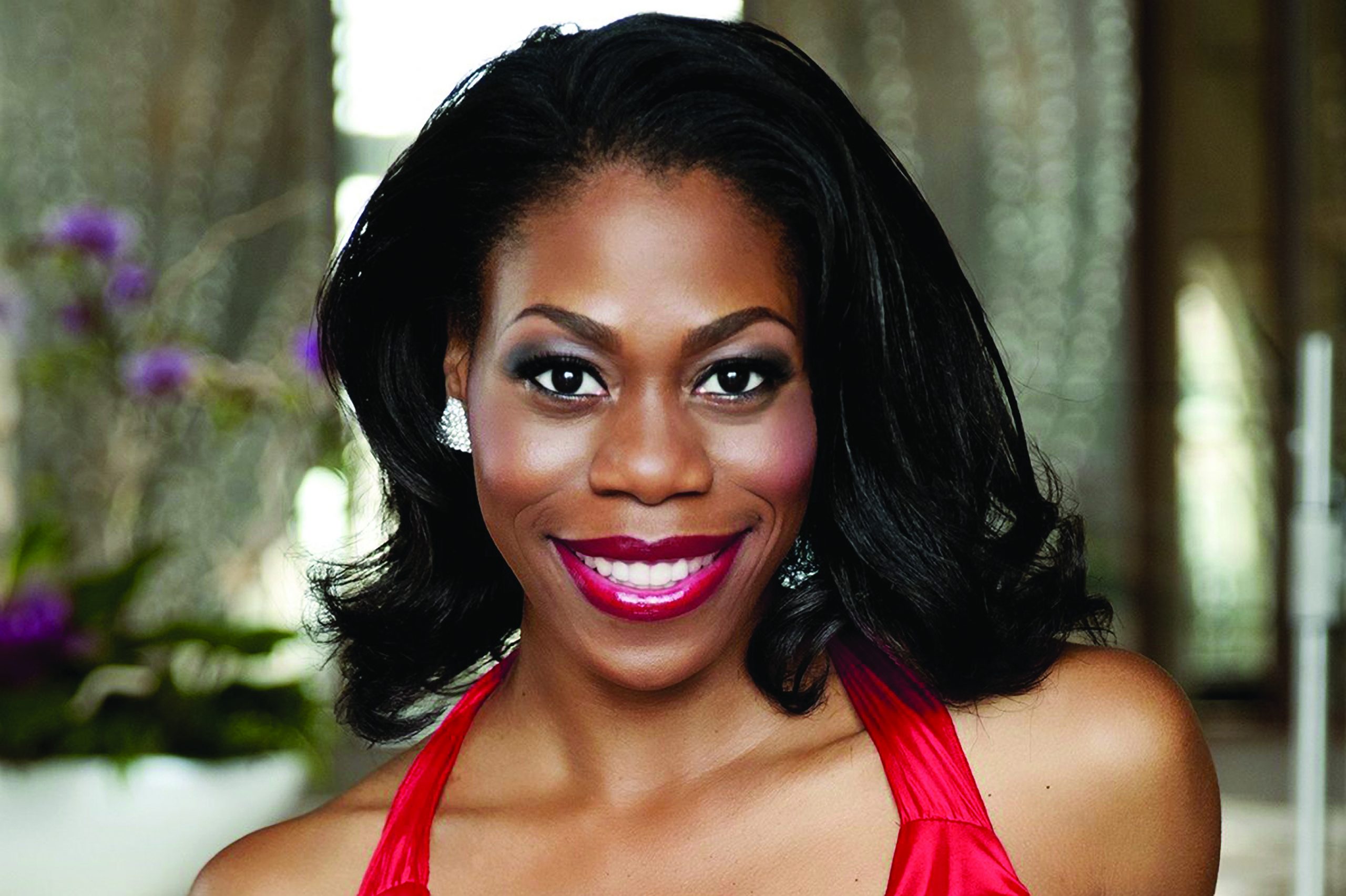 hen conversing with Chrystal E. Williams, it’s difficult not to get swept up into a whirlwind of infectious energy. It radiates through her fiery eyes, broad smile, and larger-than-life personality as she joyfully reflects on what music has meant in her life, her faith, her family, and her will to make the world a better place through singing.

And that’s before she has opened her mouth to phonate one note.

The 34-year-old mezzo-soprano steadily has crafted a name for herself in recent years, mesmerizing audiences in opera houses with roles ranging from Maketaten in Akhnaten with the Metropolitan Opera to Rosina in Il barbiere di Siviglia with Sarasota Opera and Pine Mountain Music Festival, Elizabeth Keckley/Coretta Scott King in Appomattox with Washington National Opera, Hänsel in Hänsel und Gretel with Knoxville Opera, Charlotte in Werther with Baltimore Concert Opera and OperaDelaware, and Rebecca Parker in YARDBIRD with Atlanta Opera, Arizona Opera, Hackney Empire in collaboration with English National Opera, and the Apollo Theater under the auspices of Opera Philadelphia.

She has appeared as Katerina Ismailova in The Lady Macbeth of Mtsensk District, Dido in Dido and Aeneas, and Hannah in The Ice Break, all with Birmingham Opera Company in the United Kingdom. She also has originated roles such as Yvette in the world premiere of The Garden of Martyrs.

Handfuls of other roles and collaborations with symphony orchestras and chorales throughout the world have helped chart a promising course for the budding vocalist’s career path.

But despite a blossoming presence onstage and her vocal prowess that demands to be noticed, it’s her work behind the scenes that speaks volumes.

Even before making her professional debut, Williams established a reputation for giving back, putting faith and gratitude first, and helping set the stage for the next generation of operatic performers.

“It’s just the right thing to do,” Williams says during a recent Zoom interview from the Pennsylvania home she shares with her husband of two years, who also is a musician. “It has been a very unique journey. I’m really happy that I’ve been able to perform a lot of new music and quite a bit in English, as well as some of the old-school standards and a lot of concert and recital work.

“But I think I always learned from my upbringing in Virginia about the idea of giving back. It was engrained in me to write thank you letters and cards by hand on opening nights. I’ve always loved to do that and kept that up. It’s just a little part of me to express.

“As singers, we can’t do this career by ourselves. Everyone from the costumers to the backstage crew play an integral part. I appreciate them. We’re a team. And opera is one of the only art forms that includes so many other art forms together, as one.”

Williams was in middle school when a performance ensemble traveled to her Portsmouth, Virginia, stomping grounds, offering her a first glimpse into the world of classical music.

“I was in sixth or seventh grade and I was mesmerized,” Williams says, her eyes lighting up even years later. “I had no idea what was going on, but I was just vibrating. The music was so cool, and I could just tell there was something about classical music.”

Her interest piqued, Williams auditioned and was accepted to the Governor’s School of North Carolina, which caters to gifted high school students integrating academic studies with various artistic disciplines.

Although she was welcomed into the school’s vocal department, Williams wasn’t certain at that point that singing was her calling.

“I didn’t actively pursue music at first,” she says. “I wanted to help people. I thought maybe I’d become a school teacher or get into chemistry, physics, or biology to cure the world of everything.”

It was during a trip to New York that Williams would hear soprano Leontyne Price perform live. Williams points to the experience as having a profound effect on her, as her eyes and ears were opened to the power music could harness.

Prior to embarking upon her collegiate studies in 2004, however, she launched the Chrystal E. Williams Scholarship. The annual donation-based recital, “An Evening with Chrystal E.,” presented for free by Williams to audiences in Norfolk, Virginia, each June, helps provide funding to students aspiring to pursue a career in the performing arts.

“It’s a huge way for me to give back to the area that I’m from,” she says. “It also lets people see that opera is not this isolated thing. They get to see one of their own up there, actually doing it.”

Easing into a professional career following her studies has only helped Williams to further fall in love with the operatic art form.

“I love that it’s very vulnerable and very honest,” she says. “It combines different art forms and creates an atmosphere that is genuine and full of truth and authenticity, and I love that. Being able to break barriers through music and touch the parts of people that make them tick in a way that we can all relate is an incredible feeling. Music did that for me. To be able to provide others with an experience that can stay with them—that’s how you help people.”

Along with being an ambassador for classic opera and new music, Williams also takes pride in being a representation of diversity onstage, namely for Black singers that traditionally haven’t received equal opportunities in the art form.

For singers, conductors, casting directors, and audiences who believe those who are Black don’t sing opera, Williams has just four words: “Yes, we absolutely do.”

“We’ve made some ground along the way,” Williams says of diversity in opera. “But even when I was in school, there were people who would tell me I wouldn’t be cast because of how I looked. That wasn’t that long ago. So, we still have a long way to go.”

Part of the solution, Williams adds, is organizations with an eye toward bringing opera into communities with limited access—much like she experienced.

“For me to be able to see someone like Leontyne Price made all the difference in the world,” Williams says. “There was someone who looked like me, singing opera professionally. I needed that. To be able to go into schools now and have that kind of an impact, where young people can see someone whose skin looks like theirs and whose hair looks like theirs and sings opera—that has a huge effect on the entire direction of the future of the art form.”

The other solution lies behind the casting table, Williams says, adding that the color of her skin always remains a factor on her mind upon every audition.

“The people in those positions need to search their hearts to know if they really want the situation to change. They have to ask themselves the really difficult questions. Then, they need to actively make that change happen if they really want it to happen.”

As for singers of color or any minority group, Williams says, they need to feel empowered to keep pressing forward.

“If you have the calling to music, you need to answer it,” she says.

Steadfast to her faith, Williams says that her relationship to God and family are paramount, particularly as the industry treads unfamiliar waters in a post-pandemic performance world and exciting projects and collaborations once on the horizon now hang in uncertainty. Among them was Williams’ debut in the title role of Carmen and premiering her own composition work.

The time away from performing due to COVID-19 has also provided refreshing insights into the root of Williams’ passion. It also has enabled her to spend some quality time with her husband, with music, and with the faith the connects it all.

“I told God early on, ‘I love this career. But if it gets in the way of my relationship with you, I don’t want it,’” Williams says. “God has brought me to who I am and to my calling in life. Handing everything over to God takes all the pressure off. That’s huge for me. That’s the root of who I am.”

Williams also says she believes that to be truly successful one must be aligned in mind, body, and spirit—a philosophy she strives to embody above all else.

“This was supposed to be a big year for me, with big debuts, and a lot of those have been canceled due to COVID,” she says. “I’m not going to lie. It’s a bummer, and it’s disappointing. And I did go through a period of time when I wondered if I still wanted to sing.

“But what this time has done is given me the space for different avenues of creativity, and that has been inspiring. It has allowed me to come back to really loving to sing and realizing that, yes, I do want to do it. I do want to create. Who cares about my 10-year trajectory?

“I love the idea of being a diva. But opera singers are just people too. I want to sing for me, and I want to sing to help people break down these walls, embrace our differences, understand that we’re all unique, and that we need everyone to share in our one story.”