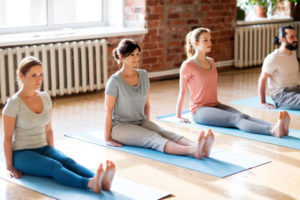 It was an opportunity I felt as though I had been preparing for since my studies in classical voice began.

Singing the role of Charles Gounod’s magnificent Juliette was something that had found a cozy home on my vocal bucket list since my undergrad, spending hours in a practice room, plunking notes at a grand piano, and working my cords around the delicate, yet exuberant melismatic passages of the tragic heroine’s bold and brave aria, “Je veux vivre.”

Now all grown up and with many roles under my breastplate, my stab at Juliette had finally arrived—pun intended. And to prepare, I did something a little unorthodox. Because of the vocal demands of the role—and because Juliette often is staged with the character singing from a heap on the floor—I sang through the portions of the role while holding various yoga poses: plank, side plank, crow, boat, downward-facing dog . . . .

Allow me to explain.

A year-and-a-half prior to Juliette, I stumbled into my first hot yoga class at the encouragement of my friend and accompanist. I was hooked. As a vocalist, yoga’s focus on breath and movement almost instantly made a noticeable impact on my voice through my breath support, my phrasing, and the focus of my sound. But it also provided valuable insight on the overall awareness of my body, from my connection to my core to my ability to find more space in my rib expansion and length in my posture.

Even more than the physical aspect, yoga’s emphasis on meditation further enabled me to calm my body and quiet the voices in my head that went against all of the growth I was working to accomplish as a young artist.

As it turns out, I was not alone.

From opera to pop, singers have embraced yoga—and various other types of physical fitness—in order to fine tune their instrument, build strength and stamina, and still the mind to align it with the body and spirit. The National Association of Teachers of Singing (NATS) includes a “Yoga for Singers” session among its annual national conference offerings—the most recent led by Linda Lister, certified CorePower Yoga teacher and author of the book Yoga for Singers: Freeing Your Voice and Spirit through Yoga. And several resources are readily available for singers looking to tap into their Zen.

The Perks of Being a Lotus Flower

Eager to learn more about yoga and its influence on the voice, one of the best resources I have come across is from singer and yogi Sarah Whitten.

Whitten came into singing later in life. Falling two credits short in her undergraduate studies in English, she thought voice lessons would be an easy way to make them up in order to graduate. That’s when her trajectory changed.

“I walked into my first voice lesson, and they said, ‘Where have you been for four years?’” Whitten says, laughing.

She began pursuing studies in classical voice, which ultimately led her to completing her master’s degree in vocal performance and pedagogy from the Ohio State University, as well as performing and teaching. But it wasn’t until a friend casually invited her to attend a yoga class that everything began to align.

“I had never been to a class, and when I got home from it, I felt so exhausted,” says Whitten, who already maintained an active and athletic lifestyle. “I had a voice lesson, and I thought, ‘How am I going to sing?’”

But something amazing happened.

“I sang, and it was just effortless,” Whitten says. “My voice teacher asked, ‘What were you doing before this?’ I said, ‘Yoga.’ She said, ‘Well, you better keep doing it.’ The biggest thing that I noticed was that I was relaxed. Because I already was very active, I viewed yoga as an athletic endeavor. This was the first time I had experienced a physical activity that could calm my busy mind.”

The discovery further sparked a natural desire in Whitten to learn more about the anatomy and biomechanics of the body and the voice and how yoga could better connect the two.

Today, the mom of two who overcame many of her own vocal and physical hurdles through her yoga practice is a Boston-based 500-hour certified yoga teacher, with 20 years of experience on her mat. Additionally, she has studied yoga therapy with some of the top practitioners in the United States and completed additional coursework in voice disorders through the MGH Institute of Health Professions and the Estill Voice Training and Somatic Voicework. She also has led yoga sessions through regional conferences with NATS.

Whitten recently launched the Singers’ Learning and Movement Library via her website,
www.sarahwhitten.com. The series of workshops and movement classes is designed to help singers, as well as voice teachers, take charge of their bodies, identify patterns of tension and weakness, and bridge the gap between pedagogical practices and how an individual’s body functions.

Every voice and body is different, according to Whitten. But yoga can help to instill the practice of mastering the body by moving with intention, control, and coordination as well as enabling vocal professionals to free the body, the mind and, as a result, the voice.

“Every voice has its challenges, and most teachers focus on the vocal technique when it comes to correcting those challenges,” she says. “There is not always the focus on the body. But the whole body is your instrument in singing. So often we’re going for the quick fix for the problem, but what we should be doing in working toward a permanent fix. So much of that lies in the body.”

Whitten believes that’s changing, however, as she and other teachers have begun bringing lessons from the mat into the voice studio. And though many studios might not focus their efforts on the voice specifically, finding a place to practice yoga in your community is worth it, Whitten says.

“There is such a value in simply going,” she says. “There are so many different styles, so you want to find an environment that works for you and your body. Look for certified teachers that explain the proper way to do the poses and how you’re benefiting from those poses. Understanding the engagement of areas of your body like the pelvic floor, the lower back, and the sides and abdominal region, as well as other areas you might hold onto tension, are important in order to make the connection to the voice and to get the most benefit from it.

“And you don’t need to worry about being flexible,” Whitten continues. “In so many magazines, you see pictures of these beautifully thin bodies that are incredibly flexible. But if you’re inflexible, yoga is the place for you. You are the person it’s meant for. The person who can easily throw a leg over the shoulder probably might want to pick up some weight training so they don’t damage their joints.”

And don’t worry about anyone else’s practice but your own.

“Most people I know who practice yoga come from a very compassionate place,” Whitten says. “As a teacher, I’m not ever looking at a student to judge them or their practice. I’m there to help them come into their practice and learn more about their body and their voice.”

For those who opt to practice at home, Whitten recommends a few supplies to add to your studio.

“If there is one thing I have found has an almost instant impact on the voice, it’s working with a tennis ball or a foam roller,” Whitten says. “They’re great for calf-stretching or relieving tension in the back and shoulders by rolling over them. It can have a phenomenal effect on the body and voice.”

Other Ways to Fine Tune

To complement yoga, I also added another form of physical activity to the mix: cycling. It’s a great form of aerobic exercise, as well as building strength, expanding the lungs, and developing stamina in the voice.

A conversation with a friend and fellow musician who described cycling as a kind of “rhythmic cadence” with an emphasis on diaphragmatic breathing was enough to inspire me to hop on my Trek in preparation for “Domine Deus,” with its ever-so-lengthy phrases, from Vivaldi’s Gloria.

To challenge myself and even out my legato phrasing, I would sing the melismatic passages on a lip bubble while riding up a slight incline. It was tough. But by the time the performance came around, I could sing through the phrases with ease and breath to spare.

Running and swimming have been shown to have similar results.

It’s not such a strange concept, as some singers have been known to vocalize on treadmills and while doing other physical activities. The practice has been coined “cardio singing” and it’s a go-to for singers such as Beyoncé, Kristin Chenoweth, and even singer, actor, and fitness and health motivational speaker Thomas Forde.

“I became interested in fitness because I had struggled with weight issues for most of my life,” says the 35-year-old Chicago-based bass-baritone. “I loved food more than I loved anything, I had a thyroid disease, and I never had time to work out. I identified early on in gym class when we’d have skins-versus-shirts games and I’d get poked fun at for looking different that this was a struggle for me.”

Forde’s weight fluctuations continued as he began to establish his professional career. It wasn’t until years later, upon pursuing his dream of performing and entering Young Artist Programs the likes of Santa Fe Opera and Zurich Opera that he was told by directors—and a doctor—that he was overweight.

In addition to becoming more mindful about eating healthily, Forde took up his fitness regimen, which he has faithfully maintained even with a nomadic lifestyle that finds him traveling for opera, musical theatre, television, and commercial work.

Forde’s practice of choice is high-intensity interval training, which builds muscle and burns fat through a strategy of alternating short periods of anaerobic exercise with recovery periods.

Since 2010, Forde has lost approximately 100 pounds. He also has noticed a marked difference in his singing.

“It made a difference in my sound, in the way I expanded when I took a breath, and how I relaxed into my low support,” Forde says.

But the biggest thing it has brought to Forde is a greater sense of balance between his personal and professional life—something he strives to help other performers attain who likely can relate to the unique challenges they might face in keeping fitness at the forefront while working in an industry that can pose unique challenges.

“It’s great to be fit,” he said. “But the goal should be becoming fit for yourself and not for an outside source. Your health should be the priority.”

A Few Yoga Poses to Try

For posture and alignment

Tadasana (Mountain Pose)
To align the spine and lift the chest.

Utkatasana (Chair Pose)
To build strength in the legs, abdominal muscles, and external intercostal muscles, which help in keeping the rib cage lifted.

Uttanasana (Standing Forward Fold)
To release tension in the lower back.

Utthana Prisana (Lizard Pose)
To open the chest and stretch muscles in the upper back.

Bhujangasana (Cobra Pose)
To build strength in the upper back.

Ardha Salabhasana (Locust Pose)
To build strength in the abdominals, the spine, and the glutes.

Urdhva Mukha Svanasana (Upward-Facing Dog)
To open the chest and lengthen the front of the body.

Vasisthasana (Side Plank Pose)
To build strength in the abdominal muscles, legs, and arms and stretch the intercostal muscles.

Matsyasana (Fish Pose)
To stretch the intercostal muscles and the upper back and neck and promote stimulation in the throat.

Marjaryasana (Cat Pose)
To release tension in the neck and back.

Bitilasana (Cow Pose)
To stretch the neck and chest.

Simhasana (Lion Pose)
To release tension in the tongue, neck, and face.