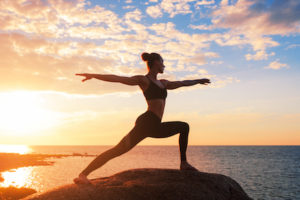 When I began practicing yoga nearly three years ago, the effects it had on my vocal technique were almost immediate, from discovering more space for effective breath support to finding efficient vocal placement, greater vocal freedom, and the ability to calm and quiet my mind prior to auditions, performances, competitions, and musical preparation. Fascinated, I quickly began to explore the correlation between my yoga practice and my vocal performance. And as it turns out, I’m hardly alone as singers from classical to pop and rock are also realizing personal correlations between the two.

Here we’ll explore the benefits that certain yoga poses can have in helping singers discover greater access to their instruments by focusing on the core as well as the pelvic floor.

According to Linda Lister, author of Yoga for Singers: Freeing Your Voice and Spirit Through Yoga and certified CorePower yoga teacher, the root of a healthy yoga practice, much like singing, can be found in proper alignment. “When I began working in opera, I found I wasn’t dancing as much,” she says. “So, to keep in shape, I began practicing yoga. And I discovered that so much of it corresponded to what I did as a singer, particularly in the importance of alignment—our favorite thing as singers, because it emphasizes the expansion of our rib cages and our posture.”

Yoga came somewhat naturally to Lister, who began her artistic journey in musical theatre as a dancer before moving into opera as a singer, composer, director, and associate professor of music at the University of Nevada–Las Vegas. Her most recent work recently debuted. State of Grace is a one-act opera about a yoga teacher named Grace who, after a breast cancer diagnosis, finds new meaning in the yoga principals she has taught for years.

Lister has also led sessions on yoga for singers at universities across the country, as well as at Emerald City Opera, Druid City Opera Workshop, Taos Opera Institute, and Karmany Yoga. Additionally, she has presented at national conventions of the College Music Society, the International Congress of Voice Teachers, and the National Association of Teachers of Singing.

“For singers, when it comes to posture, we think of standing well with that noble, high, and open chest and high sternum,” she says. “In yoga, we talk about opening the heart to engage the intercostal muscles and open the ribs—something singers use and many students can sometimes struggle with.”

Warrior I and II: Strengthens the legs, opens the hips and chest, stretches the arms and legs, and emphasizes balance and grounding.

Reverse warrior: Stretches the sides of the torso and arms, opens the hips, and builds lower body strength.

Triangle: Engages the whole body, strengthens the core, opens the hips and shoulders, and stretches the legs.

Upward-facing dog: Opens the chest, aligns the spine, and strengthens the whole body.

Chair: Strengthens the lower body and stretches the upper back.

Camel: “Opens” the heart and expands the chest.

In Line with Posture: Balance

With proper body alignment—which not only aids posture but helps protect the body from injury in yoga—Lister says that remaining grounded and centered in the body is just as important in vocal production. And there are several poses in yoga that can assist. “Singers sometimes have the tendency to want to shift their weight,” she says. “But in both yoga and singing, you want balance. You want to feel your weight evenly distributed and in the center of the body.”

Balancing poses also give way to greater concentration and focus. “It’s helpful to have a focal point—what we call a drishti in yoga,” Lister says. “Let the focus of your eyes fall in and out in a soft gaze. What you don’t want to be is a deer in the headlights.”

Lister says that two of her favorite poses include tree and eagle—both of which can be practiced on one leg (in tree with the foot pressed into the inner calf or thigh, and in eagle with the legs wrapped) or by using the alternate leg as a “kick stand.” Both are great for beginning yogis, but even those more experienced can continue to reap their benefits.

“In my practice of these poses, I also like to point out shoulder tension,” she says. “It can be easy to bend too far over in the pose and ball up. But remember to align. Release the shoulders rather than rounding into tension.”

Tree: Increases balance, focus, memory, and concentration and strengthens the knees and ankles.

What It Means When We Refer to “the Core”

Tying both alignment and balance together is the work produced by the body’s midsection—known as the core. “For me, core in singing and core in yoga are one in the same,” Lister says. “When we talk about core, we’re referring to the whole system—your torso and your trunk. And to develop those, we’re not looking for rock abs but for engagement and flexibility—never locking the breath.”

Poses that Emphasize the Core

Aside from keeping the core engaged in singing and in practicing yoga, there are a variety of poses that help build engagement.

Cat: Improves posture and balance, strengthens the neck and spine, and stretches the hips and abdomen.

Dolphin: Stretches the hamstrings, calves, and arches and strengthens the upper body, shoulders, and legs.

Plank: Strengthens the upper body and shoulders as well as the muscles in the spine that aid posture.

Side plank: Stretches the side body and the intercostal muscles and strengthens shoulders.

Chaturanga Dandasana: Emphasizes alignment while building strength throughout the body.

Happy Baby: Releases the lower back; opens the hips, thighs, and groin; stretches the hamstrings and spine; and can relieve stress and fatigue.

What Is the Pelvic Floor and How Does It Pertain to Vocalizing?

Beyond the core, many voice teachers have emphasized the role the pelvic floor plays in developing a strong support system to aid vocal production. “I think of it as breathing to the lowest part of yourself,” Lister says. “When you think of your core, your torso, or your trunk, the pelvic floor is included. It doesn’t stop at your abdomen. Otherwise, in singing, you’re only breathing to a third of that portion of your body.”

In addition to the importance of breath in phonation, a good, low breath can also soothe nerves. “Slow breathing—inhale for four counts and exhale for four counts—as well as mantras can help tame that fight-or-flight response that is primitive in us when we get nervous,” Lister says. “Ujjayi breathing—which is a slow, audible breath—also is a great way to shake phlegm off of the vocal cords, rather than clearing your throat.”

Poses that Emphasize the Pelvic Floor

Lister says that in terms of poses, lunges are beneficial. “They help engage the pelvic floor,” she says. “They also add to a sense of balance and alignment between the chest and the torso. Lunges are wonderful poses for integrating foundation and making your movements more agile onstage.”

Low lunge: Releases tension in the hips and stretches the hamstrings, quads, and groin.

High lunge: Opens the hips as well as the chest. Also stretches the groin, legs, and spine and strengthens the lower body.