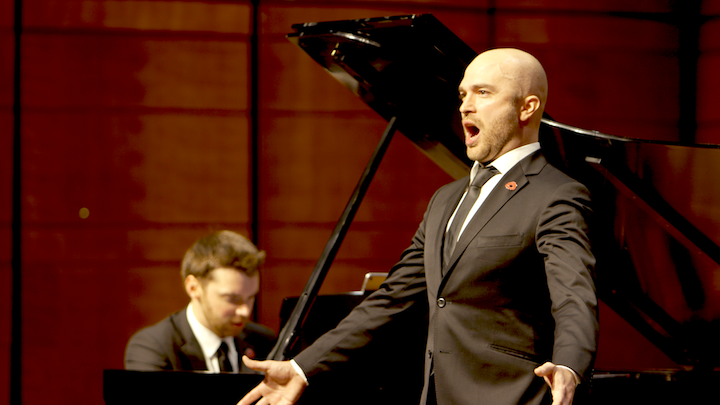 In between his final performances of Opera Frankfurt’s new adaptation of Lost Highway, Brancy found time to write to me about his career since winning the 2007 Classical Singer Vocal Competition in the Classical High School Division.

From September 28 to November 12, 2018, you embarked on a nationwide recital tour entitled “A WWI Memorial in Song.” What are some insights surrounding your creative conception and inspiration for the recital?

It was inspired when pianist Peter Dugan and I were asked to put together our first official recital program for our 2014 Kennedy Center debut, which was our professional debut as a duo. We wanted to perform music that needed to be heard and we decided that since it was the 100th anniversary of World War I, we would consider the repertoire of that time in our history. What we uncovered was a treasure of music in varying styles from composers who fought in the war. We have spent the past four years uncovering more and more of this forgotten music and have grown incredibly close to the stories and themes that are present in this dynamic repertoire.

We always hoped to set up a substantial tour for ourselves, but we never imagined it would materialize in quite the way it has. Last fall, situated around the 100th anniversary of the end of World War I, we embarked on a 12-city tour to universities, museums, military academies, and concert halls throughout North America performing our “Memorial in Song” recital programs—“A Silent Night: A WWI Memorial in Song” and “Armistice: The Journey Home”—for discerning audiences of all ages and backgrounds.

Dugan and I are very proud to have turned this vision into a reality and we feel that it’s only the beginning of what is possible with a little entrepreneurial spirit and imagination. We believe there is a resurgence of interest and need for art song and we want to lead by example with this project.

Please expand upon some of the other entrepreneurial aspects of creating and performing such an innovative and wide-reaching artistic endeavor.

For this tour, we aimed to connect with some key social partners to share our content and get the message out. The great thing here is that all our presenters have well maintained social channels with a lot of followers and engagement. Many of them committed to share our content from the get-go, and we have connected with other channels to partner with us throughout the tour. For young artists and musicians to be heard and seen, it’s important to put out great content that channels such as Classic FM are interested in sharing. Maintaining these partnerships are key as well—you don’t want to inundate them with work, but you want to stay consistent and up to date with your various projects.

Another major component of our tour was live streaming. We had a handful of the presenters committed to live streaming our concerts on their social media channels. This is such a simple add-on for most presenters, yet it’s something that isn’t always done, especially for ticketed events.

I feel it’s always worth asking the presenter of your recital or show if they have an in-house AV team that can live stream onto their social channels. It helps build buzz and draw in way more people from the web. We were particularly excited about the live stream events that took place on the 100th anniversary weekend when we performed at the Smithsonian Institute and the Kennedy Center!

We wanted to create some compelling content that will have a lasting effect on our closest fans and give our work access to an entirely new audience of people online. You may have heard the phrase “content is king”; this phrase is accurate and important to recognize. I have been putting out content consistently for the past four years with this project, and it is paying off.

Content creation is not cheap. Whether you are looking for an album or specialty video work, you want to be sure you have a budget in place to complete it at the highest level. This is an investment that is truly worth pursuing. I’ve been lucky to have Erik Braund as my producer these past four years, and I’m certain our collaboration is just in its infancy!

There are several avenues to take when seeking funding for high-level artistic pursuits. Whether you are looking to your local state arts council, private foundations, personal arts philanthropists, or government organizations, the task can at times be daunting. What was your experience with the process of receiving of a commission, and how did you use it?

In 2015, we became centenary partners with the United States World War I Centennial Commission (WWICC). Back then, the commission was an entirely volunteer endeavor, made up of some key executive members and a nationwide collection of state commissioners. We were a volunteer project up until just recently—last fall our commitment to their mission and to the centennial anniversary paid off. We were granted funding to create some amazing content, particularly for our performance at West Point academy for active and nonactive duty members of their community.

We showcased the maquette (the miniature sculpture design of the new World War I memorial which the commission is currently raising funds to have built in Washington, DC) and aligned our performance with the WWICC’s mission of remembrance and recognition of the war that changed the world. We wanted to show how the power of music, particularly vocal music, can change someone’s heart or make them feel something deeply about this not so distant past.

In our programs, the horrors of this war were felt in the music and the text. For me, singing these songs in this context, 100 years after this war, felt prophetic and important. We need to not forget that war is tragic—the enemy is not humanity or our fellow man, but war itself and the very nature of war.

Outside of the “WWI Memorial in Song” tour, you have also been on a recent competition winning streak. Please share some thoughts about what has contributed to this success.

These past two seasons have been a whirlwind for me on the competition circuit. I’m very proud of these accomplishments, but they didn’t come without a ton of work, focus, and preparation. I really have Dugan to thank for helping me ascend to these heights. Our collaboration was clearly valued by the jury, and he was deeply committed to the preparation process. At times, when the anxiety and pressure were high, it was Dugan’s calm, collected nature that helped me through the various rounds and ultimately to the win.

In preparing for these competitions, it’s important to always recognize that you need to pace yourself, so programming is key. Be sure you program something dramatic and well rounded for the first round, then something exciting and ecstatic for the semifinal. For the final, give all your heart and soul and make it as technically challenging as you can.

Classical Singer was the first competition I entered. I won first prize in May 2007 when I was still a high school senior. For me, that was one of the most exciting moments of the beginning of my singing career. It’s crazy to think that almost 12 years have passed by, but I already feel as though I’ve accomplished so much and have a ton to be thankful for in my career.

You have been recognized for your dynamic interpretations of text. What are some of your practicing and memorization techniques?

I have many teachers to thank for encouraging me to go deep on text. But it really was the acting training that I received at Juilliard that helped me to really tap into the deep aspects of my acting abilities. I worked with some incredible directors and acting coaches while studying at Juilliard. Sometimes, I would take one-on-one lessons with these teachers, and we would explore Shakespeare and other dramatic works.

Learning and understanding the art of acting is something I’ve always been interested in. I have found that through acting, one can find myriad ways to interpret text, poems, stories, and scenarios and deliver them truthfully and effectively in their performance. Learning music and memorizing are kind of one and the same for me. The process of learning music is quite repetitive and meditative.

I used to dread learning music and spending hours just to learn a few lines. Now that my musicianship has greatly improved and I continue to learn many styles of music, I find it very comforting and I feel that bringing a sense of joy and curiosity to the act of music-learning really helps speed up the process and solidify what you are working on. As a rule for me, I always perform recitals from memory—one time I had one week to memorize the entirety of 20-plus songs. One effective method of memorization is writing the poem and its translation out several times until it’s entirely locked in. It can feel like you’re stuck in a time warp, but this is one of the most effective methods of memorizing within a short timeframe.

What about future collaborations? Any thoughts there?

There are other composers, such as Matt Aucoin and Thomas Adès, with whom I’d love to create music. I think we are living in such an incredibly fascinating and exhilarating time for our art form, and the fact that we get to make music with these incredible composers is a dream come true.

I also feel that opera has a distinct opportunity to move into different genres. I’m hoping to work with composers from the gaming and movie industries. I’d love to explore operatic possibilities with the likes of Michael Giacchino, Clint Mansell, or video game composer Marcos “Lorn” Ortega. Another project I’m truly excited for is the next installment of Operation Superpower with composer and cocreator Armand Ranjbaran!

The dreams and the visions continue to expand, and there is truly so much to be excited for in opera and live stage work. 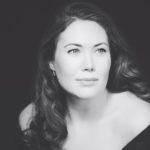