hose immersed in opera know all too well: though it comes with rewards, it isn’t a career for the faint of heart.

Readying repertoire, learning loads of languages, navigating busy schedules, traveling, and steering clear of illness set up unique challenges to those who have made it through the success gates.

Yet, somehow, singers Michelle Johnson and Brian Major have made it work—and all while throwing marriage, family, and other hurdles into the mix.

They were introduced by mutual friends. Though, it wasn’t exactly what either called love at first sight.

“We didn’t like each other,” Johnson says with a laugh. “People tried to force us upon each other saying, ‘Y’all should meet!’ We didn’t feel it at first, and we’re both very stubborn. So, we fought it a little bit.”

Luckily, when the couple met the second time around, when Johnson was working on her performance certificate and Major was working on his master’s degree—both in Boston, a small spark was ignited that continued to grow.

“It took some time, but eventually we became friends,” Major says. “One day, it just changed into something else.”

The couple—based in Ardmore, Pennsylvania, just outside of Philadelphia—have been together for nearly 12 years and married for 8. They have a 5-year-old daughter.

Separately, they also boast a pair of enviable careers.

A graduate of the prestigious Academy of Vocal Arts in Philadelphia, Johnson—a soprano—grew up in Texas in an area where instrumental music reigned and she followed suit, performing in band. However, she found her voice within the gospel music performed at her church before becoming enamored with musical theatre after auditioning for You’re a Good Man, Charlie Brown. 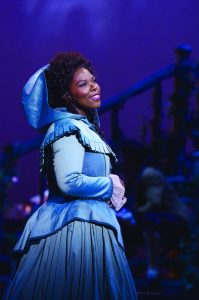 “It was my seventh-grade year, and the choral director came into the auditorium and asked, ‘Who is this?’” Johnson recalls. “My parents had already paid for my instrument, so at first, they wouldn’t let me drop band. I just wanted to sing. But one day, I got my dad when my mom was out of town, and he let me drop. So, I started singing in choir. That got the classical bug going a little bit.”

Not thinking singing could be anything more than a hobby, Johnson says it was during her senior year of high school that her voice teacher convinced her to at least try auditioning for a couple of music programs.

She did—and was accepted into the New England Conservatory in Boston.

“It changed my life,” Johnson says. “These were my people.”

It ultimately led Johnson down a path toward what she calls “this crazy career that chose me,” gracing stages with opera companies and singing in concert halls across the country—in addition to meeting her future husband.

Major, a baritone, also found his roots in singing within the church. And like Johnson, he initially took an interest in instrumental music as well.

“I really only sang on Sundays and Tuesdays in choir rehearsal,” he says. “I was a huge band geek. I wanted to go to college for trumpet.”

Upon auditioning and gaining acceptance to Morehouse College, a private and historically Black men’s school in Atlanta, Major says he was faced with a decision. He could either join the marching band or the glee club.

“For glee club, I could sit inside in the air conditioning—and marching band was outside in the Georgia heat,” Major says. “I chose glee club.”

It wasn’t long before Major was convinced to trade in his trumpet chops for vocal studies.

“When I auditioned, it was easier to audition for the entire faculty,” he says. “I was a good trumpet player. But they encouraged me to sing.

“When I was a freshman in college, I heard this CD by Bryn Terfel and was like, ‘Wow!’ I had never heard a voice like that. Hearing that grown-up, special sound—that was the moment I knew I wanted to do that.”

Major has also enjoyed a career that has taken him throughout the country with a plethora of opera companies as well as concert and recital work.

Even prior to walking down the aisle or starting a family, the couple was intentional about how they went about juggling it with demanding careers.

“We were long distance for about two or three years, and I think that was our trial,” Johnson says. “I think for both of us, this was our first relationship with a musician. And I always said I would never date a musician.

“I wanted stability in my life. But I let go of that with Brian because I had never had that connection with someone before. If we wanted to make it happen and wanted to be successful opera singers, we had to find what worked for us.”

And the singers have.

When they first began dating, they agreed not to go two to three weeks without seeing one another. They attended each other’s performances and they worked to coordinate auditions so they could find themselves in the same city at the same time.

When the couple wed and welcomed a child, that was another adjustment.

“A lot of people, especially old-school singers, tend to change course, thinking they can’t [sing] anymore because it’s either marriage and a family or your professional career,” Major says. “Many singers regret never having a family. We make it work. And for our daughter, this is normal. She loves hotels and rental cars. And she loves the opera.”

Johnson and Major also plan their schedules accordingly, overlapping engagements when they are able so that as one departs, the other arrives home.

“As women singers, our bodies are our moneymakers, but I sang all the way up to my eighth month of pregnancy,” Johnson says. “I think I might have hopped back in a little too soon. But if you’re a performer, you crave it and just have to do it. It’s different for everybody. We’re grateful that everything has just always seemed to work out.”

While family life has undoubtably posed one challenge for the couple who maintained active and busy careers prior to the COVID-19 pandemic taking hold, Johnson and Major shared that the hiatus has provided the space to reflect a little deeper about the events of the world, particularly as Black singers.

“That’s a touchy thing today, and in COVID times we actually have had the time to sit and think,” Major says. “We’ve definitely been in situations where we knew our color was looming in thought.

“The casting still has to work. But we can’t belittle ourselves. We can’t give our power to the person who thinks that way. Companies need to be willing to take more risks and go to bat for you. That’s where respecting artists of color comes into play.”

Johnson says that while she believes it has been easier for her as a Black woman to emerge into the field of opera than it has been for Major as a Black man—“It’s easier for people to accept a Black diva,” she says—she also admitted that diversity in casting and advocating for Black artists needs to be top of mind for opera companies.

Johnson shares instances from vocal competitions where, while she performed better, many of her colleagues who weren’t of color and who didn’t perform as well went on to receive contracts at top opera houses.

She was encouraged to keep trying. But it has given Johnson pause throughout her career as she’s wondered if her color was what prevented her from receiving the same chances.

“I used to find that as a Black singer, even when I was doing Young Artist Programs, I needed to be perfect and never have a bad day,” Johnson says. “I didn’t feel like my other colleagues, who could make mistakes and learn from them. I would love it if more companies had a little more faith and gave opportunities to Black singers.”

Major shares an experience he had auditioning for a prestigious institution. Upon being called multiple times to sing for faculty, he says he was suddenly and abruptly met with a “No, thank you.”

“There was never any reason given behind it,” Major says. “But this institution hadn’t graduated a Black singer in 30 years. A lot of it comes down to how people socially view Black men as aggressive. They don’t look past that and see us as artists. That hurts.”

In fact, Major stopped singing for two years because of the experience.

“That was it,” he says. “I knew I couldn’t go into the industry because I was always going to be perceived a different way. But in the years to come, I realized I had given all of my power over. People were going to hire me because I could sing. It made me stand stronger. I know better now because of it.”

When it comes to setting the stage for the next generation of diverse singers, Johnson and Major advise to set the table for all—two forks, two spoons, and not leaving out a piece of silverware for Black singers. If given the same number of utensils, it only comes down to how you use them, they say.

“Be fearless,” Johnson says. “Fear is a big thing that stops a lot of people, but don’t give into that fear. Know your languages. Know your craft. Know the ins and outs of the industry.

“Always be a student and be willing to learn and try new things. And for opera companies, give these singers the same amount of patience and risk that you would give to any other singer.”

“Opera is seen as a high art,” Major adds. “When you look at the European presence of opera, it’s presented as gowns and tuxes in the lower level of the theater—and American society has made the art form untouchable with high ticket prices.

“But when you look all the way up to the top, that’s where the artists live, with the common folk. Those are our people, up in the nosebleeds. Don’t be confined by your uniqueness—your body or your skin color. I like to say that I am uniquely and distinctly Brian Major. You have to be who you are.”