One of the most transforming experiences a woman can undergo is pregnancy. As women, we might wonder what it feels like to be pregnant? What will our baby be like? As singers, the layers of questions become thicker:

During my doctoral studies I devote my research to the neglected study of physical, emotional and career impacts of pregnancy for the classical singer. Since then I have surveyed 444 classical singer moms and moms-to-be from around the world, as well as conducted hours of in-depth interviews. My findings are not a guarantee or prediction of the experience of pregnancy for everyone, but I hope they can shed light on what the women I studied experienced.

Physical Symptoms of Pregnancy for the Classical Singer

My survey asked women their experience on a wide range of physical changes during various trimesters. Every participant experienced one or more symptoms, with the most common being:

In the first trimester, 50% of women experienced little or no physical changes that impacted their singing.

The second trimester seemed to be the least physically challenging, though more than half noticed a significant increase in appetite. 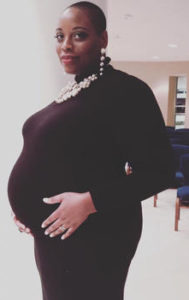 The third trimester offered new challenges as breath capacity decreased with the growth of the fetus: 93% of women surveyed had difficulty achieving depth in inhalation during this time. One survey participant shared her experience this way:

“First trimester, I was exhausted. I never got morning sickness, but my fatigue was severe. Second trimester, I felt unstoppable. If anything, pregnancy gave me energy, strength, and command of my instrument in ways I’d not achieved. Everything just flowed–breath, musculature, and tone aligned seamlessly. Third trimester, there was no room for my lungs anymore, so my capacity for technical execution diminished. I had to breathe more frequently, and the results were not my prettiest, but I never had to give up on performing.”

Although many women shared the struggles they had with the physical symptoms of pregnancy, most women continued to perform while pregnant with some performing up to 12-13 times during their final trimester! 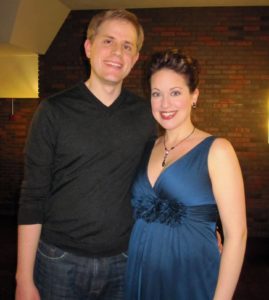 Nausea was an important topic among survey respondents and was one of the most common physical ailments, (76% in the first trimester), although this decreased to 19% and 9% in the 2nd and 3rd trimesters.

One survey respondent described her experience with nausea and vomiting during a staged performance:

“I had to ensure that there were bags strategically placed so that if I needed to throw up I was covered. Thank God for kind dressers!!!”

Another participant felt that singing exacerbated her nausea:

“During the first trimester my morning sickness caused my gag reflex to become stronger and opening my throat, particularly in the lower register, made me gag. I couldn’t sing below a middle C which was normally my happy place.”

Luckily, instances of nausea and vomiting decreased below 10% by the third trimester.

Pregnancy as a positive factor for singers

Despite the various physical challenges of pregnancy, women are singing while pregnant and succeeding! Although the third trimester had the most impact on women’s ease of singing, only 39% surveyed felt the physical changes related to pregnancy made singing difficult for them during this time.

In the second trimester, 37.5% of women said the physical changes benefited them. One woman wrote, “Being pregnant has been the best thing for my heart, voice, ambition, and priorities.”

My mission is to share the stories and experiences of women to normalize performing while pregnant. I highlight the vocal knowledge women gain during pregnancy and encourage a conversation about how pregnancy impacts classical singers. 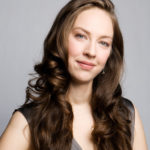 Dr. Catherine Gardner is an assistant professor at East Carolina University. She sings, teaches and conducts research out of Greenville, NC where she lives with her husband Mark and her four-year-old daughter. To read more about her research, visit www.singingfortwo.com