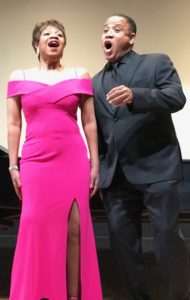 CS Music is always looking for ways singers can perform in a variety of venues. One such experience took place to a sold-out audience June 2, 2019 at Bruno Walter Hall at Lincoln Center. George Shirley, the  eighty-five-year-old Metropolitan Opera tenor, who recently graced CS Music’s International Vocal Competition and Convention, also served as the master of ceremonies. When he walked on stage to introduce the event he received a spontaneous standing ovation. There was even the incognito appearance of internationally renowned soprano, Kathleen Battle. Dr. Christopher Brooks, from Richmond, Virginia tells us more about this great event.

The late great African American tenor, Roland Hayes spent much of his life championing African American spirituals. In the early part of his career, he attempted to discover the source and uniqueness of the elusive “black voice.”

On Sunday afternoon, June 2, (one day before Hayes’ 132nd birthday) in the Bruno Walter auditorium at Lincoln Center, Hayes would have gotten his spiritual cup filled to the brim.

Even with an afternoon of many high points, there were still performances which enlivened the passionately appreciative audience to respond with spontaneous crescendos of applause and cheers. Chauncey Packer’s clear tenor voice caused a minor uproar among the audience in his delivery of Roland Carter’s “Freedom.” His last utterance of “. . . goin’ home to be free,” was sung with such conviction, it was as if he were saying, “I am ready to die!” nobly.

Another standout performance among the men was operatic bass Kevin Thompson’s performance of McLin’s “Great Day” which captured the performers and the audience. The exceptional richness and penetrating resonance of his voice were so captivating, it would come as no surprise if the Metropolitan Opera recruited him immediately at the close of the concert.

The Hairston quodlibet arrangement of, “This little Light of Mine,” “Woke Up this Morning with My Mind,” and “Wade in the Water” sung by baritones Sims, Kenneth Overton, and Thompson was one of the many crowd pleasers in Part III of the concert. Sims’ lyric sound contrasted and blended exceptionally well with the more robust and penetrating sounds of Thompson and Overton.

Among the women, there was an equal number of truly outstanding and memorable moments. Soprano Alison Buchanan’s performance of “Wait ‘til I Put on My Crown” superbly served as a prelude for the truly outstanding music that followed.  The blend of chest and head voice in soprano Hope Briggs’ rendition of “Is there Anybody Here who Loves My Jesus,” emotionally captivated many in the audience who responded with visible gestures and grimaces of utter delight. The spiritual was nothing less than spell bounding with her brilliantly delivered high B flat.

The Louisiana French Creole duet, “Gue Gue, Solangaie,” was executed by sopranos Louise Toppin and Marquita Lister with an artistic quality, clarity, and treatment that elicited tremendous audience appeal and appreciation. The rich contralto sound of Lucia Bradford’s lower register was magnificent in her rendition of “The Angels Done Bow’d Down.”

As producer of, and singer in the concert, Robert Sims did some of his best singing in his finale, “My Good Lord’s Done Been Here.”Not to be forgotten was the superlative artistry of accompanists Byron Burford-Phearse, Joseph Joubert, and Paul Hamilton. Each of them is clearly a seasoned musician with exceptional mastery of the pianoforte and a gift for accompanying singers.

As the director of the program, Fr. Ken Baker had the singers and accompanists in lock step precision. When one performance concluded, the next vocalist and pianist took their position at the keyboard.

The Masters of the Spirituals concert was a transformative experience which left the audience floating on cloud nine. This was a concert Roland Hayes would have celebrated as a crowning achievement of his life’s work.

Dr. Christopher Brooks is the author of biographies on Shirley Verrett as well as Roland Hayes. He is a professor at Virginia Commonwealth University.