Voices and body types come in all varieties. Because of this, we must be careful to not classify a voice based on physical characteristics. 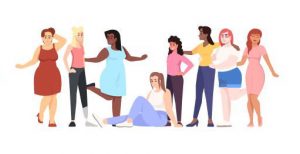 he image of the fat lady with horns is a pervasive one in our field, and this stereotype affects most of us in ways we don’t even realize.

I’m here to tell you that bodies and voices come in all shapes and sizes.

First and foremost, it is important to know that not all large people have large voices. Often, taller and/or heavier people are immediately “Fached” as heavier voice types than what they actually are.

But they’re just not “tapped into their support,” you say! They simply aren’t “singing on the breath,” you declare! They haven’t “found their core,” you insist! This may be true. It also may not.

While it is perhaps more likely that a dramatic soprano will be a tall and/or heavier woman as opposed to a petite, slender woman, this is not always the case. It is entirely possible for a soubrette soprano, a leggiero tenor, a high lyric mezzo, a lyric baritone, or a coloratura soprano voice to live in a bigger body. On the flip side, sometimes very large voices come in very small packages. These deep-rooted misconceptions do singers a disservice and can cause years of frustration and vocal mismanagement.

Singers regularly experience fat shaming, disguised as constructive feedback by industry gatekeepers. I was 280 pounds when I auditioned for grad school, and while I was there it was determined (correctly) that I was a full lyric soprano. I was also deemed graceless and cast only in comedic roles. I was told almost daily how imperative it was that I lose weight and was informed in my exit interview that I shouldn’t expect to be successful in my singing career. I then spent a month at an Italian summer program crying from the cruelty of the comments I received there.

When I lost a hundred pounds soon after grad school, I immediately started winning competitions, getting into good Young Artist Programs, and regularly landing roles. The industry suddenly insisted that I was a lyric coloratura. I choked my way through Adina and Norina and screamed the repeated high Cs in “Sempre libera.” My larynx was in my eyeballs.

My technique, which was once rather good, went south fast. I have never heard more conflicting opinions from industry professionals than I did over the four years that followed.

At the end of those four years, during my DMA program and with the help of a great teacher, I reclaimed my true voice and sang what I knew was right for me. I’ve learned that a shift in body mass does inevitably have some effect on the voice. I sang every single day through my weight loss, however, and the effect was quite mild. While my voice did pick up some extra brightness, or squillo, it really did maintain its full lyric quality.

This brings me to another common issue in Fach assignment: confusing dark with big and bright with light. Naturally dark voices can also be light voices. Naturally bright voices can be heavier voices.

Sometimes, the confusion arises because the singer has technical flaws that make their Fach unclear. For example, a soprano who utilizes tongue tension and depression to fabricate a darker sound can convince a listener that they are a full lyric. Conversely, a mezzo-soprano who sings with a high larynx and a spread embouchure might give the impression of being a higher or lighter voice.

Many times, the technique is not to blame but rather the listener’s ears. It takes experience and skill to determine what voice type a singer is and what type of repertoire they could or should be singing. Often singers are heard in small, dry spaces such as voice studios, soundproof rooms, classrooms, or blackbox theaters. This greatly affects the acoustic perception of the listener. Similarly, listening to a singer in an extremely live space such as a cathedral or a gymnasium can be misleading.

A singer who forces a forward placement may sound like they have a lot of ring in a small space, but a lack of back space and settled laryngeal position may prohibit the same singer from being heard over an orchestra in a large hall. A singer who maintains a free tongue and an open throat may sound less pointed in close proximity but easily soar over a thick orchestral texture in an opera house. For these reasons, it is important that voice teachers, coaches, conductors, and casting directors know what to listen for and be aware of how the specific space may be affecting their perception.

There is a constant pressure in our industry to fit one’s instrument into a “Fach box” when, in reality, Fach is fluid! Range exists, tessitura exists, and orchestral texture exists. The intersection of the three is complex; it doesn’t simply spit out an exact voice type.

Someone who sings both mezzo-soprano and soprano repertoire well cannot officially call themselves a Zwischenfach on their résumé. Why? It’s considered complicated or controversial. I’ve always found this to be a real shame.

I’m 38 now and am hired to sing everything from Bach, Handel, and Haydn to Beethoven, Dvořák, Strauss, Verdi, and Puccini. Those who think of me as an operatic full lyric soprano are often shocked to learn that I sing Baroque music regularly. Conversely, those who hear me sing the Baroque repertoire often assume I am a lighter voice simply because my voice can move quickly through fioritura passages and I have clear, concise trills. I’m Fach-fluid and I’m proud of it.

The following are true stories by professional singers. The names have been changed to protect the singers’ identities.

Breanne is in her early 30s. A tall, plus-sized woman, Breanne has worked hard over the years to try to create the big sound she knew was expected of her. Singing felt hard and left her tired. After several years, she was left to pick up the pieces of a voice that had simply stopped cooperating after all the pushing, squeezing, and fabrication of darkness.

Breanne completely reworked her technique and is now singing comfortably as a medium-sized lyric soprano. She is working to reclaim her high extension and may move toward lyric coloratura repertoire soon. Singing feels easy. Breanne is very concerned that her size is going to prevent her from being cast in any of the roles that are vocally right for her.

“When I was in college,” she says, “I had a light and bright voice. I was an average weight, and no one ever said anything about my weight versus voice size to me. When I was 24, I gained quite a bit of weight. I was almost immediately reclassified as a full lyric, and possibly a future spinto or dramatic soprano.

“When I entered grad school in my mid-20s, I got every sort of conflicting opinion possible. I had lost weight again and folks were baffled by my Fach. What I didn’t know then was that it didn’t matter if I could be put into a Fach—it mattered that I could sing well with a sustainable and healthy technique.

“Unfortunately, this confusion led me to an identity crisis both vocally and personally. When I left grad school, I was a worse singer than when I went in. I was overblowing air, I no longer had high notes, and I had no chest voice at all. I really wasn’t sure if I could continue singing.

“Over the years and with the help of two great teachers, I’ve become far more technically sound. I sing what feels good and meet my voice where it is at any given time. I feel less like I have to be a specific Fach. However, I am very aware that I am still judged primarily by my weight. This is undeniable based on comments in auditions, roles I have been offered or denied, and written feedback.

“I am the heaviest I have ever been, and people are constantly shocked when I don’t have an enormous voice. They expect something that just isn’t there and then assume I am simply not singing ‘on the voice’ or ‘connecting to the body.’ I’ve got good technique now, and I know those assumptions are false. I’m big and I’ve got a medium-sized voice. That’s just the way it is.”

Now in her 30s, Liana is a dramatic mezzo. Liana is constantly questioned about her repertoire and met with raised eyebrows when she hands an audition panel her repertoire sheet. Once they have heard her voice, they act as though they have seen a unicorn.

“I’m 5’4” (on a tall day), wear a size 4, and look rather young,” she says. “In my undergrad, there were suggestions that I might be a dramatic voice, though at the time it was difficult to tell whether it was to excuse the struggle I was having getting my registers to line up. I left school frustrated with my lack of overall progress and made the decision to leave opera as well.

“A few years later, I missed performing and got accepted into a reputable graduate program as a soprano, but quickly made the decision to return to mezzo-soprano rep. I had every intention of staying in lyric mezzo repertoire, but I was immediately cast in heavier rep there. This rep immediately felt more comfortable, so I started to work on arias that fell in the dramatic realm. The MONC competition was the first time I was told that the repertoire was too heavy for me. Unfortunately, it was far from the last time.

“Over the course of many years, I have been met with a lot of skepticism from people who have barely (or never) heard me. As I perform more and more roles in my actual (heavier) Fach, the external judgement subsides. However, I am left with a constant internal judgement: a worry of being heard (which leads to an impulse to push), wearing heels to every rehearsal to appear taller, and the constant need to apologize for my voice and downgrade my voice type.

“I’m working on getting past all of that so I can confidently focus on doing my job. I’m a dramatic mezzo and I’m little. Deal with it. Please?”

Fach assumption in all its forms puts singers at risk for emotional and mental trauma, body dysmorphia, and vocal damage. Many leave the industry, temporarily or permanently, because of it.

Singers: First, please do not feel you must purposefully change your body to match your voice or vice versa. I encourage you to sing what feels right, listen carefully to your teachers and mentors, and work with them to determine how best to market what you can offer.

Second, you have the power to spark industry change. Go ahead and put Zwischenfach at the top of your résumé. Bring that hard-earned repertoire list into your audition with pride, and let your singing speak for itself. Remove yourself from toxic industry relationships and situations whenever possible. Speak up for yourself.

Industry professionals: Let’s do singers an important service by listening with trained ears and an open mind. Let’s leave our preconceived notions at the door. Let’s evolve with the changing world and treat singers with the respect they deserve. 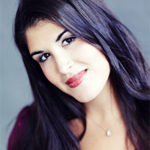 Dr. Dana Lynne Varga is a sought-after soprano, voice teacher and career coach, as well as the Founder and Artistic Director of MassOpera. She was the 2016 first place winner of the CS Competition; Emerging Professional division. Dana is currently on the Voice and Opera faculty of the Longy School of Music at Bard College in Cambridge, MA. She regularly presents vocal master classes as well as classes on business and entrepreneurship for singers all over the east coast. Please visit www.danavarga.com and www.theempoweredmusician.com.