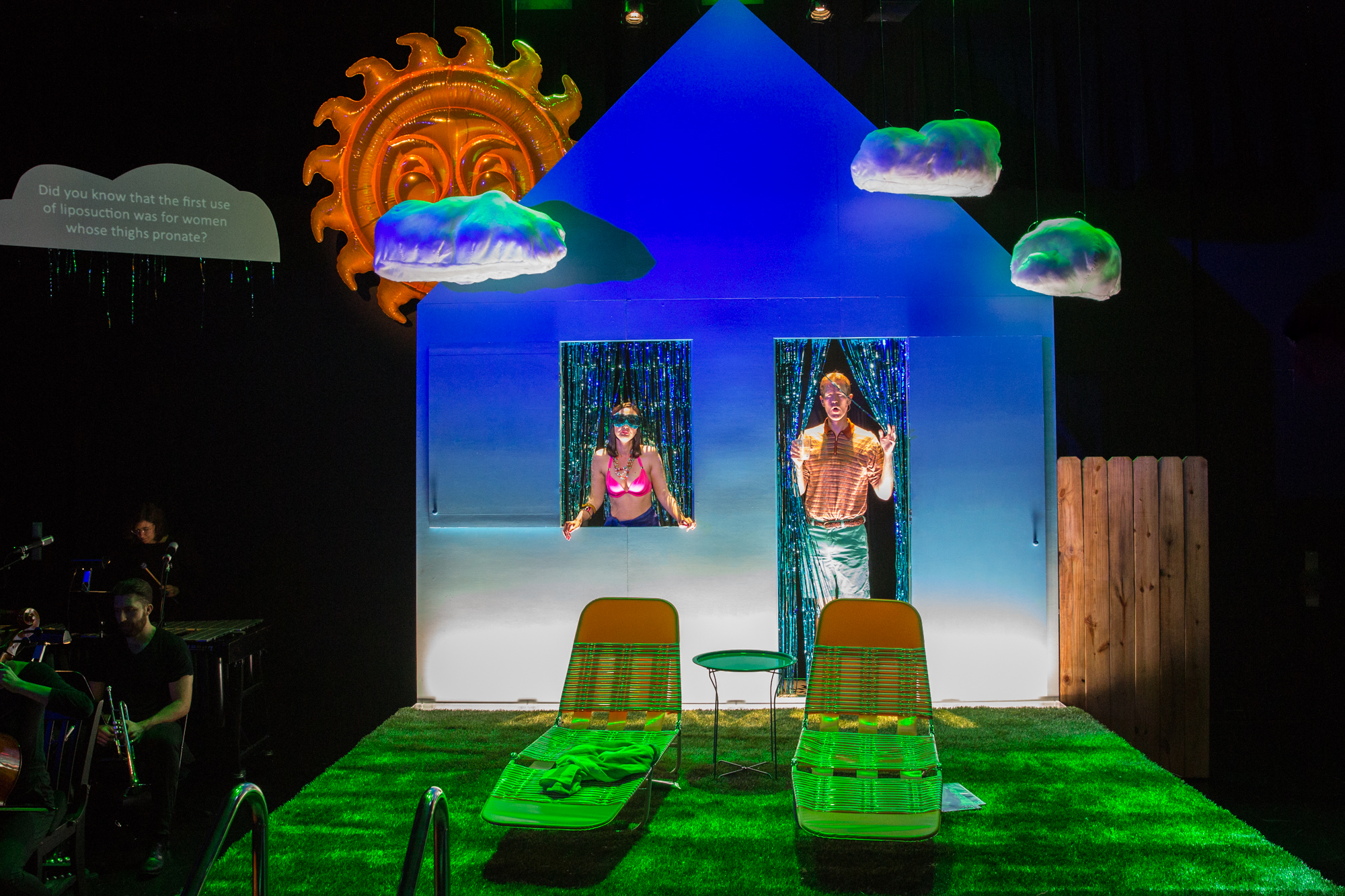 he pandemic brought about many innovations in opera, and Experiments in Opera (EiO) was especially poised to respond creatively. The company commissions new operas that are adventurous, funny, and collaborative at all levels of production. As a composer-driven company, they have commissioned over 75 new works in 10 years. Their recent podcast opera, Aqua Net & Funyuns—released in December and available to stream on Apple Podcasts, Spotify, and other services—features five operas, each with a different composer and librettist team.

According to Sankaram, “EiO produced an earlier podcast opera (Buick City, 1:00 AM with music and libretto by Jason Cady) and we had been talking about doing another one, but this time using the format of the writers’ room that we’d been exploring for our upcoming piece, Everything for Dawn. When it became clear that live performances wouldn’t resume any time soon (and after we made the decision to postpone the premiere of that piece), it just made sense to move the production timeline for Aqua Net & Funyuns forward. Not only because it would allow us to keep creating work, but because it would allow us to give people work in a time when things are very uncertain. It’s been important to us to really focus on building a community of artists, and this was one way to keep our community together.”

Siegel says, “One of the benefits of being a smaller, more flexible company is that we can change courses more easily.”

Cady adds, “Kamala and Aaron were interested in revisiting the podcast medium . . . of course the pandemic and shutdown brought that idea to the forefront since all of our live performances got cancelled. EiO has a long history of doing multi-artist shows and works. We do this for both practical reasons and artistic reasons. Since we had already done a podcast that strictly featured my work, we wanted to do a multi-artist work.

“Plus, when we started planning it, we weren’t sure how long the pandemic would last, so we wanted to make it as quick as possible. Producing a full-length opera by multiple artists was just more doable. However, fiction anthology series are problematic. There have been a few successful anthology TV shows like The Twilight Zone and Black Mirror, but that format is pretty rare for a reason.

“We didn’t want to make a series in which the audience would seek out episodes featuring certain artists and not listen to other episodes. Plus, we wanted a more unified work. So that led me to two ideas: first, the ‘Easter eggs’ that connect the different stories and, second, the ‘round robin’ way of alternating the different stories one act at a time. I put together the group of librettists for the writers’ room.

“We met once a week throughout July. I asked everyone to avoid current events in their stories. This was because the news was moving so fast that it was sometimes hard to tell what would feel relevant later on. Also, 2020—and, really, the last four years—have been so awful that I felt that people needed a little escapism.”

The logistics for creating this work were more in depth than typical performances or even the first podcast project. Cady wrote a style guide for the composers. “The instrumentalists and singers will record to a click track since we will not be able to assemble everyone together in a room,” Cady says. “So, it is better to write music that fits to a click track (flexible tempos and improvisation would be risky). We have a limited time to record the instruments and vocals for each opera, so compose with that time limit in mind.”

The writers’ room meetings met over video conferencing. “But I have to say I hate video conferencing,” Cady says. “Working together in person is much better, but obviously keeping everyone safe is most important.”

The recording studio, 2nd Story Sound in New York City, had requirements and safety protocols in place, including staggered calls, space between each singer for the studio to air out using air filters and fans, and reduced use of common spaces. Singers and the pianist recorded at the studio, while others recorded at home. Cady comments, “We had figured that that would work out OK for those four instrumentalists, but that it might be a problem for the pianist and some of the eight singers.”

Sankaram describes the complexity of this arrangement: “We decided that it would maximize our budget to have the instrumentalists record at home and bring the singers into the studio. This meant that we had to be mindful in our hiring—we had to use instrumentalists who not only were comfortable with new music but were comfortable with home recording and had decent enough recording setups. Jeff Cook had a call with each individual instrumentalist to talk them through the best option for their recording setup. Recording in this part of the process was done round-robin style: we created a schedule spreadsheet to track where each piece was in the process and what each instrumentalist should be working on getting the tracks ready for the singers.

“The safety protocols had to be factored into the production timeline from the very beginning, which meant that it was a different sort of schedule than we would have created for a normal recording. Despite the fact that these are all world premieres, the cast and band would never be able to rehearse together, so the process of creating and tracking the pieces had to be mapped out in detail to allow the music to still be realized at a high level. We were very happy to work with our music director, Dmitry Glivinskiy. While we couldn’t rehearse in person, we did have detailed preplanning sessions with the cast, band, Dmitry, and our sound engineer Jeff Cook to discuss interpretation and any questions for the composers. We made the decision that everything would need to be recorded to click track to make the editing process easier.”

For the singers, this meant recording all their music in a session. That meant jumping from one opera to another—each singer sang multiple roles across the operas, an unusual process for many opera singers, but a useful skill for the future of our industry even beyond COVD-19.

Sankaram adds, “Because the singers couldn’t track together, this had to be done more like a voice-over session where we, as the producers, would give voice acting notes in addition to checking for musical accuracy. Obviously, this is a much different way of working than creating a live performance, but this format also allowed for explorations that aren’t often seen in opera, such as the heavy use of foley and sound design and the use of straight speech.” In fact, the finished project has more in common with a radio play than a traditional opera. Sound design and prerecorded material creates a unique palette for telling the stories.

This new medium for opera is exciting for the creators at Experiments in Opera. Siegel says, “It is always a challenge for opera audiences to adjust to new ways of engaging with opera. The art form has some inherent conservative tendencies. But we hope we are challenging listeners of new music and of new opera to recalibrate their expectations and make some space for storytelling and music combinations that look and feel different.”

Sankaram adds, “I think it’s interesting that podcasts are a completely aural experience, so it seems like a great match for opera since you must rely on the music and sound for the storytelling. I think that it’s often a crutch for us to rely on compelling visual design in modern work. And that sometimes this can actually serve as cover for a piece that doesn’t completely stand on its own. In returning the emphasis to the aural, we are forced to create stronger pieces.

“I also think there is something very democratizing about being able to access these pieces online. You don’t need to be able to travel to an opera house. You don’t even need to put on pants! You can listen from anywhere. And people everywhere are listening—our early data shows that we have listeners all over the world, and in significantly higher numbers.”

Cady concurs, “Making a podcast opera is good for accessibility for three reasons: first, it helps to expand EiO’s audience beyond the New York area to both a national and international audience and, of course, people can listen to it any time, unlike live performance; second, it’s free, so there are no limitations—other than access to the Internet (I think it’s important that opera be for everyone, not only for the wealthy); and third, in addition to bringing in opera and experimental music fans, we hope to bring in audio fiction listeners.

“I think there will be great art made about the pandemic and the Trump regime in the future. And it will be necessary for all of us to process this terrible time, but I thought right now was too soon. Also, I actually think there is too much nonfiction in opera nowadays. The success of operas like Nixon in China has led many to think that opera has to be about current events or historic subjects. I am committed to bringing more fiction into opera.”

Creating work that takes people out of the moment and into another story, and especially stories that include comedy, is necessary in a difficult time. Find Aqua Net & Funyuns wherever you listen to podcasts, and enjoy these modern pieces, complete with a scavenger hunt for “Easter eggs.” Experiments in Opera remains committed to opera that is new, vibrant, and fun.

Another One Bites, libretto and music by Jason Cady

Ships that Pass, libretto by Cara Ehlenfeldt and music by Aaron Siegel

The Understudy, libretto by Jason Cady and Cara Ehlenfeldt and music by Kamala Sankaram

“Experiments in Opera is reconfiguring not only the way operas are created, but the manner in which artists and audiences interact with the art form.”—San Francisco Classical Voice

“Experiments in Opera (EiO) is the company that gives most hope for the future of the opera form. They are fleet, inclusive, and steeped in the history of the opera. Most importantly, they have extended the camp storytelling, which characterizes the form.”—Berkshire Fine Arts

Joanie Brittingham is a soprano and writer living in New York City. She can be reached at joaniebrittingham@gmail.com. Visit her blog, Cure for the Common Crazy, at commoncrazy.blogspot.com or see her column, Big Apple Sauce, on the arts scene of New York, at the website JuicyHeads.com.