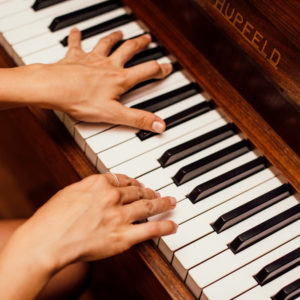 You should know what to expect from and how to communicate with an accompanist so that you can feel confident and calm during an audition.

The first thing that will help you help your accompanist is getting your sheet music from the right source. Not all copies of musical theatre songs are created equally. The best place to get your music is from the piano conductor score. This is the orchestral score reduced for piano with the vocal lines included. A university library is a good place to start looking for a copy of the piano conductor score.

Music printed in the vocal selections of a show or found on websites that sell sheet music have often been simplified so the accompaniment may be a little sparse, with the right hand of the piano doubling the voice part. The key may also have been altered to a key with fewer accidentals, presumably making it easier to play but not necessarily easier to sing. The simplification and alteration of published musical theatre music is more common in the older publications. More contemporary shows tend to be published in the show key with fewer simplifications. It is always a good idea, however, to double check it against a copy of the piano conductor score.

Many of the piano conductor scores of the older shows are still in a handwritten script. Music theatre pianists are generally used to this. If it is a poor copy, however, it is even more difficult to read. You may also consider looking to see if the song you want to sing has been included in an anthology. There are several anthology publications that are in the show key with the accompaniment from the piano conductor score.

Once you have the copy of the song you want to sing, there are a few varied opinions on what to do with it. Traditionally, it gets put in a binder in some format that is playable. This has included putting the sheet music in plastic sheet protectors as double-sided or single-sided copies that have been taped back to back.

I polled industry professionals including Sarah Brett England, faculty member at Montclair State University, music director, accompanist, and arranger in New York City; Beth Burrier, associate professor at Baldwin Wallace University and associate artistic director at College Light Opera Company; and Roberto Sinha, music director for the national tour of Hamilton about what they prefer when playing for auditions, and this is what they said.

How do you feel about playing from plastic sheet protectors?

Sarah Brett England: As long as they’re glare-free, I love them. Allows for easier page turns, avoids staples or taped pages that might not be conducive to turning, and also allows the actor to adjust the cut. [For example,] if you have single-sided pages, you can move the pages in the sheet protectors more easily than if they’re hole punched in the binder.

Beth Burrier: I hate them. They are slippery, they glare, they make books heavy.

Roberto Sinha: I don’t have a strong hatred of them like others, but I will say that there is the possibility of glare and/or some page turn issues, so use them at your own risk. Even the anti-glare kind have lighting issues. I think double-sided printing or single-sided back to back and taped (never stapled!) is my recommendation.

How do you feel about playing from an iPad/tablet?

SBE: I play from an iPad the majority of the time for rehearsals, performances, classes, and lessons. However, for auditions, still plan to bring your music in a binder because a small iPad is hard to read, different programs handle how the pages are turned (e.g., where to touch on the screen and if it’s a tap or a swipe, which can be an added coordination while sight-reading), the iPad may freeze, and I don’t want to be held responsible if something I do . . . causes the iPad to fall to the ground.

BB: iPads are fine if they are 12.9-inch size [and] running forScore, which is the industry standard software.

RS: For auditions, don’t bring your iPad—always a binder.

How do you feel about playing from a lead sheet?

SBE: I’m generally fine with it, if the actor can give a sense of the groove they want. If not or they just say, “medium swing tempo,” they’re going to end up with however I interpret the page, which may not be what they want. However, I always suggest bringing in the arrangement you want played, as you’re otherwise leaving things to chance.

BB: Fine, but that’s a terrible chance for a singer to take in an audition.

RS: I don’t mind, but some people might. It’s always a risk bringing one into an audition. It’s especially hard if the pianist doesn’t know the song, as lead sheets really don’t give enough information to go on.

What do you want singers to know about how to indicate tempo to you?

RS: If your song begins with long-held notes, don’t use that section to demonstrate tempo. It’s not helpful, especially with pop/rock songs. Find the chorus or the hook and use that. It’s always the clearest part to demonstrate, and the likelihood that I will recognize the tune is exponentially higher. I might not remember the verse or the bridge from your particular selection, but I should know the hook!

BB: Sing your lyric, not the piano part. Sing the chorus or some part where you have more notes than I do. If I don’t ask you for a tempo, it’s because I know your song—and if my tempo is slightly different than yours, I will adjust to you. Please listen to my questions rather than jumping into a prepared speech.

SBE: You don’t necessarily have to give me the tempo from the beginning of your cut. Consider either giving it from the chorus (where it’s easier to lock into) or from the fastest rhythm you have to sing. You don’t need to sing when you’re giving the tempo. However, please speak the lyrics. It’s hard to hear rhythms (especially of repeated notes) with humming.

When giving the tempo, consider tapping on your body, chest, or arm. The physicalization will help lock you in as well as give me something visual to see. Clapping and snapping can often be interpreted negatively, even if that’s not the intent. And, yes, a tempo can be given in as little as four beats if you’re clear with what you’re doing!

The accompanist at an audition is there to help you feel successful. You can help them help you by having an organized audition book, listening to their questions, and communicating to them clearly what they need to know about your interpretation of your pieces. Remember to treat them kindly and with respect, because they may also be giving input to those sitting behind the table. It would make casting a difficult job indeed if the pianist playing the audition could say that you were generous, articulate, and a great musician.