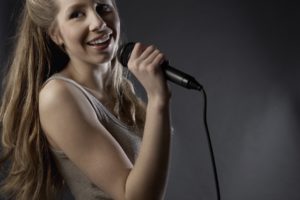 Without any dispute, hands down, the question that I get asked most as a voice teacher is “What should I sing at my audition?” I reached out to a few music directors that sit in on hundreds of auditions every year to help me give the answer to that burning question.

Sarah Brett England, a faculty member at Montclair State University and a music director, accompanist, and arranger in New York City, gives this answer: “Find material that suits you type-wise, vocally, that you can act, that shows your strength and personality, and that you connect with.”

Beth Burrier, an associate professor at Baldwin Wallace University and the associate artistic director at College Light Opera Company, answers the question this way: “Sing something you love, not something your teacher loves. And you should be able to put into words what it is you love about the song. Sing something you can sing every day, even when you are sick. We do not need to hear the loudest highest notes you can sing. We can figure that out—honestly, we can—we are trained professionals, we hear hundreds of singers every year. We need to see a human being who is connected to the text they are singing and understands how the music functions to support the story of the text.”

Roberto Sinha, currently the music director for the national tour of Hamilton, says, “Sing whatever you feel good singing. Feeling confident, sure, and prepared allows you to make strong, personal, and intelligent choices in your performance, and that’s what we want to see in an audition room.”

So, the most important thing you need to know about deciding what to sing for an audition is that there is no perfect song that is going to get you cast because it is not about the song. It’s about you! What you do with the song you choose is far more important than the song itself.

For anyone going into an audition it is important to know what is being asked for in the audition notice. Read the instructions carefully so you can show up prepared to sing what the directors are looking for. Most audition notices are asking for something in the style of the show, which means that casting directors want to know that you can, for example, sing the legato line required in a golden age show or that you know how to stylize pop/rock music. They also want to see that you can present the same dramatic style. So, generally, you are looking for songs not from the show you are auditioning for but songs with a very similar musical and dramatic feel.

Before going to the audition, get as much information as you can about the show. Listen to the album and read the script if possible. At the very least, read the synopsis.

You should know which character you type into and then learn as much as you can about that character. Know all the songs that this character sings. Understand their story and their emotional journey throughout the show. All this work will pay big dividends if you get a callback because you will already be familiar with any material you may be asked to perform from the show.

Once you have learned all you can about the show and the character, then take a look in your audition book to see what you already know that is most like the musical style of the show and the story of the character you most relate to. This is with the assumption that the music you have in your book is age appropriate, music you love to sing, and something you can sing even when sick.

If you don’t already have a song that fits these criteria, then look for songs from shows written in the same time period as the show you are auditioning for. Find out what other shows opened that year and what shows opened the few years before and after. This generally helps you find something in the same musical and dramatic style of the show, but not always. Sometimes a contemporary show is written in a more golden age style. Shows like Thoroughly Modern Millie, The Producers, and 42nd Street, although written and produced after 1960, are not technically contemporary musical theatre because they sound more like golden age shows than contemporary shows.

When you have found a show or shows that are in the same style, then do the same homework to learn about these shows and their characters, looking for something that is age appropriate, that you love, and that you can add to your book.

If you are auditioning for more than one show, like the theater’s whole season, then you should learn about each show on the season so that you understand which shows you are most likely to be cast in and choose your audition repertoire based on the characters you type into.

Auditioning for a pop/rock musical may feel a little different than auditioning for traditional legitimate musical theatre (both golden age and contemporary). Again, read the audition notice carefully and note if the auditioners are asking for “off-the-radio pop/rock.” This means that they do not want to hear pop/rock songs that are in other musicals.

This gets tricky because there are musicals that are filled with off-the-radio pop/rock. So avoid choosing music from the jukebox musicals like Jersey Boys, Beautiful: The Carole King Musical, Mamma Mia!, Rock of Ages, The Cher Show, etc. Also, avoid singing music from musicals that were written by pop/rock artists like Elton John’s Aida or Cyndi Lauper’s Kinky Boots.

Find something that is truly off the radio and has not been adapted for or featured in a Broadway show. Also, find something that is musically in the style of the show. The pop/rock of the 1950s sounds very different than the pop/rock of the 1980s. Some directors and voice teachers feel that you should have at least one off-the-radio pop/rock tune for every decade beginning with the 1950s through the 2010s. Others feel that you just need a few contrasting tempi and time periods.

If the audition notice does not specify “off the radio” then it is safe to assume that you can choose to sing repertoire that is off the radio or from the jukebox musicals and other pop/rock musicals.

Lastly, no matter what age you are choosing repertoire from, it is best to choose repertoire that has a strong acting objective where the character’s need is present and immediate. Avoid story songs that retell the character’s past experiences. This will help you as an actor and gives you, and the audience, more to relate to.

In summary, the most important preparation for any musical theatre audition is knowing who you are and what your storytelling skills are. Then you can confidently walk into the room and use these skills and your creativity to tell a story about human experience. If the story you are telling is something you understand and connect to, then casting directors will see you, and that is the most beautiful story of all. Regardless of whether you are cast or not, you can count that as a truly successful audition because sooner rather than later you, not what you sing, will book it.