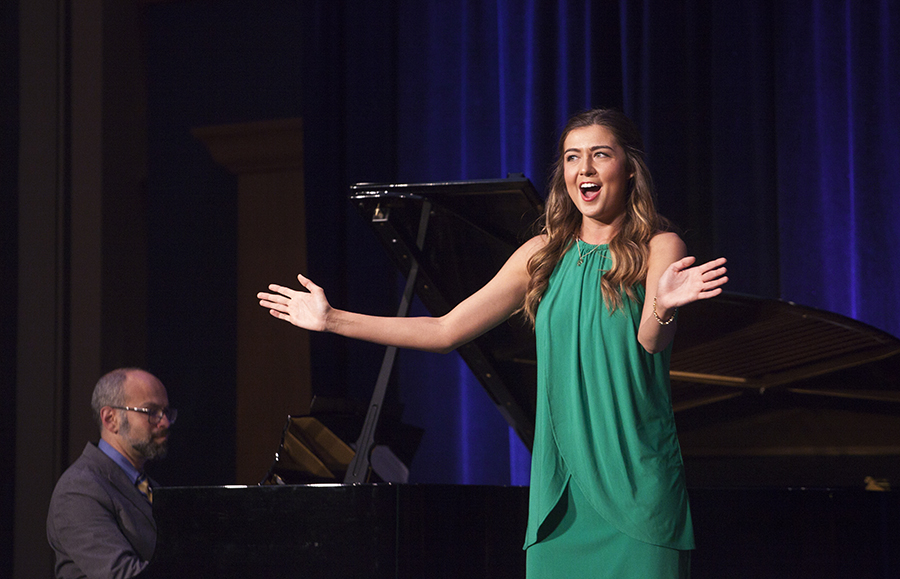 Navigating the logistics of musical theatre auditions may seem confusing, but with a few tips you’ll quickly be on your way. The most important thing is to just do it. I have observed that no matter the training and background, those who are most successful are those who relentlessly attend auditions. So here are some things to know before you go.

Headshots should be in color, and it is best if the shot is vertically oriented. Also, you should be simply dressed in solid colors—no need to pull out your gowns and suits for these headshots. Women should wear very little jewelry and just everyday makeup. For men, it is a good idea to have both a bearded or scruffy shot and a clean-shaven shot.

You may want a couple of different poses or looks. Often, musical theatre actors have two main poses: a serious look and a commercial look, which has a smile showing teeth. Also, no need for full-body shots; from waist up is best.

Your headshot should be an 8”x10” print with a white border around the edges and your professional name printed in a larger font at the bottom.

List your performance history first, and list it in order of importance (i.e. professional venues and/or well known directors first). You want to organize the information so that it is easy to see the venue and the directors and choreographers you have worked with. You may also include your training—and don’t forget to include any special skills like instruments you play, languages you speak, tumbling, or any other little tricks you may be able to do.

Your audition book can be divided into several categories: golden age (pre-1965) up-tempo, golden age ballad, contemporary up-tempo, contemporary ballad, pop/rock (ideally a couple of songs from different decades, tempi, and styles). You may also want to include an operetta/light opera category that may include selections from composers like Gilbert and Sullivan, Sigmund Romberg, Franz Lehár, and other light opera composers.

For all the songs in your book, you should be prepared with the whole song, a 32-bar cut (under 90 seconds), a 16-bar cut (under a minute), and an 8-bar cut. In each of your cuts, you want to find some arc to the storytelling that begins with a bit of rising action before arriving at the climax and highest notes. Remember that in the musical theatre world we value truthful and engaging storytelling over flawless technique.

But regardless of what show you are auditioning for, you should wear something comfortable and flattering that doesn’t need to be constantly pulled up or pulled down after the slightest movement. If possible, find something to distinguish yourself. Ideally, you want to be remembered for your performance, but it may also help to be remembered as the one in the yellow dress or the monkey tie.

You may also want to bring dance clothes and shoes with you in case you are asked to stay to do a dance or movement call. I have seen musical theatre performers show up to an audition with a small roller suitcase that is filled with several audition outfits, dance clothes, shoes, makeup, and curling irons so they are ready for any kind of audition and can get ready while waiting to be seen.

Now you are ready to show up and be seen. An open call or non-equity audition is not affiliated with any union. Sign-up for the audition usually begins an hour before the posted start time, and you are signed up in the order that you arrive for the audition. Arrive at these auditions as early as you can.

If the monitor does not honor the unofficial list, then listen carefully to their instructions and how they are going to organize the audition. No matter what happens with an unofficial or official list, plan on doing a lot of waiting at an open call. Bring food and things to do, because if the monitor calls your name and you are not there and you didn’t tell anyone you were going to use the restroom, you will be skipped and will miss your opportunity to audition or be placed at the end of the list when you do return. Also, because an open call is not associated with a union, there is no guarantee that you will be seen at all, but I think that most casting directors will do their best to see as many people as they can.

Occasionally at an audition, the casting director will do what is known as “typing out.” This means that they will ask people to stand in a line holding their headshot in front of them, and the casting director will choose people to sing, dance, or act based upon their look and physical type. This helps auditions move along faster, especially if they are only casting one or two roles.

The Actors’ Equity Association (AEA or just Equity) is the union for stage actors and stage managers. Members of the union have the privilege of signing up for auditions online a week before the scheduled audition date. Not all the slotted audition times can be filled online, however. Some are reserved for those that show up the day of the audition.

You do not have to be a member of the union to audition for a union-regulated audition or show; however, union members will be given preference at auditions and seen first. Non-union performers will be seen if the casting director is willing and there is time.

If you would like to audition for a union show, then the process is very similar to an open call. You should arrive early and sign up on the unofficial or the official list, depending on what time you arrive. If the casting director would like to see non-equity performers, then the monitor will slot you in throughout the day when there is available time. Note that union members may show up at anytime and claim any open spot.

Also note that there are some performers who have Equity Membership Candidate (EMC) status, meaning they have earned several points for working on union-regulated shows as non-union members, and once they have accumulated the designated number of points they can apply for membership. Those who have EMC points will be given preference over non-union performers if they arrive before the midpoint of the audition day. After the midpoint, their name will be added at the end of the non-union list.

The busy audition season begins in January and ends in April or May each year. This is when summer stock theaters are doing their casting and when many repertory theaters are casting their seasons. Most professional theaters hold auditions in New York City, although many regional theaters will also hold a local audition. If you are auditioning during the summer or autumn season in New York City, then you may find fewer audition opportunities available but may also find that there are fewer people attending auditions.

Again, my observation is that those who attend the most auditions work the most, and casting directors really do work to see as many people as they can in a day. Don’t worry about being turned away because a casting director has already seen you several times before but not cast you. Keep showing up and doing what you do.