Let’s clarify the vocabulary that is often used to describe and classify musical theatre singing. There are three main words that get thrown around all the time: belt, mix, and legit. These three little words have many meanings. They can be references to the vocal function or to a genre of music or stylization.

It is important to understand the various ways you may hear people use these words so that you understand what you should be doing with your voice. This knowledge also helps alleviate any fear or worry that may be associated with some of these words. You should feel confident and safe that you can make all these sounds with your voice as you look to cross over or cross train. Note that the purpose of this article is not to teach you the vocal technique associated with these terms but to help clarify what they mean in their many different contexts.

“Belt” is the word that is probably the scariest to those who are unfamiliar with it. But there is no need to be afraid of belting. Let’s just clarify the many ways this word is used.

Sometimes belt gets used in reference to volume. You may hear someone say, “They were really belting it out.” It usually gets used this way by non-singers, and they are simply referring to the volume or intensity of the sound. But do not discount that you may be working with an artistic director, choreographer, or music director who is not a singer. 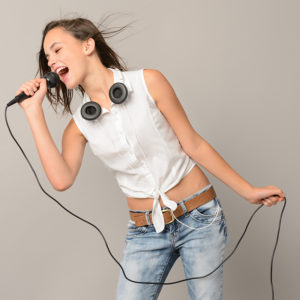 Belt can also refer to a type of song. You may hear someone say, “I need a belt song for my audition.” This becomes a very broad description because a belt song could be up tempo or a ballad, golden age or contemporary, dramatic or comedic. A belt song is referring to the type of sound or, you could say, function of the voice in this song—meaning they want a sound that is heavy and wide rather than light and lofted.

If you get into a room of musical theatre voice teachers, then belt refers to a function of the voice. Some will have differing definitions of what this function is. Some will advocate that it is taking the chest voice up the scale past the passaggio as far as you can. Others will advocate that all good singing is a mix and will claim that belting is a chest-dominant mix.

In order to clarify these different techniques, other words have been created—like speech mix, calling, head belt, chest belt, speech-level singing, or using thick folds—and yet these terms will all fall under a broad umbrella that is usually just called belt. I think I can safely say that all these terms agree that, especially in the female voice, belt is a chest-oriented sound that is wider and brighter than what we look for in the classical voice world. As a music theatre voice teacher, I advocate that when seeking someone to help you learn how to belt, you shop around and find a teacher that advocates for some kind of chest-dominant mix or call that feels easy, can be done loudly or quietly, and makes your voice feel unified rather than divided into two incompatible parts.

In the musical theatre singer world, there is a lot of talk focused around “mix” and “belt.” Singers are trying to know when to belt and when to mix and how to distinguish the functional differences of the two. You may hear someone say something like, “I really wanted her to belt at the climax, but she just mixed the whole thing,” or “I don’t belt, I mix.” When mix is used in juxtaposition to belt, the listener is probably either advocating for, or complaining about, a shift to a head-dominant color. The sounds that are generally associated with this reference to mix are gentler and more head voice dominant than belt sounds and can be found in everything from golden age to contemporary music theatre and pop/rock.

It is imperative to know that leading musical theatre voice teachers advocate that all belting is a mix; however, not all mixing is a belt. There is a chest-dominant mix, which is the essential component to a healthy, flexible, expressive belt. The good news in clarifying our vocabulary is that this chest-dominant mix/belt is rarely referred to as just mix.

Mix is often associated with the ingénue and other young and innocent characters, but mix is also used in very intimate and vulnerable moments for any type of character. Also, most contemporary ballads in any style will start in a mix and progress to a belt as the song climaxes. As a style, mix is often a reference to the classic Disney princesses. You may hear the term “princess mix,” which can also refer to the voice function as well as the style.

Examples of female singers singing in a mix are Lea Salonga as the voices of Mulan and Jasmine, Jodi Bensen as Ariel, Olivia Newton-John, Joni Mitchell, Laura Osnes, Sierra Boggess, and Phillipa Soo.

Mix is a term associated with both male and female voices and functionally the coordination is the same, but the resulting sounds are slightly different. The industry calls for men to sing in something chest dominant most of the time, but they need to borrow physical actions from the falsetto in order to line up the voice. Moving between these sounds seamlessly is part of the act of mixing. Women can sing in a head-dominant sound more often.

Mix, for a man, is generally referred to when wanting small, intimate, and vulnerable sounds at the secondo passaggio and above. For the male singer, you may feel you need to lighten and brighten the middle voice, but may not feel you are using a mix until you begin to sing in the secondo passaggio. This sound is very light and spacious like the falsetto but has more core than the falsetto and not the weight of the chest voice. And, again, for most ballads usually a singer starts in a mix and progresses to a belt as the song climaxes.

The term “legit” refers to sounds that are similar to and influenced by classical technique and aesthetic. For women, this often means a lofty, head-dominant sound. For men, this means a more robust, round sound that is very vowel focused. You may hear someone say, “We are looking for a more legit sound for this role.”

This directive often implies someone wants a more classically oriented legato line with taller vowels and vibrato on most notes. This term will be used to describe the sounds from operetta to golden age leading ladies and men to certain pop/rock sounds in contemporary musical theatre. It is important to note that to the classically trained singer’s ear the golden age soprano is singing in a mix, but when people speak of mix, they are not referring to this sound—this would be considered legit rather than mix. It should also be noted that a more contemporary soprano-dominant mix is also often referred to as legit.

You may hear it called a legit mix or just legit, but it does not sound classical or like golden age legit. And just to make matters more confusing, you may also hear someone refer to sounds like the previously mentioned princess mix as legit. To those who don’t spend time listening to classical music, the Disney princess may seem very classical to them. And to many who have spent little time in the classical world, legit and classical are essentially synonymous.

You may also hear someone say something like, “Les Misérables is a legit musical.” This may surprise you because you may hear a lot of belting happening in that show. In this instance, legit refers to music theatre music that is not influenced by pop/rock. It follows a more traditional format and the score is written for traditional acoustic instruments and singers.

Having some background information about these three little words should help you navigate the very many ways that you will hear them used. You will then be able to give the sounds that artistic, music, and casting directors may be looking for as you cross over into the musical theatre world.