Performance anxiety. It sounds so serious. While most performers would admit to feeling nerves before going on stage, or perhaps even a degree of “stage fright,” the words “performance anxiety” somehow make the experience seem like a bigger deal. 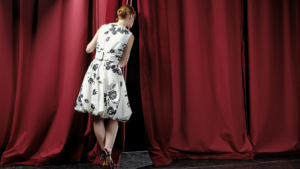 In the same way that the phrase “shell shock” evolved to the more descriptive, if more clinical, diagnosis of “post-traumatic stress disorder,” performance anxiety is the current terminology used to describe the myriad of feelings (mild to severe) we all experience before we sing in front of an audience.

The sensations are familiar to anyone who has been on stage—shaky knees, dry mouth, sweaty palms, increased heart rate—and we have all had to work our way through these symptoms in order to complete a successful performance. But for some, the experience of performance anxiety is significantly more intense and can even have a debilitating effect.

That is the personal story Sharon L. Stohrer brings to her recent book, The Performer’s Companion: A Guide to Conquering Performance Anxiety. She recalls how performing would induce headaches and hyperventilation. Even the prospect of performing would give her a sense of doom or cause her to have difficulty sleeping. She called the entire experience “torment.”

As if the impacts of performance anxiety are not enough on their own, many singers experience a negative stigma around the topic as well. They feel ashamed or embarrassed by their anxiety, believing there is something incurably wrong with them. Stohrer refers to this as the “deep, dark secret.” As a result, singers can avoid performance opportunities or, in some cases, give up singing entirely.

I was dismayed to discover my own prejudice on the topic on a morning train ride to work. While reading Stohrer’s book, I noticed that a fellow passenger seated across from me was eyeing the cover. Immediately, I found myself hiding the book from his gaze, lest he think that I had anything other than an academic interest in the subject. Sufficiently humbled, I had to wonder why I was afraid that someone might believe I experience performance anxiety—especially a complete stranger.

Stohrer points out in the book that multiple studies identify performance anxiety as the country’s number one fear. Why, then, the desire to hide the struggle or treat it as an unspoken taboo?

Of course, those with severe performance anxiety may need to make use of professional services like counseling or psychotherapy, as Stohrer did. The techniques she advocates in her book, however, are the same practices that, along with counseling, allowed her to work through her own anxieties. Now, by offering frequent lectures and workshops on the topic, she has seen these same approaches bring positive results to numerous others.

In an e-mail correspondence, Stohrer expounded on many of the ideas she addresses in her book.

Performance anxiety is certainly being talked about a lot more now than in the past. Do you think that’s because more people are experiencing it, or is it just that we’re getting better at defining what it is?

I would say yes to both. I certainly experienced performance anxiety in college (soon after the Earth cooled) long before there were books and workshops available, and I believe in the past it prevented many people from performing at all.

At the same time, I think our culture’s frenzied pace makes finding one’s inner calm and strength more and more challenging. I teach at a conservatory and I am convinced that many of my students have no idea how uncentered and stressed they are in daily life. That stress only increases under the demands of performing.

Is it fair to say that almost every performer experiences some form of performance anxiety?

I would say yes, as long as you subscribe to the notion that performance anxiety and excitement really are flip sides of the same coin. The difference between those who learn to manage and channel the nerves into the “spark” of an exciting performance and those who are undone by the adrenaline is the crux of my book. Preparation, mental strategies, and self-care will make the difference.

Your approach to managing performance anxiety at first may seem counterintuitive. You don’t advocate eliminating the symptoms of nerves but, instead, acknowledging them, embracing them, and learning how to perform alongside of them. How did you come to this approach?

I stole it! Seriously, most successful performance anxiety authors suggest similar approaches. In the very first book I read, A Soprano on Her Head, Eloise Ristad suggests trying to make any symptoms stronger. Dry mouth? Imagine you are swabbing it with cotton! Shaky knees? Try to make them shake more! I experimented with this in my own performing and found that she was absolutely right. Symptoms only get worse when we focus on them and worry about them. By allowing them to be, even embracing them, we get back to the business at hand—which is to focus on our breath, our bodies, and our ideal sound and to tell stories and move audiences. In performance, what we focus on increases!

It may sound a bit harsh, but in his book, Audition Success, Don Greene suggests to a mezzo whose heart raced when she auditioned that she practice walking up the five flights to her New York apartment, walk in the door, and begin her audition aria. She soon learned that a racing heart was not to be feared and that she could, indeed, perform very well.

You are up front in saying that you are not a psychologist or a licensed therapist. Rather, you are someone who has personal experience in dealing with your own performance anxiety as well as helping your students with similar experiences. Do you feel this gives you a unique perspective in writing this book?

Absolutely. I have read many books on the subject, and a lot of them are devoted to explaining psychologically/scientifically the phenomenon of stage fright. I think that was necessary some 20 or 30 years ago—but performance anxiety today is more fully understood and our energies are better spent on helping folks deal with it.

When I work with my own students or do a private PA coaching or give a workshop, I can see the beginnings of trust and hope on participants’ faces when I reveal my own journey—how at one time I had symptoms so severe they were identical to panic attacks. The fact that I was completely tied in knots by nerves and was able to finally break free doing the same kinds of preparation, mental strategies, and self-care that I now recommend gives me some authority. I am not inventing ideas or approaches—I have “been there” and I know what works.

I loved what you wrote about how singers today are constantly comparing themselves to studio-engineered, studio-perfected recordings, whereas in generations past, while making music in the home, they would have been more accepting that mistakes are a natural part of the process. Can you talk a bit about this? How do you see this phenomenon manifest itself in the students you work with?

Unfortunately it makes students’ anxiety worse as they fear that any mistake is a majorevent. No longer do I hear, “Was that high note OK?” or “Was that phrase better?” I hear, instead, “I suck!” and “That’s terrible!” And the vitriol spills over into harsh judgement of their peers, as well.

Fortunately, where I teach, students are required to go to numerous performances, and they observe, over time, that even the finest performers make mistakes. As audience members, they mature, and that helps their own performing.

I thoroughly enjoy the Met simulcast performances and wished I had required my studio to attend this season’s The Merry Widow, not only because of the beautiful singing, dancing, acting, sets, and costumes but also because there were obvious mistakes during a men’s ensemble scene. At the Met! But they recovered and the Earth still turned on its axis!

Does performance anxiety ever really go away or do we just learn how to manage it?

I believe it gets easier and easier with experience to stay on the “excitement” side of the coin and not dip over into anxiety. We never want to lose that edge—that is what gives performances their impact and sparkle.

Do you still struggle with your own performance anxiety?

Do I still get nervous and excited when performing, lecturing, or giving workshops? Certainly. Do I struggle? No. I now know how to prepare and how to channel the energy into excitement!

For more information on the author, the book, or The Confident Performer Workshops, please visit
www.sharonstohrer.com.