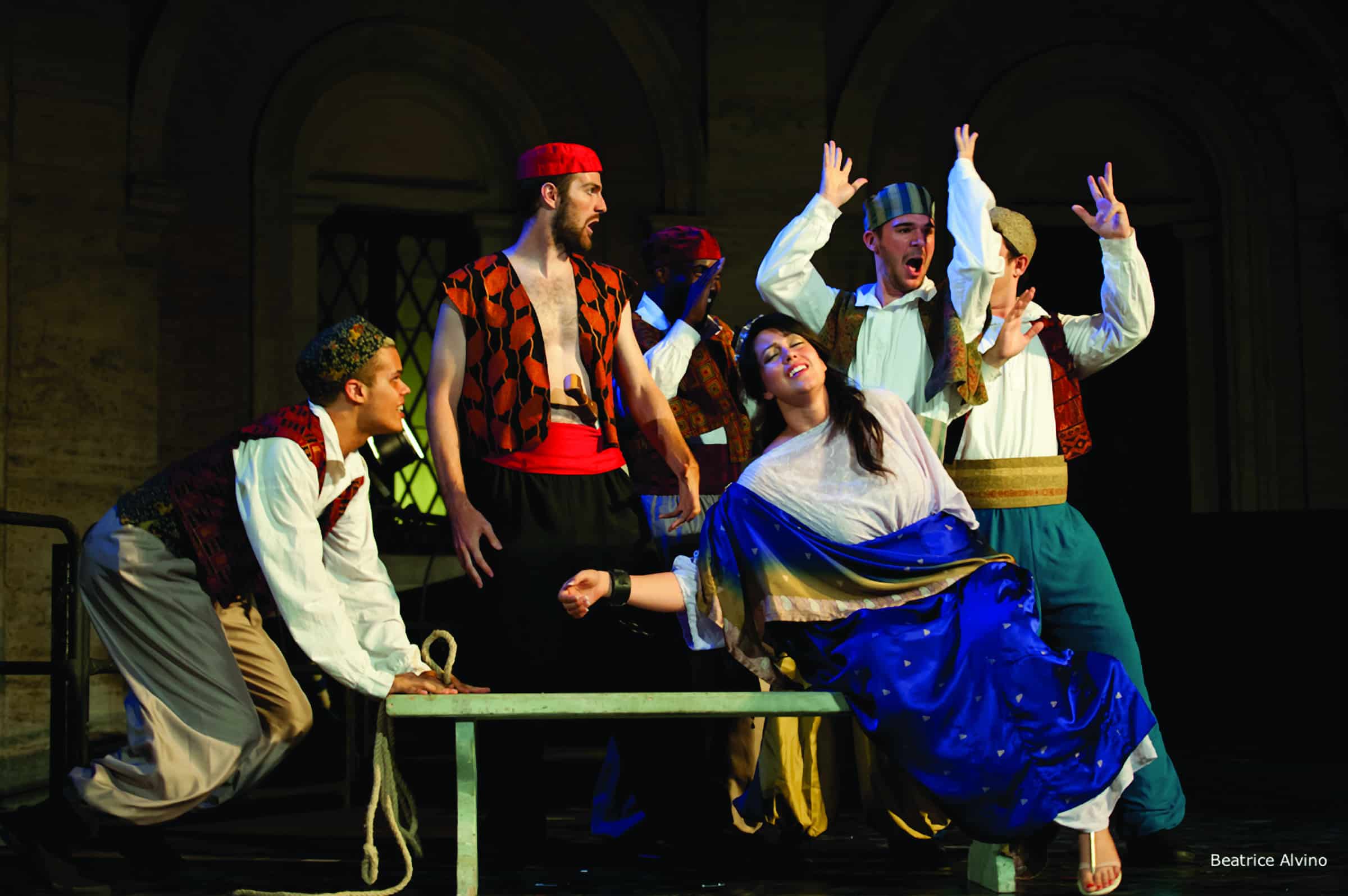 The scene is a church in Rome as the backdrop for an Italian opera. That scenario might normally apply to Tosca—but in this case, a group of young women is performing Suor Angelica, part of Operafestival di Roma (OFR), an award-winning, four-week opera training program.

OFR was launched in 1994 by the late Louisa Panou, artistic director for 11 years, to give students “a European experience,” according to Todd Queen, OFR’s executive director and dean of Louisiana State University’s (LSU) College of Music & Dramatic Arts. Coincidentally, Panou was director of opera during Queen’s student days at Brigham Young University. During her career, Panou taught voice and directed opera at several universities.

Now biennial, OFR used to take place every year and only in Rome, but the program has evolved while holding true to Panou’s original vision. “More than anything,” Queen says, “she valued great singing and great acting. We have beautiful costumes but no lavish sets. Singing and acting are top of mind.”

And, besides the fact that the program takes place in Rome, why is the emphasis on Italian operas? “It tends to be the language that opera singers encounter a lot and it’s good for young singers,” Queen says. “The Italian repertoire is accessible with operas appropriate for college-aged students. Germanic and French singing are typically more advanced literature for more advanced singers.” Thus, OFR students are likely to sing Mozart, Rossini, Verdi, and/or Puccini; the repertoire is selected to ensure many parts for many voice types.

Queen himself nearly became a student in the program but ended up with much more. As he relates, it was the early 2000s when he arrived for an audition. “I walked into the room and there was Louisa! In her Greek-Italian accent, she said, ‘Todd, you were lost, but now you are found!’

“She had an amazing, larger-than-life, force-of-nature personality. I sang for her and she invited me to come be on the faculty and a guest artist.” Only a few years later, in 2006, Panou passed away from pancreatic cancer. Queen remained on the faculty until 2008.

Her failing health had prompted a series of leadership changes that resulted in OFR’s current format. For six years, the program continued under the trio of Panou’s husband Bill Welty as managing director, then-faculty member Melanie Kohn Day (associate professor of music and director of opera at Virginia Commonwealth University) as artistic director, and Day’s husband Roland Karnatz as technical director.

The time came when Welty wanted to retire, however, so the program closed after the 2010 season. Tony Offerle, an OFR faculty member since 2000 and associate professor of voice and opera at the University of Florida, wanted to see it continue. Two years after the closing, Welty agreed that the University of Florida could take it over, and Offerle served as artistic director.

In the meantime, Queen had co-founded the summer intensive Opera Orvieto in 2011, so Opera Orvieto and OFR joined forces in 2014 with LSU overseeing OFR and Queen becoming executive director. “Even with the leadership changes and the expansion from one city to two, Operafestival di Roma still has all the great benefits of Louisa’s concept,” Offerle says.

Those benefits include multiple performance opportunities for all students, including concerts and fully staged operas with single or double casts and a professional orchestra, coachings, masterclasses, and the chance to perform in two beautiful venues: Orvieto’s six-level, acoustically rich, 560-seat Teatro Mancinelli that dates from 1838 and Rome’s St. Paul’s Within the Walls. “It is a beautiful church with cathedral-esque acoustics—an amazing backdrop for Suor Angelica,” Queen says. From a living perspective, singers enjoy a contrast between the small-town feel of Orvieto and the big city of Rome.

Whom do the 40–45 participants include? “We look for singers who have a good technique, and they need to be good people with a work ethic,” Queen says. OFR has no minimum or maximum age; both adult and high school singers have attended.

Regardless of their background, singers receive an individualized approach. “We assess where they are in their vocal progress and in their stage experience,” Queen says. “For some students, this is their first time onstage, while others have had multiple roles.”

When singers audition successfully, they receive an acceptance letter with role offers. OFR artistic director Dennis Jesse, baritone and associate professor of voice at LSU, hears the auditions and oversees casting. “If I have questions about a student’s abilities in a role that I am considering them for,” Jesse says, “I will call their [voice] teacher for input. My goal is always for the students to have the most positive learning experience. We want to raise their expectations from seeing themselves simply as students to looking at themselves as young professionals.

“We also want to help identify what in their skill set needs to be improved for them to make it in this competitive industry.” He mentions other factors involved in casting that may not be obvious. “Do I think that the student has the stamina for both the role and the pressures that come with putting a role together quickly, along with singing in Italian in Italy, where everyone will be critical of diction?”

Jesse adds, “The faculty is committed to moving everyone to the next level—and maybe even a few levels if the student is dedicated to that kind of progress.” Teachers include tenor Sam Savage, director of voice studies and the opera ensemble at Purdue University; soprano Sandra Moon, associate professor of voice at LSU; vocal coach and pianist/accompanist Laura Friesen; stage director Dugg McDonough, Mary Barrett Fruehan associate professor of opera and artistic director of LSU Opera; and baritone Offerle, stage director and voice teacher who directs OFR’s productions of Suor Angelica.

In the spirit of “great singing and great acting,” Offerle focuses on character analysis in Puccini. Generally, for any opera, he helps singers build a backstory for their character and figure out both where the character is in a moment and what the vision is for that moment. “I love doing an exercise called an ‘exaggeration run’ with heightened emotions and dramatic gestures to get singers out of their shell,” Offerle says.

“It’s fun and it gets them away from being careful. A performer who’s careful—who’s worried about what they look like in a performance situation—has always got handcuffs on. When you can break those handcuffs off and let them be, they realize, ‘No one’s watching me. I can enjoy being the character and don’t have to be self-conscious.’”

A recent singer in Suor Angelica was soprano Jenna Grissom, who studies at LSU and decided to attend OFR in 2017 and 2019 because of the roles she was offered. She came to the program having been involved with Opera Memphis since age 11, beginning with their summer conservatory and then singing in their chorus. She also sang in LSU productions and attended three other Young Artist Programs in Europe. “Out of all four European summer programs I have been to, Operafestival di Roma gives you the most bang for your buck,” she says.

“Singers are typically involved in two or more productions, and tuition includes masterclasses, coaching sessions, lessons, housing, and two meals a day. Operafestival di Roma succeeds in challenging a wide array of singers. The staff are wonderful about gauging the skill level of the participants and challenging them accordingly.”

Grissom also thrived on the Italian culture, such as festivals and being able to form friendships with residents of Orvieto. “It’s not the sort of thing you can get from a quick visit,” she observes. “This invaluable international experience taught me the beauty of exploring an environment that is totally different than your own. By living abroad for this brief time, I gained a greater understanding of what it means to be a foreigner in someone else’s country. This instills a sense of ambassadorship and empathy toward those visiting your own country.”

Not insignificantly, Grissom also acquired a deeper understanding of the context of Suor Angelica. “I learned what an important role the Catholic Church has played in Italian history and culture,” Grissom says. “Not being raised Catholic, I was unfamiliar with the rituals of this religion. As a nun, however, Suor Angelica would have been extremely well versed in the rites and teachings of the Roman Catholic Church. Being able to tour various churches and visit the extraordinarily beautiful Duomo in Orvieto, I was able to better grasp the depth of the relationship between Italy, opera, and Catholicism.”

While Grissom had visited Italy prior to OFR and relished returning, lyric soprano Mary Claire Curran had never been to Italy or participated in a summer program when she attended OFR as a mezzo-soprano in 2009 after her sophomore year at the University of North Carolina–Wilmington (UNCW). She was a self-described “late bloomer,” having begun private voice lessons only two years earlier. “I was a big fish in a small pond at UNCW, but my experiences were limited to choir solos and opera scenes,” Curran says. Since OFR, she has also loved traveling internationally. “Being immersed in a different culture for three whole weeks takes you out of your comfort zone but helps broaden your perspective of the world.”

Curran’s strongest memories of OFR? “Polishing my craft and kick-starting my competitive edge,” she says. “Being surrounded by new teachers and singers helped to develop my ears and musicianship skills. I felt there were many fine singers at Operafestival di Roma and I had to work extra hard on learning and memorizing my music better and incorporating the coaches’ and teachers’ feedback faster.”

That environment, with intensive rehearsals and coaching sessions, prompts Offerle to summarize, “Students are never at a loss for a challenging musical experience at Operafestival di Roma, day in and day out.”

Operafestival di Roma (operafest.com) will next be held in 2021. Application information will be available later in 2020.

Greg Waxberg is a writer and magazine editor for The Pingry School and an award-winning freelance writer. He can be contacted at GregOpera@aol.com.