ver the years, I have had many questions about the thyroid gland and how its function (and dysfunction) impacts us—singers in particular. In the next few paragraphs, we will look at this important structure, how it functions, what can go wrong, and how it can be treated, specifically from the vocalist’s point of view. 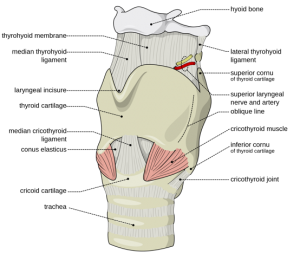 The anatomical location of the thyroid gland is of interest to singers, since its two vertically elongated lobes sit on either side of the lower larynx and upper trachea. The two lobes are connected by a narrow isthmus that straddles the neck about the level of the cricoid, so the overall appearance of the gland is like a letter “H”. The lower ends of the “H” are covered by muscles, so that a sized normal gland is pretty unobtrusive to a casual examination.

The thyroid gland is one of the endocrine glands of the body. This simply means that its secretions (hormones) are liberated directly into the circulation, rather than exocrine glands (like sweat glands) whose secretions appear on the outside of the body. (Remember that topologically the body is like a hollow tube: like a donut, so “outside” refers to both the outer surface of its substance and the hole in the middle, and that “surface” can refer to the skin or into the gut, such as the enzyme rich fluid in gastric juices or saliva).

The thyroid gland is the body’s thermostat: it controls the rate of metabolism, how quickly the body burns up its nutrients. Like most structures in the body, in healthy individuals, a normally functioning thyroid gland “flies below the radar.”

However, if the thermostat is turned up (hyperthyroidism), a person can become “hyper”: excessively energetic, hands showing a fine tremor, sweating and feeling hot, losing weight, with a rapid heart beat. By contrast, if the thermostat is turned down (hypothyroidism), the complaints are chronic fatigue, sluggishness, weight gain, and a constant feeling of cold. With hypothyroidism, there are other symptoms that can be more subtle and generic, such as constipation, abnormally heavy periods, and hair and skin problems. Overall, hypothyroidism is much more common than hyperthyroidism.

While significant over- or under-function of the thyroid is not difficult to diagnose, here’s the problem: in many situations, the dysfunction may be mild, and unsuspected. It is my opinion that mild or borderline hypothyroidism is frequently overlooked. After all, given our busy and stressful lives, is there anyone who doesn’t “feel tired all the time?” And who couldn’t lose a couple of pounds? Many symptoms, especially of hypothyroidism, seem rather nonspecific, and it takes a heightened degree of suspicion to identify the cause. A couple of clues can be helpful, however. Hypothyroidism is more common in middle aged women, and often exists in the presence of other autoimmune conditions such as arthritis.

Let’s now look at how thyroid dysfunction can specifically affect the singer. If the thyroid is overactive, it  may cause a tremor which can affect not only the hands, but also the voice. This is a fine irregular oscillation of the voice which, unlike a vibrato, is involuntary and can not be controlled. While it would be uncommon for hyperthyroidism to present with this isolated symptom, we would certainly suspect thyroid excess, especially if the other symptoms, listed above, are present.

Much more insidious is the effect of borderline or mild hypothyroidism on the voice. In this condition, the larynx becomes less agile, and loses range and volume. The voice also loses color and projection, somewhat like we see in those who retain excessive fluid before their period. Unlike premenstrual voice “thickening,” however, the problem in a hypothyroid singer does not go away, and may lead to harmful compensatory vocal strategies. If a well-trained and experienced singer, especially in middle age, develops the persistent vocal changes described above, investigation of the cause should include a blood test to check for thyroid hormone levels.

Finally, a few words about thyroid surgery. While most cases of low thyroid (and some cases of high thyroid) function can be treated medically, occasionally the  removal of part or all of the thyroid gland may be necessary. Some indications for this would be an abnormal gland suggestive of cancer, or a gland (usually under-active) that has grown so much in size as to be pressing on adjacent structures in the neck.

Again from the singer’s point of view, an important issue with thyroid surgery is the uncommon possibility of injury to the nerve(s) that move the vocal folds. These nerves (called the recurrent laryngeal nerves) run next to the gland, and are sometimes intimately associated with the gland tissue. Preserving the nerves is important for every patient, but especially for singers. Occasionally the nerve needs to be moved, even stretched, to gain access to the gland, but rarely it is more permanently damaged. If you, as a singer, do need thyroid surgery, I recommend getting multiple opinions, and choosing a surgeon with a lot of experience and a good track record who understands what is at stake in terms of your profession. Of course, in cases of cancer, curing the patient of the disease takes precedence, so many factors need to be weighed.