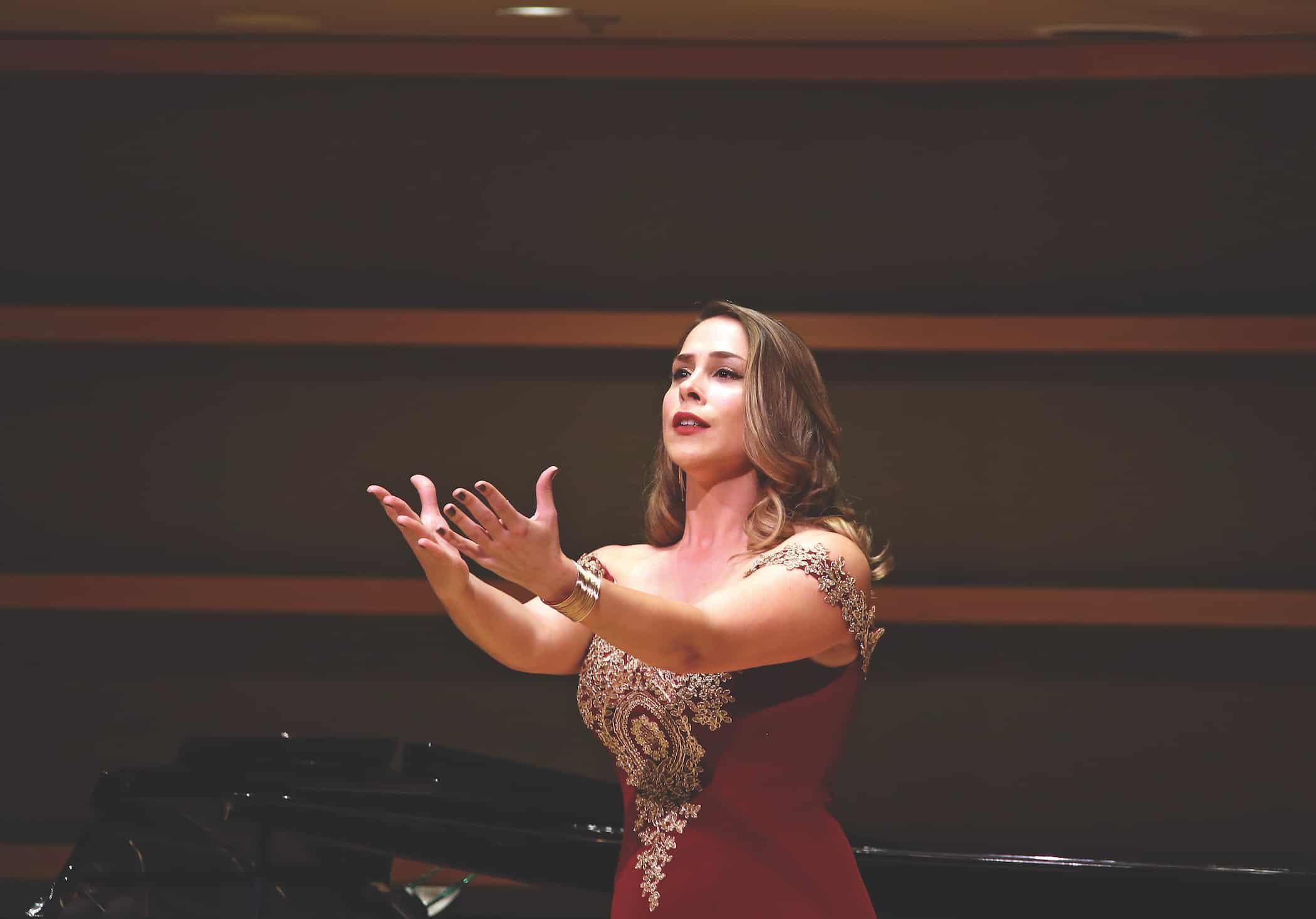 The prestigious Academy of Vocal Arts honors its past and looks toward its future with a new leader and steadfast mission in its 85th year.

The success story of the Academy of Vocal Arts (AVA) is nothing short of astonishing—if not a bit surprising.

The year was 1934. As the United States toiled through the depths of the Great Depression, one woman believed there was a need to develop a school for talented vocalists and to help continue the operatic art form.

At such a school, singers would receive the highest quality of professional training in honing their artistic skill set. Not only that, but due to the high cost for such training—unaffordable to most during the tough times—the school would operate on a tuition-free basis.

More than eight decades later, the organization nestled along Philadelphia’s historic Spruce Street has risen in the ranks and today is widely regarded as one of the most prestigious training grounds available to budding young opera singers.

“We came from humble beginnings,” says K. James McDowell, president and artistic director of the Academy of Vocal Arts since 1987. After working as an apprentice with Santa Fe Opera and graduating from the Curtis Institute of Music, he attended the Academy of Vocal Arts, where he would go on to sing several leading baritone roles before turning his focus to business administration.

“There were few singers,” he adds. “Our first opera production wasn’t until 1940. But through World War II, we grew. And we began attracting more singers and seeing them take on careers at major opera houses.”

With that growth, more and more singers have been put on the musical map throughout the years.

Since its inception, the Academy of Vocal Arts is credited with helping launch the careers of countless operatic luminaries, with approximately 50 alumni joining the roster of the Metropolitan Opera since 1980.

Alumni from the organization also have been recognized with five Richard Tucker Awards and five Beverly Sills Artist Awards, distributed by the Metropolitan Opera.

Today, the Academy of Vocal Arts is marking its 85th year. It also recently welcomed a new vice president and general manager and continues keeping an eye to the future in an ever-evolving industry. Yet, it never loses sight of its most valued mission: the singer.

“The focus for us always comes back to the music,” McDowell says. “We want students to be prepared both musically and dramatically for professional careers and for what is needed for a sustainable career in opera today. What sets us apart is that this is all we do, all day long, every day. It’s our sole focus.”

Continuing as the only tuition-free educational institution dedicated exclusively to the study of voice, the Academy of Vocal Arts’ four-year program is highly competitive, selecting approximately 30 singers in a given year.

Those who audition and are accepted into the program are immersed in one-on-one repertoire coaching, weekly voice lessons, language classes, movement and dance, stagecraft and stage combat, opera history and vocal care seminars, and professional development preparation. This is led by a faculty of coaches, conductors, voice and course instructors, accompanists, and guest artists who represent some of the best in the industry.

The school also produces three to four fully staged operatic productions with orchestra each year, with visiting professional stage directors at the helm.

“We are very careful in the operas we select for our roster of singers,” McDowell says. “We fit the repertoire to the singers, finding ways to stretch their abilities in a way that will strengthen them if there is potential in the voice, but also keep them in roles that are safe for them to be singing. That means if we produced Così fan tutte three years ago and we decide to produce it again because it’s the right fit for our singers, that’s what we’ll do. If the opera is not the right fit, we don’t do it.”

Chamber music recitals, sacred music concerts, and an annual voice competition also round out the academy’s offerings with additional opportunities for resident artists to audition for visiting companies as well as agents and managers.

Merit-based fellowships also are available to help offset the cost of living expenses while enrolled at the Academy of Vocal Arts.

In addition to building a balanced roster of voices, the academy seeks singers who not only sing well, but who possess a “certain something” that sets them apart.

“What we’re looking for is the greatest potential of voices,” McDowell says. “And after years of doing what we do, there is a lot of trust in the faculty in being able to do that and continuing building upon what we do. What stands out are singers who are expressive. Maybe there is still development needed in the voice, but there is something in the sound that is unique and worth investing in. We work to bring that out.”

In July 2019, a new vice president and general manager joined the staff of the Academy of Vocal Arts.

Scott Guzielek previously served as the director of artistic operations at Palm Beach Opera where he also led and directed the Benenson Young Artist and Bailey Apprentice Artist programs. Under his leadership, the programs grew from 8 to 18 singers who were coached and mentored by nationally acclaimed faculty and staff.

Other career highlights included serving as artistic administrator for Washington National Opera from 2006 to 2012 after beginning his time there as a special events manager in 2003.

Additionally, he is co-chair of OPERA America’s Artistic Administration Network and has judged competitions throughout the country, including the Metropolitan Opera National Council Auditions.

It was his passion for helping develop the careers of today’s emerging opera singers that led him to the Academy of Vocal Arts.

“The nature of many other companies is the focus on production—not always on how to help young singers make the best decision for their voices and careers,” Guzielek says. “[The Academy of Vocal Arts] is like my dream world. What appealed to me was its focus on the whole approach—how to sing, how to understand the size of their voice and how it works in the size of the hall, and the focus on the development of the voice.”

Guzielek was well acquainted with the Academy of Vocal Arts prior to joining its staff. “From my time working with young singers, I always believed that AVA was where true singing happened,” he says. “It’s a great team, where young singers benefit from great training, the opportunity to work with an orchestra, and participating in full operas rather than quasi productions. The focus always is on the singer and what will benefit them best.”

A “Hidden Gem’s” Eye toward the Future

Even prior to the 2008 recession, the operatic world began to see declining audience attendance numbers, loss of donor revenue and, simultaneously, a market saturated with more singers seeking fewer job opportunities.

How does an organization like the Academy of Vocal Arts combat this in the face of a changing marketplace?

Having emerged from the Great Depression, it’s almost like coming full circle.

“This business is hard,” Guzielek says. “But in our history, we have made it through times that challenged us. The Academy of Vocal Arts is well known in the opera world, and we’ll continue building upon our legacy.”

A major goal, Guzielek adds, will be building the Academy of Vocal Arts’ endowment fund as well as continuing to attract the best faculty and developing even more of an artistic presence in Philadelphia.

“We’re often called a ‘hidden gem’ in Philadelphia and it’s a reference I’m blown away by,” McDowell says. “The center of the city can be harder to crack into. We’d love to see ourselves in a larger venue for productions, so we’re exploring our options.”

The Academy of Vocal Arts also plans to continue doing what they’ve always done best: never wavering from its core mission of focusing on the training and development of great singers to be the best they can be.

“A lot of people tend to think that in opera, we don’t have the kind of voices that were once household names,” McDowell says. “That was a different time and there is so much more now competing for our attention. I truly believe we are still producing voices that are just as great every day.

“And we’ll continue giving these singers all the tools we can to hone their craft and achieve the best success in their singing and onstage that they can. We’re very proud of that distinction and we’ve seen a lot of successes come through AVA with our singers working in various capacities in opera. I don’t see us ever changing our mission.”