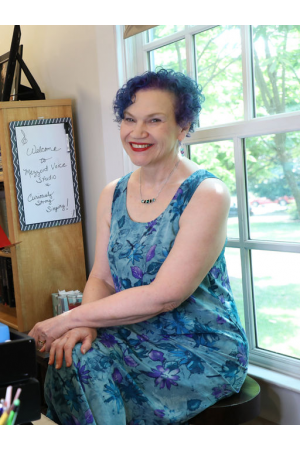 I’ll be honest – after my two years of teaching K-8 at a Catholic elementary school, I never thought I’d be a teacher again. I had day jobs in offices and thought that this would be what I did until my performing career REALLY took off. And then I went to graduate school, and right after that, I got a job as a legal secretary. Which I was good at, but as time went on, I thought that maybe teaching would give me the freedom that law firms weren’t willing to give me to take gigs and go on the road. I thought maybe I’d do that for awhile, and then get hired by a college (maybe even my alma mater, Peabody). And after a few years of teaching privately, I taught at two colleges in Milwaukee, and then, after moving to Maryland, I was adjunct at two community colleges in Howard and Baltimore Counties. I thought of these as stepping-stones to a full-time college job.

So although I started teaching privately because I thought it was better than being a legal secretary, eventually —

I discovered that I was really good at this!

And I realized that –

I really LIKED being a private teacher!

1. I like teaching in my own space (can’t beat the commute!)

2. I like choosing students’ repertoire based on their needs, rather than impersonal requirements, and evaluating their progress based on my own rubric rather than a departmentally defined one

3. I like creating new formats to challenge them and spur their growth as performers, rather than the one that’s been set in stone for years and years. This has been especially true during the pandemic.

Not only have I helped hundreds of people find their voices, I’ve found my own voice in the process.

It’s a LOT better than being a legal secretary!