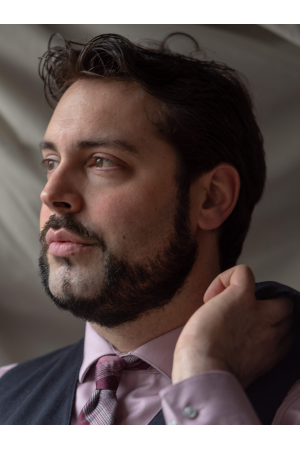 Baritone Jason Duika is quickly making a name for himself in the classical music world. Most recently, he sang the title role in Verdi’s “Nabucco” to great acclaim in October of 2019 with West Bay Opera, in California and last June, he sang the Baritone solos in Vaughan Williams “Dona Nobis Pacem” with Mid America Productions at Carnegie Hall’s 3,000 seat Isaac Stern Auditorium.

In last Spring’s portrayal of “Herode” in Massenet’s Herodiade, with New Amsterdam Opera, John Yohalem of Parterre Box noted, “Jason Duika has a sizable and remarkably lofty baritone, which should serve him well for Verdi roles - he topped “Vision Fugitive” with an A-flat. And yet his delivery seemed effortless, lyric, a melting, manly sound.” Also, last February, Jason sang his first Verdi title role, ‘Francesco Foscari’ in “I Due Foscari” with West Bay Opera. He also sang “Marcello” in ‘La Boheme’ there, in October of 2018, where the reviews said, “Jason Duika sang with glorious round tone, and unimpeachable legato.”

In February of 2018, Jason was asked to return to his Alma Mater, the Indiana University Jacobs School of Music and sing the lead Baritone role of Enrico, Lucia’s brother in Donizetti’s ‘Lucia di Lammermoor’. In his portrayal of “Enrico”, the critics said, “…A beautiful instrument, manly, generous and assured in timbre. Not only some, but many really stunning, thrilling notes in his delivery. Clearly an ideal role for him. Bravo! Onwards and upwards.” -Martin Snell, and, “Jacobs School alum and baritone Jason Duika returned to sing Enrico, Lucia’s brother. His villainous role was deftly offered, both musically and theatrically.” Peter Jacobi, The Herald Times. Being praised by Oregon music news for having a, “big, warm voice” and, “spot-on comic timing…”

This past April, Jason was to return to his Alma mater, Alma College, in Alma, Michigan to sing his first Elijah in their annual Masterworks concert, followed by returning to West Bay Opera for his first Germont in Verdi's La Traviata, but Covid canceled both. Jason makes his home in Dexter Michigan, and he is also under Randsman artist management with Peter Randsman in New York City, where he studies with Andrea DelGiudice.