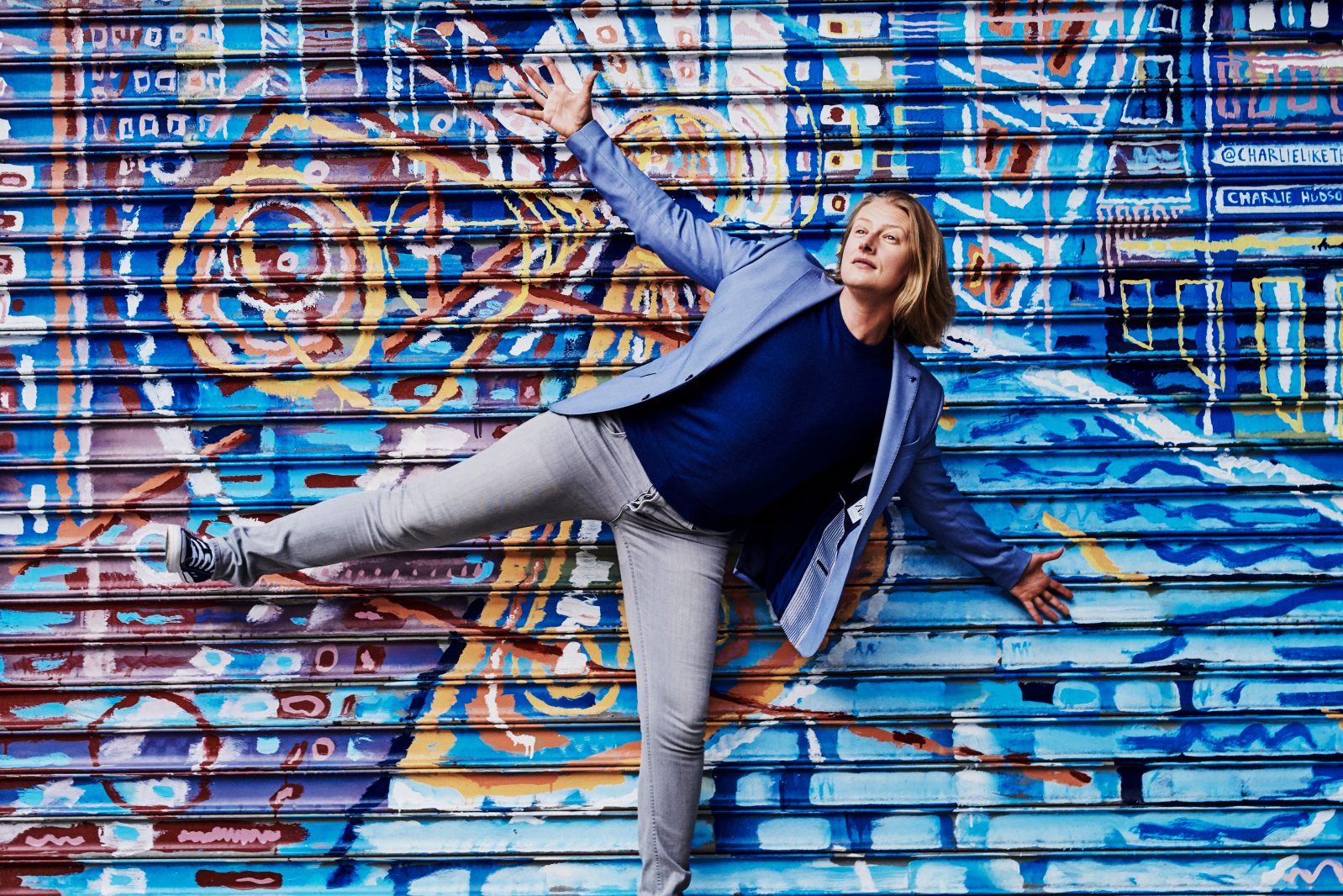 Baritone Lucas Bouk shares his experience on transitioning, retraining his voice during and post-transition, and a more inclusive future for opera.

I chatted with Lucas Bouk a few days after hearing him premiere a new work by Rosśa Crean on ChamberQUEER’s June concert at National Sawdust. We were in The Glade on Little Island, where Lucas made his baritone debut with On Site Opera singing Hannah-Before’s “Perfect Boy” from As One—a role he will revisit in a full production this September with Opera Steamboat, just two years after beginning his medical transition in September 2020.

Though out as a trans man, Lucas had continued to perform as a mezzo until the circumstances of the pandemic created enough time and space for him to begin taking testosterone. His experiences as a trans person in the opera industry before and during his transition have led him to feel strongly about sharing his experience to support other singers who are considering transitioning, and to advocate for changes within educational spaces and workplaces to ensure an inclusive environment for queer, trans, and gender nonconforming singers—which is ultimately beneficial to all.

His trajectory to this point is interesting because, as he says, “My singing voice never felt dysphoric to me, because onstage I got to be someone else. That’s why originally I didn’t think I would take testosterone, because I was happy while I was performing.” He also readily shares that his initial reservations had to do with internalized transphobia: “I thought the voice would be ‘less’ because that’s what I was told, and I believed that consciously or subconsciously.”

But moving through the world and the workplace as a male mezzo was confusing enough to others that it created tension and undue anxiety for Bouk. Furthermore, misgendering and a lack of accommodation for gender nonconformity and gender expansiveness in rehearsal facilities and company protocols were, and are, common. “It’s a really binary world—men’s and women’s dressing rooms, bathrooms,” he says. “There is no space in the facility for nonbinary individuals or spaces that are comfortable for trans people, or in the protocols: on the costume sheet, on the forms you fill out.”

The binary world of measurement sheets and dressing rooms seems to extend to Fach—that is, sopranos and mezzos “are” women, while tenors and basses “are” men, such that opera singers with a gender identity that does not align experience an extra layer to their nonconformity or transness—hence the discordant experiences Bouk describes.

Having made the decision to medically transition, Bouk got to work assembling his support team. “I see two voice teachers: Katherine Ciesinski, with whom I’ve studied for a long time and who provided a lot of emotional support, and Michael Chioldi, whom I previously didn’t know at all. Michael met me where I was vocally and treated me like a young baritone.” Bouk is careful to emphasize the individual nature of these decisions.

“You should find a teacher you trust. There are many teachers who specifically offer lessons for trans voices, if that’s important; it doesn’t need to be, though. And one person cannot offer everything you need, which is why you need a team that includes your community, care providers, voice teachers, and so on.” 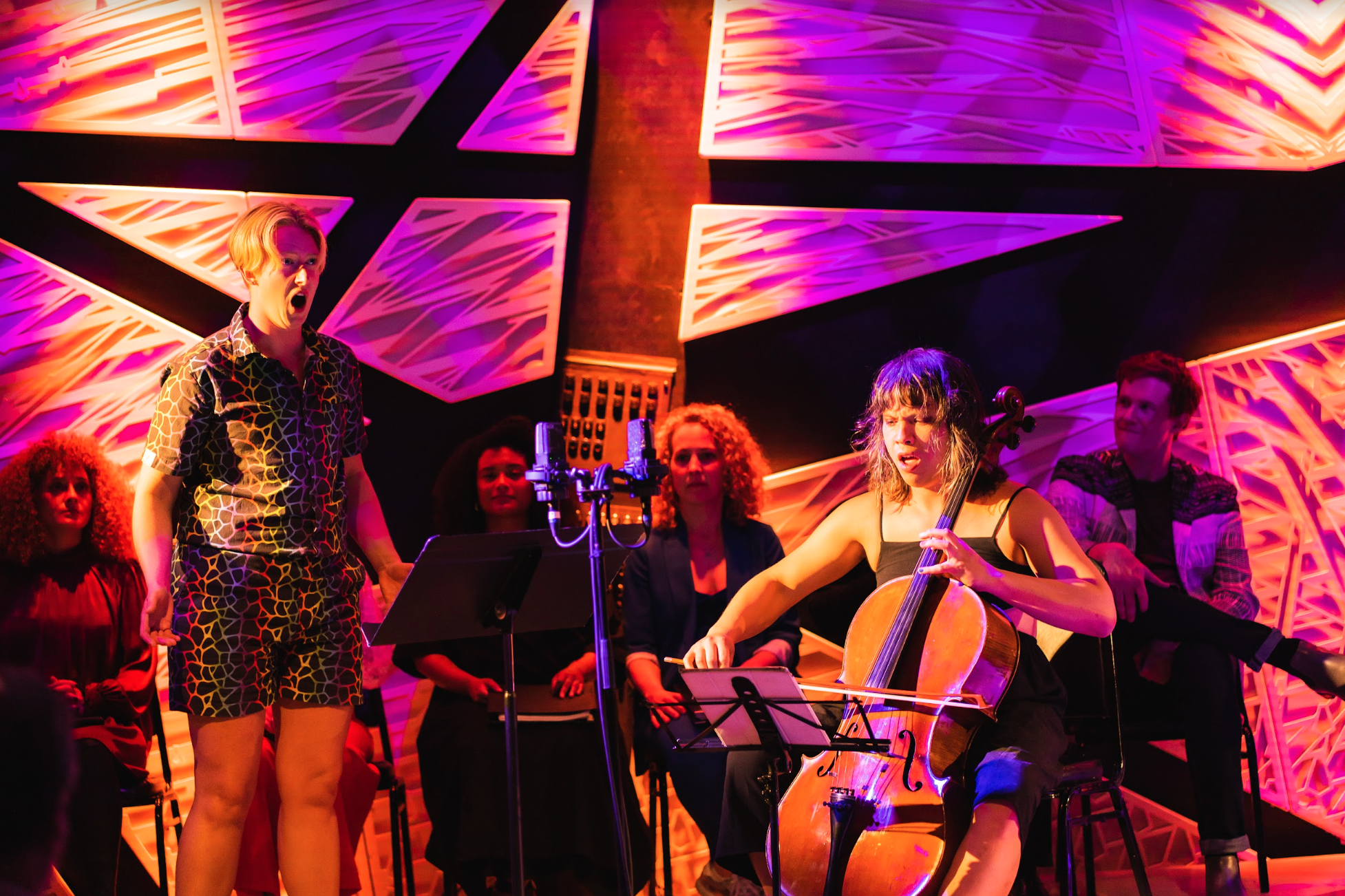 Transitioning can be costly, and the care of the voice adds an extra burden. “If I couldn’t afford voice lessons, I wouldn’t sound like this. That’s definitely a privilege,” Lucas says. “Marty Jeiven [a patron of the arts], who saw me in Princess Maleine [with dell’Arte Opera Ensemble in 2019], gave me some funds during the pandemic so I could take voice lessons during transition. And, luckily, medical transition is covered here in NYC by my insurance. I have great support at Callen-Lorde, where my provider was supportive and let me be in charge of my transition.”

The resources needed for a singer to safely and healthily transition, Lucas adds, are not just monetary. “I have a therapist, who I couldn’t live without, and support from my partner and my kid. And, of course, my community—friends, colleagues.” He also notes an additional consideration: “[Callen-Lorde] didn’t provide vocal therapy. I think a lot of transmasculine people, even nonsingers, could benefit from vocal therapy as they transition to keep their changing voices healthy and flexible.” I recommend visiting an ENT or speech-language pathologist to address this need, preferably one who regularly works with singers.

Many of these supports are not readily available to trans people, a historically underresourced and marginalized group, especially those who live outside of major urban centers. Even those who are located within larger institutional structures associated with some social privilege, like universities and conservatories, find that their needs are not adequately represented or addressed. Lucas explains, “Let’s say you’re in undergrad when you decide to transition. You may have to take extra years to finish your degree and require accommodations for pressures like recitals or juries during that time.”

Some support and guidance from professionals is also necessary, as figuring out what that plan should be is complex. “There are options as to how you transition, it’s so individual,” says Bouk. Removing undue financial and psychological burdens on trans students, and providing informed guidance specific to vocal development as well as other individual priorities, would simplify and clarify the path. 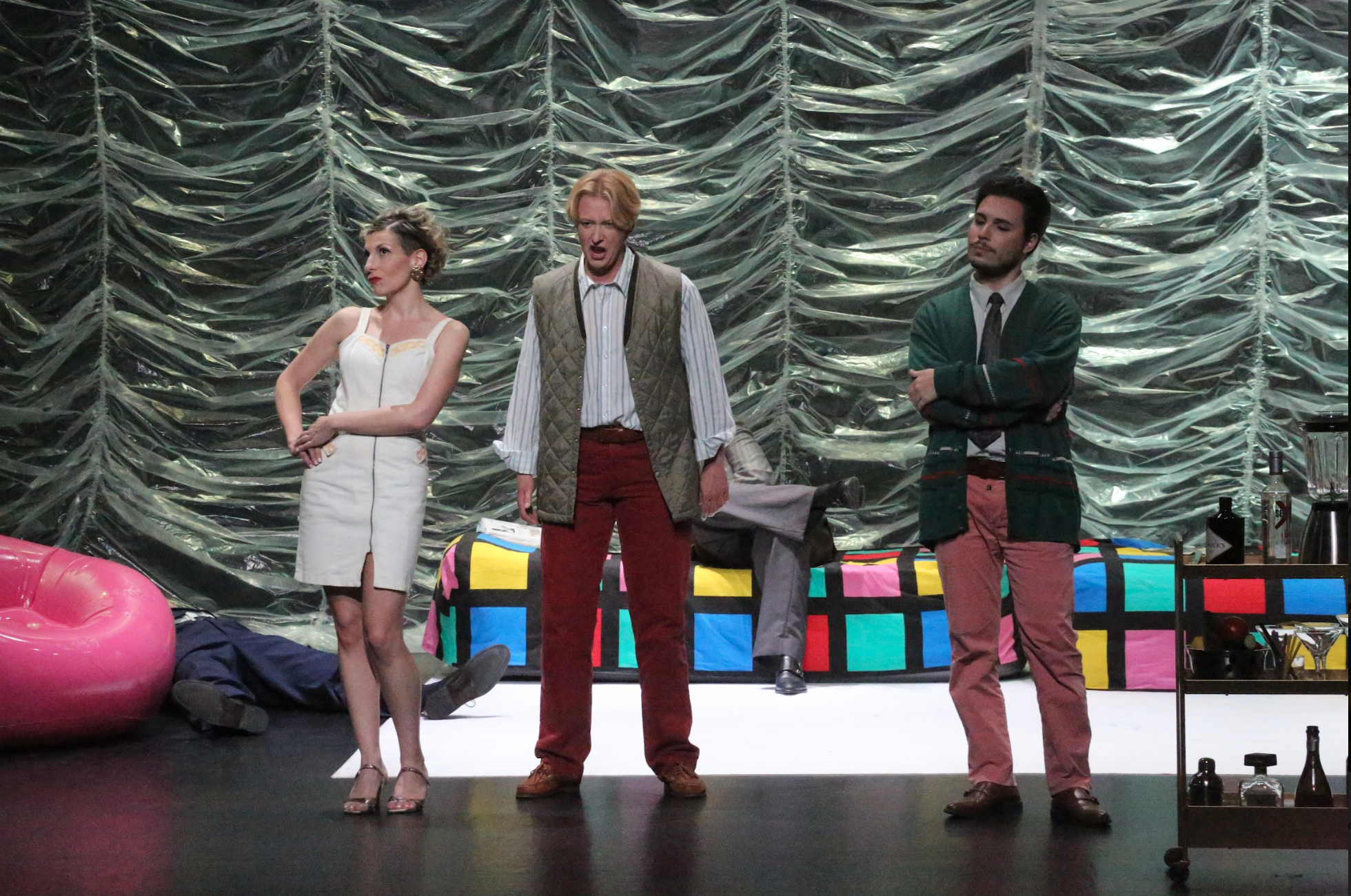 Lucas’ path was slow, steady, and consistent: “boring,” he laughs. At first, he microdosed testosterone, gaining slowly on the lower end of his register until the voice dropped fully about 6 or 7 months after beginning testosterone. He gave himself a further 6 months on a microdose, singing folk songs and the 24 Italian Songs and Arias, staying within an octave, and expanding gradually until he felt his instrument was stable and healthy. He began a standard dose of testosterone in September 2021. “More time was better … it gave me more time to get used to using the lower pitches.”

“That fall,” he continues, “I did chorus gigs to retrain, with New Amsterdam Opera and Opera Theater of Connecticut. In December, I learned “Se vuol ballare” for an audition that went really well.” Lucas emphasizes that this didn’t all come naturally. “I had to relearn how to match pitch, how to sing in choruses and fit in the harmony, and how to sing an aria with my new instrument. I had extra coaching on all the things that used to be second nature. It took me a whole month to learn Masetto.”

Hard work pays off, as his progress has been exponential since then. “By the time you heard me at ChamberQUEER,” Lucas told me, “I had covered new music [with Contemporaneous], sung Masetto with an orchestra [with Camerata Bardi’s training program], and been in rehearsals for four new operas [with American Opera Projects]. That trajectory was not something I even imagined in January 2022.”

When Bouk talks about his singing life post testosterone, he’s frank about some of the advantages he perceives himself having, as well as the very real challenges that retraining entails. “I’m doing this later in life, with years of experience being a singer and musician. Those skills haven’t changed—in fact, they’ve improved, because I had to regain them.”

What’s next for Bouk? “This summer I will sing Leporello with a student program. Both Masetto and Leporello are on the staff—bass-baritone roles, and I’m not a bass-baritone—but I’m solidifying the middle of my instrument and building stamina. This September I will sing As One in Colorado. At that point, it will be two years on T [testosterone]. That’s where I thought I would be starting to sing again!”

In terms of how things feel, aside from vocal considerations, Bouk is positive: “Many elements of my life now are easier, now that I have transitioned. Being onstage was always fun. But the offstage elements are better. I feel more comfortable in rehearsal; I’ll even make jokes, and people laugh.” His process of retraining has also had its effect. He says, “When I go to an audition now, I am really proud of myself. That deep pride is really steady and feels different from before.”

As Bouk performs with his new baritone roles, he is also committed to building awareness about queer and trans issues in opera and advocating for support and resources to create better conditions in school and workplaces. “That’s what I’d really like to see,” Lucas says. “I’m asking for change in the industry.”

There are changes to make in programming and recruitment, in the structure of facilities, and in protocol and policy. “Some are easy, like updates to a gender-neutral dress code or using gender-neutral language in rehearsals. Respecting people’s pronouns.” He gives an example of a concrete, helpful resource: “Make art songs available in many keys beyond the two or three in which they’re published. It means a lot when your teacher can help you find a wider variety of options when you’re planning your junior recital, for example, and your voice is changing every day.”

There are also more structural issues that require time, money, and resources. Creating gender-neutral facilities, changing organizational bylaws, and making accommodations accessible are all examples of this; and though they are more entangled and difficult, they are crucial.

Though medically transitioning came with its challenges and its unknowns, Bouk is emphatic in wanting other trans singers to know that if it is right for them, it’s possible. “Everything feels calmer. I feel less worried about what people are thinking. I feel steadier in my own self.” It looks different for everyone, and he strongly suggests building a team you trust and trusting your instincts. Since the process is so individual, there’s no framework.

And he advises not to get too hung up on “shoulds.” “There is no external validation driving this process. I have to wait and see what music this voice will want to sing. I have to put aside expectations. But also I have to acknowledge that in the world of opera there are so many possibilities. As long as my voice is healthy, I’ll be able to sing!”

Lucas Bouk is an operatic baritone. During the COVID pandemic, Bouk decided to begin his physical and vocal transition with testosterone. He made his official debut as a baritone with On Site Opera at the Little Island Festival in August 2021. During the 2022 season, Bouk performed Masetto in Don Giovanni with Camerata Bardi Vocal Academy in Syros, Greece, and recently created new roles with American Opera Project and NYU/Tisch Opera Lab. He headlined ChamberQUEER’s Pride Festival in June 2022 at National Sawdust, performing a new commission by Rosśa Crean & Bea Goodwin. Summer role debuts included Leporello in Don Giovanni, and Hannah-before in As One. Bouk is a proud transgender man and is incredibly happy to be singing again—with his new and authentic voice. For more, visit

Danielle Buonaiuto’s work is driven by community, compassion, and access. She is a cofounder of ChamberQUEER, a teaching artist with the Met Guild, and a PhD candidate at CUNY Graduate Center. An impassioned performer and advocate of new music, Buonaiuto can be seen on stages all over NYC from the Met to a porch in Ditmas Park, and as one half of the cello/soprano project Duo Calisto. Her album Marfa Songs is out on Starkland. Visit www.daniellebuonaiuto.com.