A few years ago, I wrote a column titled “What’s So Great about the ‘Twenty-Four Italian Songs and Arias’?” As I was teaching vocal literature this year, I revisited the different publications of the Italian songs and am enjoying some new additions. I hope the following updates prove helpful in your studies.

Vocal music majors will be assigned songs from the Twenty-Four Italian Songs and Arias as an introduction to lyric Italian diction. These masterpieces cannot, and should not, be avoided. The collection is affectionately referred to as “the voice teacher’s bible” because each song is filled with pedagogical opportunities to build classical vocal technique. These melodies were composed for singers by the finest composers of the day—including Giulio Caccini, who was a member of the Florentine Camerata. This group of Italian poets, philosophers, musicians, and humanists gathered at the home of Count Giovanni de’ Bardi and collectively created opera in the early 1600s.

Basic music history informs us that collaboration was the key to the Renaissance, and the Camerata began creating bigger staged works with more performers, pomp, and circumstance. Caccini wrote directions for ornamentation in Le nuove musiche, and Claudio Monteverdi solidified the operatic musical form with enough spectacle to make Italian audiences weep. Out of this extraordinary time in vocal music history, the European elite attended opera performances and began buying sheet music. “Lasciatemi morire!” from Monteverdi’s Arianna, was displayed on fortepianos in the most fashionable homes and remains a favorite in the Twenty-Four Italian Songs and Arias for many young singers.

At a glance, the traditional Italian songs may not appear virtuosic for the high coloratura voice or the basso profundo because the range is typically in the staff. These melodies are well suited for a comfortable tessitura in a developing voice. Stylistic ornamentation is appropriate, so the creative and knowledgeable singer can beautifully sing the early songs and still show off with higher and lower notes when the “A” section returns in “ABA” form or in fermatas, cadences, repeated verses, final phrases, etc. By listening to recordings of fine singers through the ages displaying their interpretations of these songs, you will hear Italianate legato worth the price of your college tuition and gather inspiration to compose your own ornamentation. Hot tip recommendations to begin your inspirational quest: Montserrat Caballé’s “Caro mio ben,” Pavarotti singing “Danza, danza, fanciulla gentile,” and Eglise Gutiérrez singing “Nel cor piu non mi sento.”

As time marched on, the best of the songs from this era were bundled into a package that you might know as the yellow book, or the purple book, or maybe a white book. With so many versions of the Italian songs, which one should you purchase?

Early Italian song scores notated only the melody and figured bass. The published editions vary because editors make personal choices in realizing the figured bass for piano accompaniment. The following descriptions of the different publications can help you choose, upgrade, or add to your Italian song collection. Be sure to #getitfromglendower at www.classicalvocalrep.com! 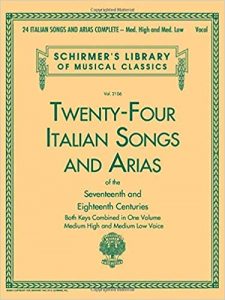 Alessandro Parisotti realized the piano accompaniments and edited the Twenty-Four Italian Songs and Arias in 1894. This yellow book is published by G. Schirmer and was held as the modern standard throughout the 20th century. 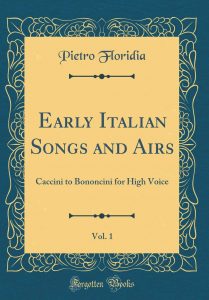 Through the years, these songs have been altered to suit modern tastes, and Pietro Floridia published these songs in 1923 with Oliver Ditson Company displaying liberal changes to the harmonies and accompaniments. In Floridia’s foreword to Early Italian Songs and Airs, he writes, “In this collection there has been no intention of entering the field sacred to those who devote themselves to . . . historic development of the Song. The aim of this edition is to present a selection from the best melodies of the early Italian masters in such a form that they can be fully understood and appreciated by everyone who loves music.” Floridia unabashedly romanticized the songs, and many singers enjoy this context and the additional songs included here, but they are no longer in publication. As always, if you are looking for music that is out of print, #getitfromglendower.

John Glenn Paton edited the 26 Italian Songs and Arias published by Alfred in 1991 in medium high and medium low keys. Paton wrote in his preface to the collection that his edition is dedicated to preserving the songs as they were originally intended.

He states, “The best composers of earlier times still have something important to give us. We can learn from them and enjoy their music if we have it in the most honest form possible. Most of these arias have been completely revised, using the earliest sources of information that could be found. If no early manuscript or printed source is known, the familiar version is left intact.”

Paton spent 15 years researching original manuscripts, and his edition presents piano realizations from figured bass, corrected text, and authentic harmonies that he perceived as the composers’ intentions. The purple book (medium high key) or blue book (medium low key) includes editor-suggested ornamentation, dynamics, and breath marks in lighter grey print. In my experience, however, the added ornaments can be confusing to novice singers trying to distinguish from the original music. Each song also includes a word-for-word translation and IPA. The academic additions and historically correct style of this project offered a significant upgrade to the Italian songs. 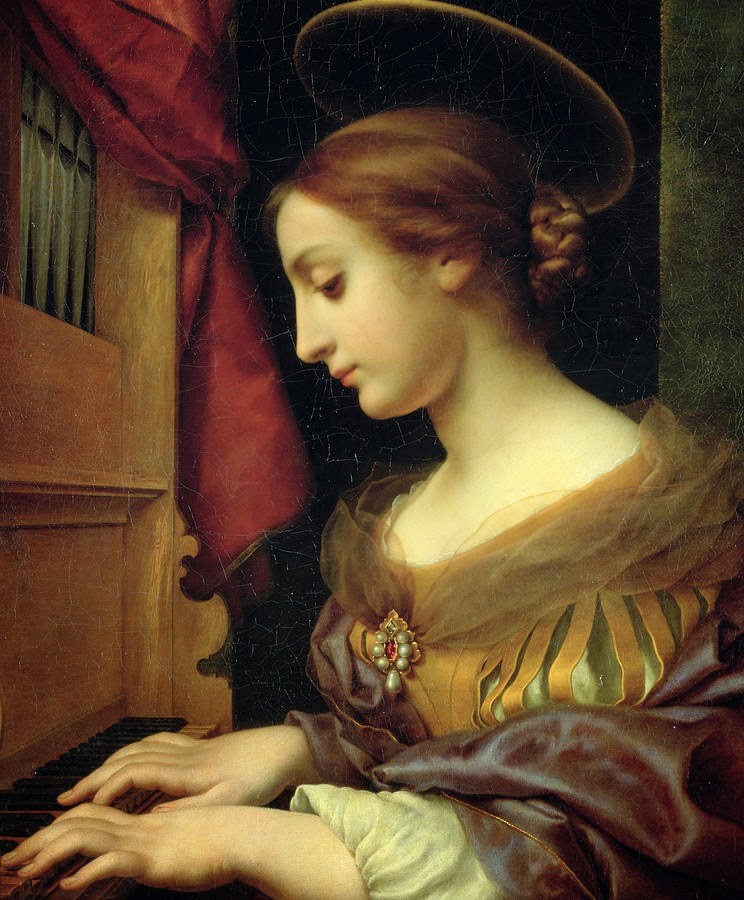 In his preface he writes, “I have not introduced any editorial dynamics, since singers until the mid-18th century were in the habit of applying their own, based on the words they were singing. Today’s singers should do the same—there is no reason to suppose that singers in the 21st century are less imaginative and intelligent. Neither have I introduced editorial phrasing . . . or tempo markings, nor suggested any ornamentation for the vocal lines. This does not mean that singers should forgo ornamentation . . . but I have preferred to leave this to the singer’s own taste.”

In 2008, Richard Walters published his editions of 28 Italian Songs and Arias with G. Schirmer, Inc. based on the Arie Antiche by Alessandro Parisotti in 1885. This collection features each song available in five keys: high, medium high, medium, medium low, and low.

Walters includes brief history of each song, IPA, and word-for-word translations by Martha Gerhart and adds no editorial ornamentation. There is a companion pronunciation guide on CD, which is also available for online streaming. I use this collection in my studio teaching because of the additional range options; the IPA/translations for study; and the clean, easy-to-read printing quality. For voice teachers tiring of hunting for the right book during lesson times, there is a bound edition of each song in all five keys.

Some pianists and teachers with experience prior to 1991 prefer the Parisotti realizations (the yellow book) because we learned these versions when we were students, but scholarly musicians will choose the newer publications for stylistic authenticity. NATS has made no ruling on the matter, so although classical singers may still use the phrase “24 Italian songs and arias,” please know that whichever edition you have purchased is going to be a meaningful study. If you have a choice, Carol Kimball wrote in her authoritative book Song, “It is important to choose the most authentic published version available.” 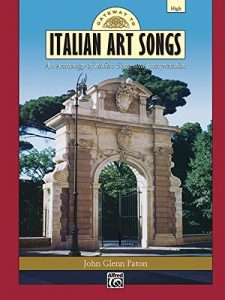 Secretly tiring of “Caro mio ben” or longing to move beyond the Baroque era and sing art songs by Tosti, Donizetti, Verdi, etc.? Another favorite publication on my shelf is Gateway to Italian Art Songs edited by John Glenn Paton and published by Alfred in 2004. The “Gateway” opens a path less traveled by compiling different Italian songs from the Baroque as well as including songs from the Classical and Romantic periods.

Each song in the collection is presented with scholarly background information, IPA, word-for-word translations, and diction guides. At the end of the book is a list of musical terminology and a list of Italian phonemes and their English counterparts. The research in this book can help a music major understand style and sing with clear diction. It also provides source material for academic research or program notes. 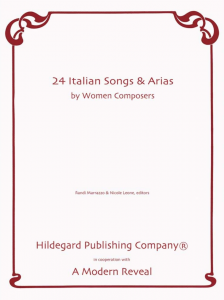 In 2020, Hildegard Publishing Company gifted us with a new treasure chest of songs: 24 Italian Songs & Arias by Women Composers. Editors Randi Marrazzo and Nicole Leone have launched the project A Modern Reveal (www.amodernreveal.com) to “amplify the voices of underrepresented historical female composers and promote their music.” For those of us striving to program music that is representative of our student bodies, this edition will serve singers of all levels.

One example includes a canzonetta by Francesca Caccini, Chi desia di saper. This strophic song, composed mostly of half notes in 6/2 and 3/2 time, is wonderfully accessible for a singer new to Italian. There are songs for intermediate level singers by composers Barbara Strozzi, Isabella Colbran (married to Rossini), and Rosa Giacinta Badalla. Advanced students and professional singers will enjoy some elite settings of Pietro Metastasio’s poetry by Louise Reichardt and some previously unpublished songs of Pauline Viardot-García.

Scott Gendel has published eight songs of the traditional 24 with the original melodies intact, but he has composed contemporary and virtuosic piano parts. On his website www.scottgendel.com, the composer writes, “My intent is not to parody these songs or ironically distance the listener from them; rather, I seek to sincerely reinterpret them in new and exciting ways. It is my hope that the charm of the original melodies coexisting with my new settings will allow the resulting songs to be immediately appealing, musically complex, and intellectually rewarding.”

If you are looking for a new slant on the classic melodies, Gendel’s reimagined songs are available at

Richard Pearson Thomas’ Ossessione presents another modern offering of the Italian songs that made me swoon. In a music festival review where this work was performed, June LeBell wrote, “In his Ossessione set for mezzo, piano, and string quartet, Thomas took four well-known Italian songs from the 17th and 18th century and reset the melodies and words into a cycle reminiscent of Pulcinella, in which Stravinsky took some songs of the same period, including Pergolesi’s ‘Se tu m’ami,’ and gave them a distinctly 20th-century twist. Thomas’ take is a little like what Stravinsky might have done had he been living today.”

These compositions would be a sensational addition to a senior or graduate recital for students who have studied the originals and are ready for a creative twist.

These works, composed by Judith Cloud and published by CloudWalk Press in 2020, have accessible new melodies to the original Italian texts. She has composed new melodies and accompaniments and she states in her preface, “They offer a welcome change both melodically and harmonically and many have a limited range with a comfortable tessitura.” Students might enjoy studying these songs alongside their original counterparts as an extended study of the Italian.

The Test of Time

By practicing these songs with attention to technical detail and the grand musical gesture of the early Italian era, you will discover for yourself why these songs have withstood the test of time. Carry on the tradition of the masters by learning and performing these marvelous songs as only you can.