As an entrepreneur who is also a singer, I love that the root of the word “entrepreneur” comes from the Italian word impresa, meaning “an enterprise or undertaking.” An Italian impresario, or entrepreneur, was analogous to a film producer—someone in charge of all aspects of a singing production.

My own story has been an unusual one, and one in which job creation has played a pivotal role. In college, while training in voice, I started a company called Sittercity.com that has now created over a million jobs for caregivers across the world. I ran it for 10 years from 2000-2010 and, while I managed to get my masters in opera performance from Northwestern during its growth, it was quite hard to run the company and sing at the same time.

In order to be able to perform while stuck in Chicago with a growing Web company, my friend Mary Lutz and I created an opera company 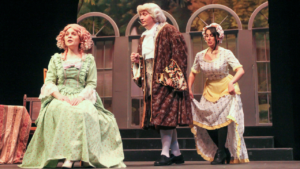 called OperaModa. The goal of the company, as you would expect, was simply for us to be able to sing and to employ young emerging artists in the Chicago area along with ourselves.

Mary and I went from 0 to 60 very fast. Eight months after deciding to create OperaModa, we put together a full-scale show featuring young opera singers in the 1000-seat Athenaeum Theater in Chicago with an 11-person orchestra. We had a website, opening series of grants, an advisory board, a marketing plan, a PR plan, a stage director, musical director, stage manager, and intern. We formed an ensemble cast of 12 strong singers from the area, each a graduate of a local performance school.

It was a backbreaking amount of work. I remember nights where I would fall asleep over 45-page grant applications, and the initial marketing had us literally chasing people in the street with flyers. Our first show, Kirke Mechem’s Tartuffe, was a success. We were thrilled.

The following year, though, a harsh reality set in. I remember vividly the first time I realized that singers could (and would) rip into other singers that cast themselves in companies of their own creation. A soprano I had trained with at Northwestern put in a social media account that she thought it was “disgusting” that we were casting ourselves and that she would “never, under any circumstances” audition for our company. That, of course, put her onto our “no audition” list very fast, but we were puzzled. Why would she not audition? Why was she angry? We were certainly casting sopranos, as both lead roles and understudies. We were making jobs! It made no sense.

I have begun to realize, over time, that there is a correlation between the most vicious criticizers and unrealistic views of the opera world. I would be the first person to understand unrealistic expectations in recent graduates of opera programs—I had had them myself. On my first day of my master’s work in opera at Northwestern, we were delivered the cheery news that 90 percent of us would not make it. Did I listen? No. I nodded my head and went on dreaming about my Met debut, like the rest of the class.

It takes a strong visionary to translate a composer’s vision into sung performance—but that same talent for vision can sometimes delude a singer when it’s projected onto an outside world that might not be able to support it. The problem is when this vision leads young singers to actively burn bridges with potential employers. One young soprano we hired to sing a few songs in a concert with us blogged later that she’d been “slumming it” with a crappy new opera company. This same show had garnered great reviews from audience and critics alike, and the other singers, all older and more established, had been grateful for the opportunity. Google alerts picked up her blog post and delivered it to us. How can we hire her again? It’s a real shame.

There’s also a correlation between sopranos and complaints. This makes sense. In a world that’s top-heavy with high female voices, I am sure it’s incredibly frustrating to feel like you just don’t have a chance at getting cast because of pre-casting. The interesting thing about this dilemma is that I have lived it too from both sides. When first out of school, I was an understudy for a singer in a small, singer-run opera company. At the time, I took the chance to understudy for granted. I was annoyed that I didn’t get at least one show to sing the lead role in. I stomped through chorus rehearsals just waiting to be done with the show so that I could continue auditioning, and I didn’t even put it on my résumé. Now I realize that I lost an awesome chance to both bolster my résumé and to learn from singers that were not only committed to their own careers but also to pulling other singers up with them as they climbed.

It might make sense for singers who are trying to navigate the changing opera world to pay close attention to how seriously company founders take their roles as job creators. “For operas where I am cast in a role, we have evolved to double casting the role to provide an opportunity to another deserving performer,” says Katherine Bergman, founder of Main Street Opera Company, when asked about double casting to compensate for singing a lead herself.
Opera companies that also take their job as job creators seriously can focus on a few other things that OperaModa has found successful. Hiring ensemble casts allows you to showcase many performers at once. Taking smaller roles here and there allows you to open as many leads as possible. This can be scary, especially when those singers are younger than you and have strong voices. But if you put things in perspective, casting new voices allows people to see you as an industry mover, as opposed to just someone who is growing your own career.

Why should you do this when it’s already an excruciating amount of work just to get the show on the stage? The answer is simple: it pays off. To say thanks for opportunities, grateful singers have over the years passed me wonderful gigs that they have not been able to do.

I’ve even found that it’s best, when casting, not to even be in the audition room. Rather than judge the quality of my colleagues’ voices, some of whom I trained with and most of whom are at my level, I would rather they audition in a room that contains a show director and musical director who have cast many shows and developed reputations for fair and clear casting.

But how do you solve the issue of perceived quality when casting yourself? That’s the biggest challenge. I find that the key, as a self-casting singer, is to be realistic and let the industry and audience speak for you. Bradley Schuller, a tenor who is also the founder of Verismo Opera, agrees. “I think from my perspective, I need to make sure that I have enough ‘street cred’ in that I would want to legitimately be able to sing the role,” he says. “I would want to have enough other gigs lined up with other companies.”

Street cred is important—can you perform well at any time, whether it is in your own show or someone else’s? Audience reaction and loyalty is also a factor. At OperaModa, our audience is large and loyal, and we have many corporations and venues that hire us regularly, including many of the local chapters of the Lyric Opera of Chicago. The buyer is the ultimate judge. When applying for a singer-run company, take this into account. Are the singers that run it working for other companies too? Does their company have a strong and loyal audience? This can help you decide if it’s worth pursuing an audition.

But that’s a smaller point compared to this one: singers that are not applying for singer-run companies might be missing a huge opportunity. The opera world is not what it once was. Since the recession, many companies have folded, and those that are left are cutting back severely on funding and projects. Opera is becoming a museum profession.

These days, all of us have to gather our fan base one by one. If that’s the reality, why gather fans under the name of an opera company instead of just your own name? There’s a huge amount of work involved in building either, and it might lead to double bang for your buck in terms of energy expenditures.

Singers working in singer-run companies have an amazing chance to learn about all aspects of starting and running an organization, from incorporation to branding to PR to grant writing to hiring. I’m personally shocked to find that so few opera schools actually teach entrepreneurial skills. There’s an industry-wide problem when scores of singers are being released into a world that will hire just 1 percent of them. If we can’t put them into a world that has jobs for them, shouldn’t we be training them to create jobs as well?

An industry is only as strong as its job creators. If you are not supporting impresarios, then your performance degree might as well be wallpaper. It comes down to respect. Singers casting themselves need to respect the problems within the current opera industry and cast accordingly with the right casting team, by choosing large ensemble pieces—not casting themselves as the lead in every role and double-casting whenever possible. These are not mandatory things, of course, but putting them into practice makes you a real job creator and a real advocate for others in the industry.

From the applicant side, a healthy respect needs to be maintained for job creators. If you’re happy about the industry’s job levels being where they are, then go ahead and complain. But if you’re not (and most of us are not), then you need to get behind any job creator and push—even join forces with them—regardless of whether or not that person is casting themselves. Let the industry and audience gauge their quality, and just focus on being professional and examining where a role with them can bring your personal brand.

We have too few opportunities in opera to be divided and fighting among ourselves. Let’s focus on uniting to move ahead and celebrating our entrepreneurs.

Genevieve Thiers is the founder of Sittercity.com, OperaModa.com, and several other companies. She is an obsessive job creator who has created over a million jobs in caregiving and hundreds of jobs for opera singers. She works at 1871 in Chicago and is an active professional singer in the area. She is a 2004 master in opera performance from Northwestern University and a student of Judy Haddon. She has won over 20 entrepreneurial and singing awards, and her companies have been on Ellen, The View, The TODAY Show, and CNN, as well as in TIME and in many other media outlets. See more about her at www.genevievethiers.com.