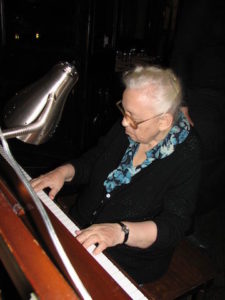 On January 23, 2019, a bright light went out in the world when the beloved pianist of Caffè Taci, Iya Valentinovna Fedotova, passed away. It was just a week before her birthday celebration—although her exact age was a mystery. A quick Google search of her name and you will find pictures of her spanning the 23 years that she served as pianist for the hundreds of opera singers who passed through the Taci doors. In almost every photograph, she is seated at the piano in the corner with captions underneath marveling at her supposed age—ranging anywhere from 70 to 96.

I was a regular singer at Taci from roughly 1999 to 2009. During those 10 years, I can recall celebrating her 80th birthday at least twice. Leopoldo Mucci, the founder of Taci and a fixture in a subculture of New York nightlife, put her at 86 at the time of her passing.

Mucci, an Italian bon vivant, and Fedotova, a widow from Siberia, seemed an unlikely business duo, but they shared a love of opera and balanced each other out perfectly.

Mucci told me about their first meeting recently as we reminisced. In July of 1995, the original Caffè Taci had just opened on Broadway and 110th Street. On July 23rd, an upright piano was delivered to the restaurant. Mucci and one of his friends, a Russian gentleman named Vassily, were discussing a party.

Vassily wanted to have a big celebration in two days, complete with live music. Mucci had eager singers from the nearby conservatories but he did not have a pianist. Vassily told him not to worry, that he knew a wonderful, 70-year-old Russian pianist. “You know, I have an accent, and Vassily, he had a thick Russian accent—and actually I thought that he said a 17-year-old pianist,” Mucci recalls. “So, I told him OK and to send her over to play.”

Two days later, he got the shock of his life when Fedotova walked into his restaurant. “Here comes this little, old lady with her little handbag,” Mucci says. “She came in, and I thought she was a customer. She could say only one word in English, and it was ‘pianist.’” That day was July 25, 1995.

Fedotova would return to Caffè Taci every week, following Mucci, the singers, and the music to all three locations throughout the next 23 years. Caffè Taci is now located in the upstairs portion of the Papillon Bistro and Bar on East 54th Street.

In the beginning, Mucci arranged for a friend of his at Columbia University to come once a week to teach Fedotova to speak English. She obliged, but after six months said, “No more. I speak English now. No more lessons.” She remained a woman of few words but utilized them in a way that allowed her razor-sharp wit to shine through. After several years, she gained citizenship in the United States.

“She was probably 75 by this point,” Mucci says, “and I told her to watch out. That now that she was a citizen, all of the young waiters in the restaurant would want to marry her. She stayed quiet for a moment and then grinned saying, ‘OK. Five thousand dollars, but no sex.’ She had a wonderful sense of humor!”

In the first 10 years of its existence, Caffè Taci was a unique cultural fixture near Columbia University on Manhattan’s Upper West Side. Its location made it a prime spot for opera students at Manhattan School of Music, Juilliard, and Mannes School of Music to try out new arias and gain performance experience.

In the beginning, young singers would come and sing for their supper—no questions asked. Caffè Taci had singing every Wednesday, Friday, and Saturday. All singers who showed up to sing would be fed. A few would be hired and paid to sing. These were the Taci regulars. Many went on to have successful opera careers.

As popularity grew, more established singers would visit and perform. Current and retired stars from the Metropolitan Opera would mingle with nervous undergraduates, singing from the same, small platform stage in the same evening. Every now and then, agents or conductors would come in to listen.

To Fedotova, none of this made a difference. Her eyes would look up and fixate on you as you approached her side, trying to gauge what you were about to place in front of her. “OK, no worries,” Fedotova would say. “You are very good. You will sing?”

For all involved, performing at Taci provided the ultimate, albeit unconventional, training ground. There were no programs, no rehearsals and, save for the Act I finale when all the hired singers would sing “O sole mio” before passing a small basket around to collect money, no rules to speak of. If you were hired to sing that night, you were expected to sing anywhere between six and a dozen arias, depending on how many extra singers showed up. You did not follow the standard conservatory practice of learning only those arias suitable to your young voice. You learned all the most popular arias, and there was a good chance that you would get up to perform them between bites, halfway through eating your dinner.

At the start of an evening, a cardboard box filled with anthologies and a few complete scores was pulled out of a back room. A singer would select a piece and Fedotova would start to play. At less than five feet tall, her hair always back in a bun, and her shoulders grown into a perpetual slump from playing for so many years, she was a force to be reckoned with. The shortest evenings were three hours long, but it wasn’t uncommon to extend into the wee hours of the morning. Fedotova never complained.

As soprano Arianna Zukerman put it: “When I was a young singer, auditioning around New York City, Caffè Taci was a godsend. Singing there was a relief from the daily grind of trying to prove myself. And it was a safe space to try out new arias.

“Iya was the heartbeat of it all. She was willing to try any piece we put in front of her. Her kindness was infectious and her ability uncanny. She helped so many of us remember that singing wasn’t only about getting the job, but rather making music—deeply felt and intimately expressed. She will be so missed.”

After her passing, I had the opportunity to catch up with other singers from the years of Taci past. We shared our stories and the little things that we held dear about a woman who had remained so constant in our fast-paced lives. What we discovered is that she treated us all as individual artists and took care to make sure that we knew she was there for us. Taci’s longest-running veterans, sopranos Noelle Barbera and Tiffany Abban, recall their individual routines with her.

“As I was putting new music in my binder,” Barbera says, “I was thinking about the way she used to fold up the corner of the music to make it easier to turn the pages, her little dry hands, her bandaged fingers . . . she would do it each time before I’d sing, making note as she did of any repeats or cuts in the music, saying something in Russian that sounded like ‘tak.’ This little ritual repeated several times a night for more than 20 years.”

“I first sang with her when I was young and she was already old,” Abban remembers. “She sat stooped at the piano for five or six hours, the experience flowing from her heavy fingertips. Back then, she played everything. Notes were omitted, but tempo was always strictly obeyed.

“As she got older, her eyes dimmed, and her powers diminished. She and I had a weekly repertoire that was within her hands, and I thought of her as a dear grandmother to coddle and love. Every now and then she snapped at me if she thought I had made a mistake and I absorbed her ill temper because she was old and uncomfortable and had seen better days.

“Whenever anyone gave her flowers, and they did often, she regifted them to me at the end of the night. She would have preferred cash. My favorite memories of her are the times I shared her bench and we sang something unpracticed together. Sometimes if the room was loud, we made music for each other, simply for the joy of it.”

For my part, I remember Fedotova and her ability to create and offer catharsis through her playing. She had quite a few pieces memorized and, when I would walk up without a score, she would take my hands as I crouched down to meet her on the bench, trying to figure out what I needed to sing. Then, her eyes sparkling, she would smile and say, “You will? You will sing ‘La Vie en rose’?”

“Can’t Help Lovin’ Dat Man” was simply referred to as “da-Dah-da-Dah-dah” between us. She loved that our birthdays were one week apart and, throughout the years, as January would come to an end, she would often say goodnight by pulling me down to her and kissing me on the cheek saying, “We are Aquarius! Very good.” And then she would giggle like a much younger person.

Fedotova continued to touch the lives of the young singers she played for right up until the end. As current Taci tenor Juan del Bosco says, “She had this spirit that as soon as she entered a room, it made you smile. She played wonderfully and with all of her heart. I’ve only been singing at Taci for four years, but that was enough for her to know my repertoire by memory. I know she’s keeping an eye on all of us from a beautiful place.”

Fedotova lived a life of strict routine. She came to play the piano. Her music provided opportunity, stability, and joy for the many singers and customers who came to hear her music. The end of her life marks the end of an era.

Jennifer Cresswell is a soprano and teacher currently pursuing her doctorate at the University of Michigan. As an artist, she is dedicated to using her voice to tell women’s stories and blurring the lines between tradition and creativity. Recent performances include Der Trommler in Der Kaiser von Atlantis, Magda Sorel in The Consul, and Hannah After in Laura Kaminsky’s As One.