This fall, Canadian Soprano Othalie Graham will make her role debut as Lady Macbeth at Toledo Opera and Opera Carolina.

Toledo Opera’s Executive Director Suzanne Rorick says “Lady Macbeth struggles with ambitions not befitting to a woman of her times, and this is an integral part of her descent into murder and madness.”

Graham feels that her own struggles will help her bring dimension to the role.  The loss of her father to cancer at the age of 25 was the end of an important chapter. Her childhood prince charming and love of her life was taken from her and her mother, leaving her with a “hardened heart” and with a new perspective on life.

Graham says, “My whole life was, and is still, guided by my father. I am so unbelievably determined to make sure that his legacy lives on through my success. This drives me every single waking second of my life.  Not having him is the most horrific thing of my life, but having that inner fortitude that was instilled in me from him, and then, from not having him, motivates me to do things that some other people won’t do.”

This gave her the courage to tackle a severe binge eating disorder. Graham weighed almost 400 pounds and managed to lose about half of her body weight due to her courage and determination to live a healthy life.

“It’s important to surround yourself with people whom you can trust and who have your best interest at heart and who lift you up when times get tough. For me, my mentor Christopher Schuman and my vocal coach Jeffrey Miller are invaluable to my success.” 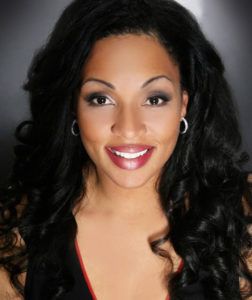 Today, Graham tries to do the same for others.  “‘My father taught me to be kind and encouraging to every person I encounter because everyone is struggling with something. I believe the world would be a better place if we all understood this.”

Graham has received tremendous acclaim for her powerful and beautiful voice. Toledo Opera’s Director of Production, James Norman said, “The role of Lady Macbeth is challenging from both a singing and acting perspective, and Othalie’s unparalleled acting skills and gorgeous voice will enable her to be a captivating and memorable Lady Macbeth.” Graham previously sang for Toledo Opera in Aida, where she performed with Mark Rucker who will play Macbeth to her Lady Macbeth. Graham is excited to perform with Mark Rucker again, calling him “a legendary singer and an incredible colleague.”

Graham is also excited to work again with Maestro James Meena, the Artistic Advisor of Toledo Opera and Artistic Director of Opera Carolina.

“I am very excited to have the opportunity to sing with Maestro Jim Meena again. He is such an incredible conductor who I met when I sang Turandot with Arizona Opera. I was shocked when he walked into the first rehearsal and conducted from memory. He is truly a singer’s conductor and creating this role with him is such a gift,” says Graham.

Although opera was her destiny, Graham did not realize that until college. She was a biology student at York University in Canada when she left to study voice with Lois McDonnall.

“I basically went from her home studio unable to read music well, to The Academy of Vocal Arts in Philadelphia.  I did not attend an undergraduate music program, so AVA was very overwhelming for me for the first couple years.  With determination, perseverance and with the help of my inner circle of friends, I was able to overcome it to become confident and successful.”  Graham stayed in the United States after graduating from the Academy of Vocal Arts to continue to pursue her career in addition to meeting and marrying her husband.

Graham considers her voice and career a gift, one that comes with responsibility. “I’m a very spiritual person, and I believe that when you are given a gift, that is your form of prayer by performing and working on the gift.”

Verdi’s Macbeth will be performed with Toledo Opera at the Valentine Theatre in Toledo, Ohio on October 4th & 6th, and again with Opera Carolina at the Belk Theatre on November  7, 9, and 10. Tickets available at toledoopera.org and operacarolina.org.

Becky Gannon shares her love of opera as the marketing and social media guru for Toledo Opera. She especially loves helping artists learn to promote themselves on social media.  Becky is also a former attorney and recent empty nester who lives in Toledo Ohio with her husband Mike and her super fluffy (and slightly spoiled) dog Ziggy.