Mildred Miller’s boisterous career has truly come full circle. Read about her early work in Europe that led to hundreds of Met performances and how all that experience is now impacting the lives of university students. 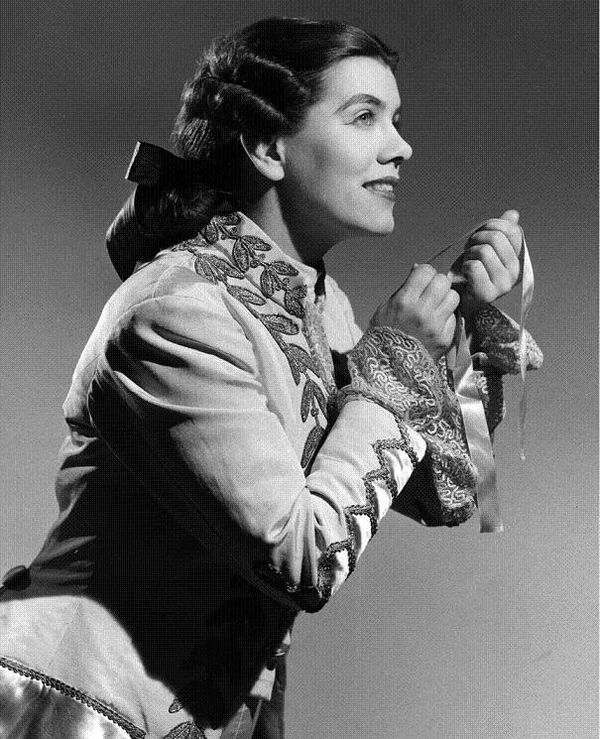 She’s outspoken, funny, and sharp as a tack. At 95, she still teaches voice at Carnegie Mellon University School of Music, and the word “retirement” is foreign to her. “I came in through the back door,” she laughs. “Mimi Lerner became ill and asked me to take over for her students. So I did, but then she became ill again. Now they won’t let me retire!”

The head of the department asked her point blank: “What are you going to do? You got plans?” She chuckles lightly, “I think I’ll probably carry on until I fall over. I really enjoy teaching.”

But before instructing countless students in operatic roles and German Lieder, Miller was one of the most popular mezzo-sopranos on the Metropolitan Opera roster from her debut in 1951 until her last performance in 1974, turning in 338 performances.

Born Mildred Müller in Ohio to German immigrants from Stuttgart in 1924, it was the Met’s Rudolf Bing who encouraged her to change her last name to Miller due to anti-German sentiment following World War II.

“I lived through the Depression and the war,” she recalls. She mentions the madness of Hitler that propelled many talented German Jews to America. “As far as my career was concerned, I remember so many outstanding musicians from Germany coming to the United States.

“They helped nurture us. I am a product of that. When I was at the Met in the 50s, practically all of the coaches were immigrants from Germany, and a lot of them were friends of Rudolf Bing. They were good, outstanding people.”

But before Miller would make her Met debut, she had attended the Cleveland Institute of Music, and upon her graduation in 1946, she entered the New England Conservatory. It was while there that she met legendary conductor and opera impresario Boris Goldovsky. “He got me financial assistance to come to Boston for my graduate studies,” she says. She credits Goldovsky for starting her off so well in a fledgling career. “I am everything he stood for, and what he stood for was acting with singing—really, theatre.”

Goldovsky’s founding of the New England Opera Theater in 1945 provided a huge training ground and steppingstone for Miller. “With him, I got all this training,” she says. “I did 25 performances of Cherubino before I did it in Europe and the Met.

“I did Carmen. When you can say you’ve done Carmen, they look at you, they’re interested. I was able to go to Germany and sit down and tell them and show them reviews. That’s what anybody who wants to sing at the Met has to have, either European experience or lots of regional experience.”

But before she left for Germany, where she would be courted by Bing, she made a substantial debut at Tanglewood in 1946. The conductor was Leonard Bernstein. “I made my debut in Peter Grimes as one of the nieces,” she says. “The other niece was Phyllis Curtin.

“That was a young Leonard Bernstein. I don’t know if he’d ever conducted an opera before! All I know is that he conducted with his fists, trying to get enough power out of us, and we were young kids. We knew he was something else.

“The thing I remember so much was his rhythmic knowledge—the intricate rhythms he could conduct. It was fascinating. I remember he would have these jazz sessions right after Peter Grimes. Everyone would come down and blow their horns at these jam sessions, and he would conduct.”

After earning her artist diploma from the New England Conservatory in 1948, she won the prestigious Frank Huntington Beebe Fund for Musicians fellowship, which allowed her to return to Stuttgart and join the roster of the Staatsoper Stuttgart. Many important debuts followed, including the Bavarian State Opera, Vienna State Opera, and the Edinburgh Festival as well as Glyndebourne.

Her initial auditions for Bing were not accomplished without complications, however. “The first time I sang for him was in Munich,” she says. “He offered me some ridiculous roles, and I said I’d be much better use if you let me stay here in Europe and get some experience.”

Bing asked to hear her a week later. “We were in Düsseldorf. I had to turn him down because I was pregnant,” she remembers. “I thought that was the end of the world. So I joined my husband Wesley Posvar for his last year at Oxford where he was a Rhodes Scholar.

“Well, I was sure that was the end of me. But in April another telegram came: ‘How soon can you sing for me again?’ How about that! That was just so incredible. So I quickly went over to Germany and brushed up with my teacher.

“It was before the Met went on tour [that] I flew over. Bing paid for my flight and accommodation in New York. I got onstage at the appointed time and stood on the stage for one hour before he came to hear me sing for a third time! The reason he wanted to hear me on the Met stage, and that was the old opera house, [was that] he had gotten burned a couple times. Voices that he heard in the room that sounded enormous did not project well in the old house.

“It had peculiar acoustics. We who were singing onstage could hardly hear ourselves, [so] you really felt something was wrong and started to push, but the voice did project out. In the new auditorium we think we sound great; we hear ourselves onstage but we’re not always carrying, projecting as well as we think. So, he never hired anybody again without hearing them on the opera stage. Probably Callas was the exception.”

Consequently, Miller made an auspicious Met debut in November 1951 as Cherubino in Le nozze di Figaro. A stellar cast included Cesare Siepi, Victoria de los Ángeles, and a young Roberta Peters. The New York Times was laudatory: “The young newcomer had everything in her favor, including a handsome magnetic stage presence; a fine, fresh voice expertly produced; and pronounced histrionic ability.”

Still, it proved challenging having a family and a career, and when she became pregnant with her third child, Bing chided her: “Are you going to raise children or are you going to sing opera?” Luckily, she was able to do both.

“It was difficult,” Miller shares. “Even a career, in itself, is kind of lonely. You’re off by yourself singing for an audience that doesn’t care about your personal life, just what you can produce. The last 10 years of my career were the easiest because my mother came to live with us. One needs the support of an entire family.”

And while pants roles were her specialty (Der Rosenkavalier’s Octavian was her favorite role), Miller’s repertoire included the Composer (Ariadne auf Naxos), Suzuki (Madama Butterfly), Prince Orlofsky (Die Fledermaus), Rosina (The Barber of Seville), Meg Page (Falstaff), and Nicklausse (The Tales of Hoffmann). “Octavian was my passion and obsession,” she says. “It was vocally so much more rewarding and . . . it was much higher. It was almost written like a soprano but comfortable for a mezzo.

“I always wanted to do Butterfly, so badly! I ended up doing close to 100 Suzukis. I did it with Tebaldi, Price, Albanese, Dorothy Kirsten. And by the way, I always felt Dorothy and I put on the biggest show of all.

“We had those people just crying in the aisles. She was wonderful to work with. She was made of steel. I remember after her absence she came back and sang Butterfly and fell right on her back during Butterfly’s entrance. She got right up, kept singing, and took the high D-flat.”

Still, the old and new Met were not the only houses she sang in. There were important engagements in Europe, of course, as well as at San Francisco Opera, Lyric Opera of Chicago, and Carnegie Hall, to name a few. In between, she appeared on The Bell Telephone Hour, The Ed Sullivan Show, and The Voice of Firestone.

But today she is busy teaching a new generation of singers. “Today the singers expect so much from their undergraduate level; they’re very impatient,” she relates. For Miller, in her own fledgling college days, her teachers “were not really strong on vocal technique.”

While at the Cleveland Institute of Music, she had a teacher who really made a point to introduce her “to German Lieder, French songs, and contemporary stuff. As a matter of fact, I did not have any opera or arias until I was done with my undergraduate work. I ended up singing almost more recitals than opera, and now I’m teaching it.”

Tenor Tony Villecco is an arts writer for the Binghamton Press and Broome Arts Mirror. A student of soprano Virginia Zeani, his first book, Silent Stars Speak, was released to critical acclaim by McFarland in 2001. His articles have appeared in Classical Singer and Films of the Golden Age.