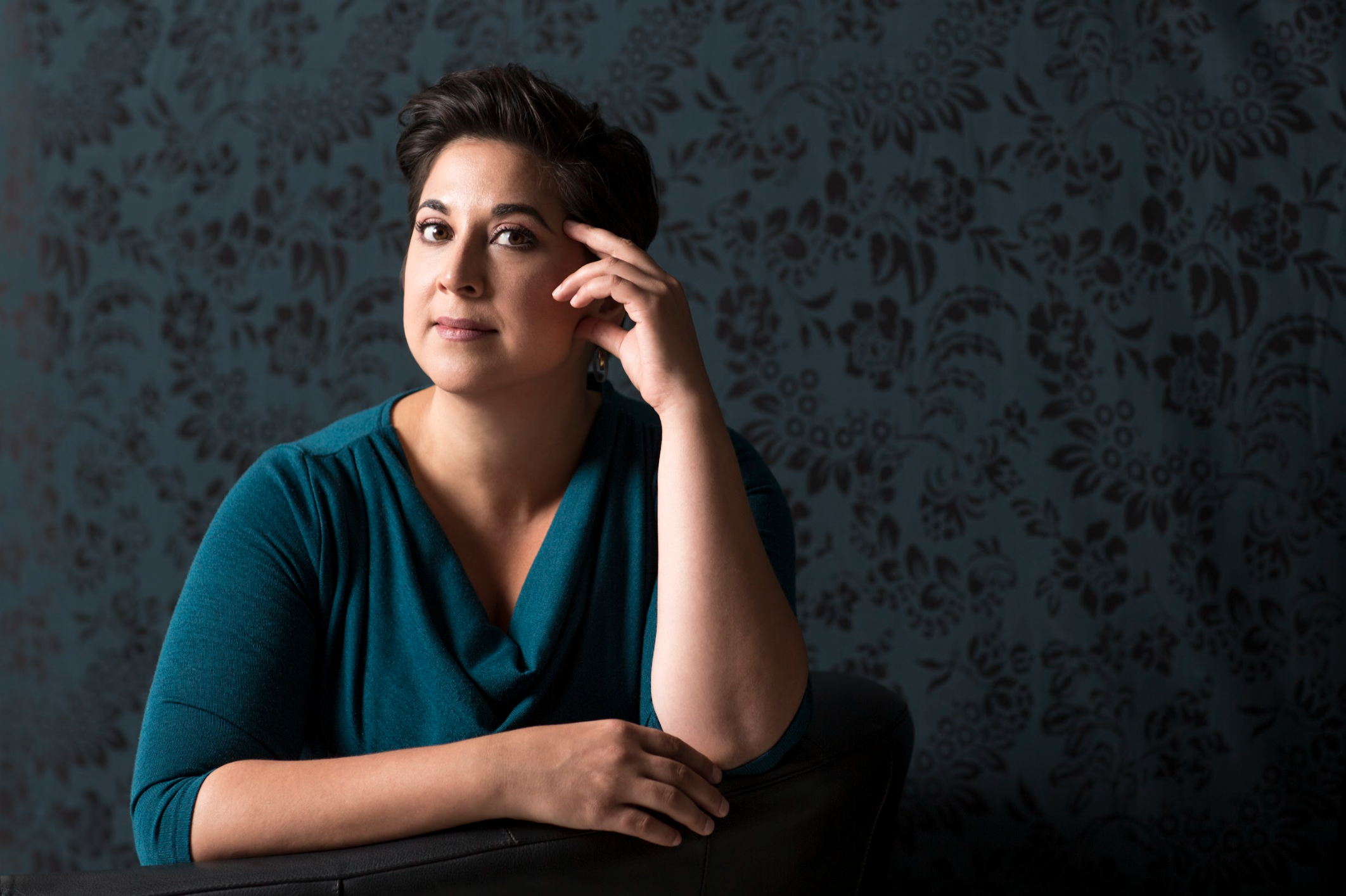 Kamala Sankaram is both a singer and a composer, celebrated in the worlds of contemporary opera and experimental music. Read on to learn about her work, which exists at the intersection of art and technology, as well the integration of cultures influencing her creative output.

Acclaimed composer and singer Kamala Sankaram is truly an artist of our times. Her stunningly original operas and compositions adopt the latest technologies, reflecting life in today’s fast-paced, digitally reliant world while also paying homage to her biracial heritage through highly innovative music that integrates the diverse cultural forms of her background.

This month, her short opera Rise will have its world premiere at The Kennedy Center in honor of the Center’s 50th anniversary season.

Did you always want to be a composer?

I didn’t even know what a composer was, but I always wrote songs. One of the family stories is that I made my music debut at age 2. I wrote a song called “Flutter By, Butterfly.” My first forays into composition were arranging for my choir at school and writing little pop songs. I was thinking more of musical theater at that point. Coming to New York and learning more about opera led to composing that was more like opera than musical theater. 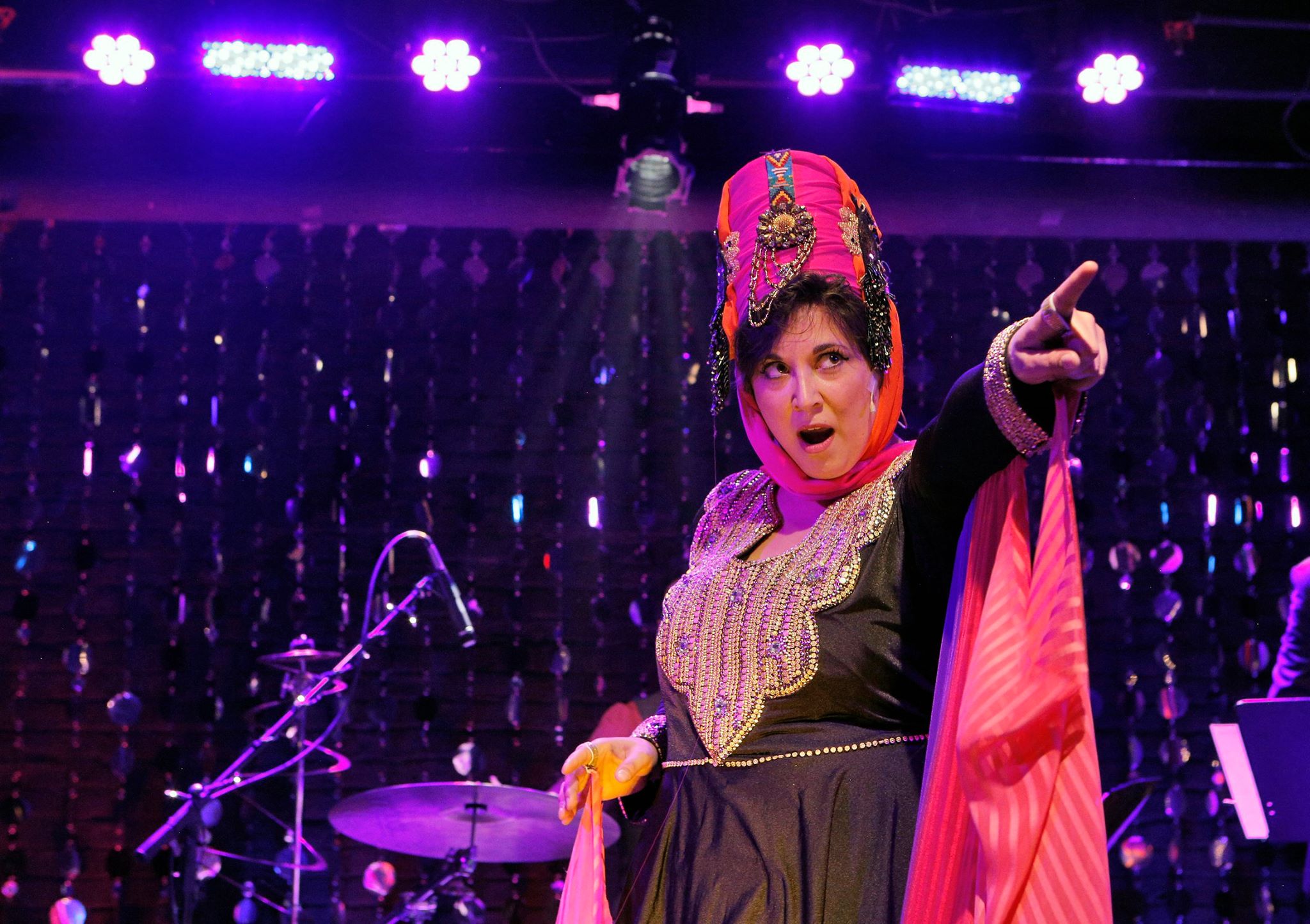 Kamala Sankaram as Herself (!) in Bombay Rickey Meets the Psychology of Desire, PROTOTYPE Festival, 2016.

You are also a coloratura soprano and you often perform in your own works. Do you ever challenge yourself by writing difficult vocal music for yourself?

I’ve realized that I have composer brain and singer brain, and they don’t always talk to each other. There have been many times when I’ve written something and sang it and said, “Oh, what did I do?” At least I can change it and make it more comfortable. A lot of singers are not used to working with living composers, so I’ve encountered hesitancy from people to tell me that something doesn’t feel right when I always ask, “Does this feel good in your voice? What can I do to make it feel better?” But that’s how it started: composers were writing for particular singers and making things fit their voices, so I think we should still be doing that. 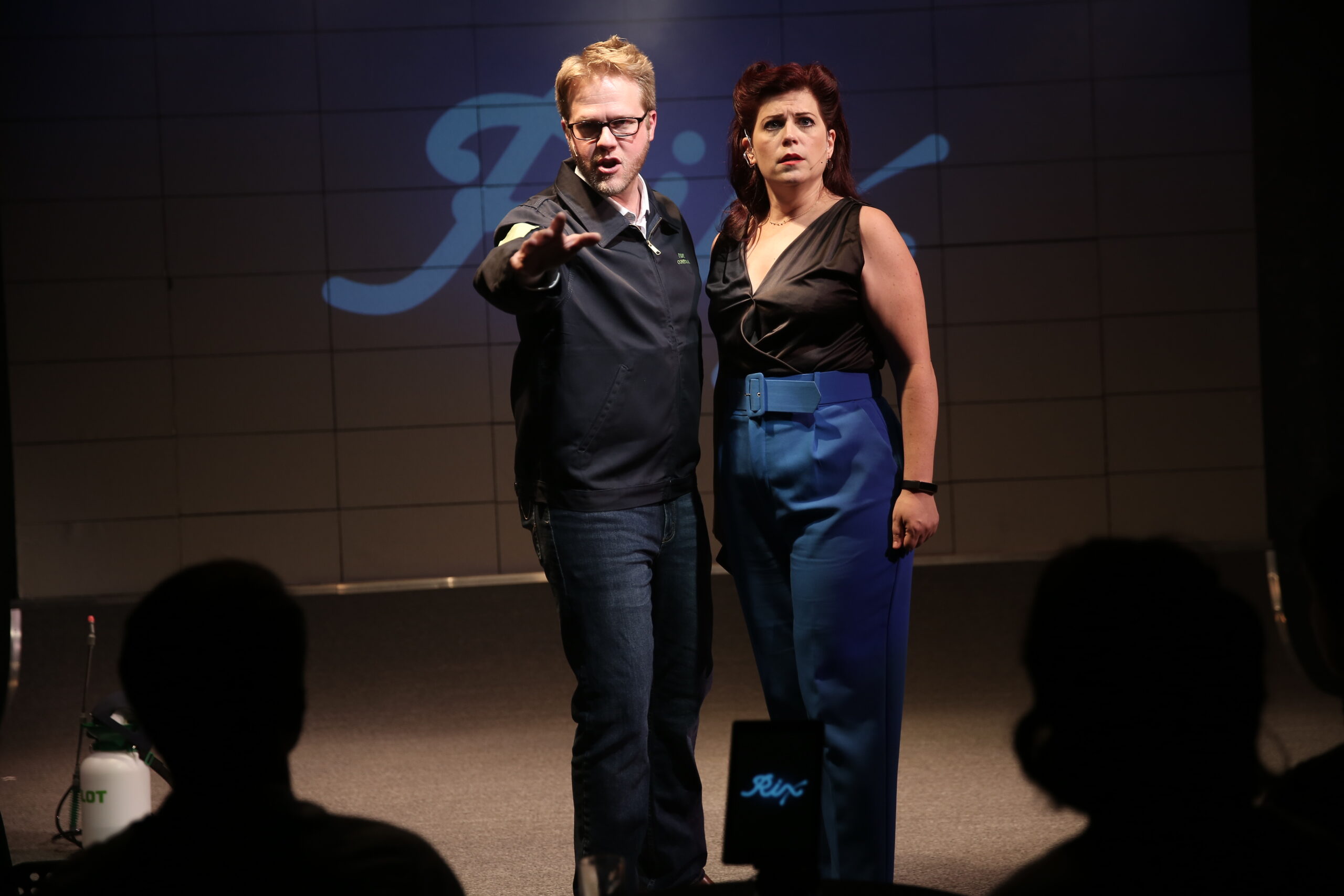 Blythe Gaissert as Dorothy and Brandon Snook as Ethan in Looking at You, Opera on Top/ HERE Arts Center, 2019.

You integrate emerging technologies in your work. How important is that for you?

I have always been interested in technology. Opera has historically always been an early adopter of technology. The opera field had the first forms of electric lighting systems, then it has really embraced video projection—so opera and technology go together very well because you have to use all of the tools at your disposal to create worlds on stage.

For me, personally, my interest in technology is also about how it has changed society and how integrated it is into society. In order to tell stories that reflect what it’s like to be a person today, we can’t avoid technology, because it’s ubiquitous. It also increases access. If you put things online, all of a sudden your audiences increase exponentially in a way that hasn’t been possible before.

To give an example: the virtual reality (VR) piece I did with Opera on Tap got something like 14,000 viewers in the first month. If I were to make a similar, independently produced black-box type of opera in New York City in a house with 100 seats, I would have, say, six performances: that’s 600 people seeing it versus 14,000. The ability to get it out to so many people who may not be able to go to an opera house is really exciting. 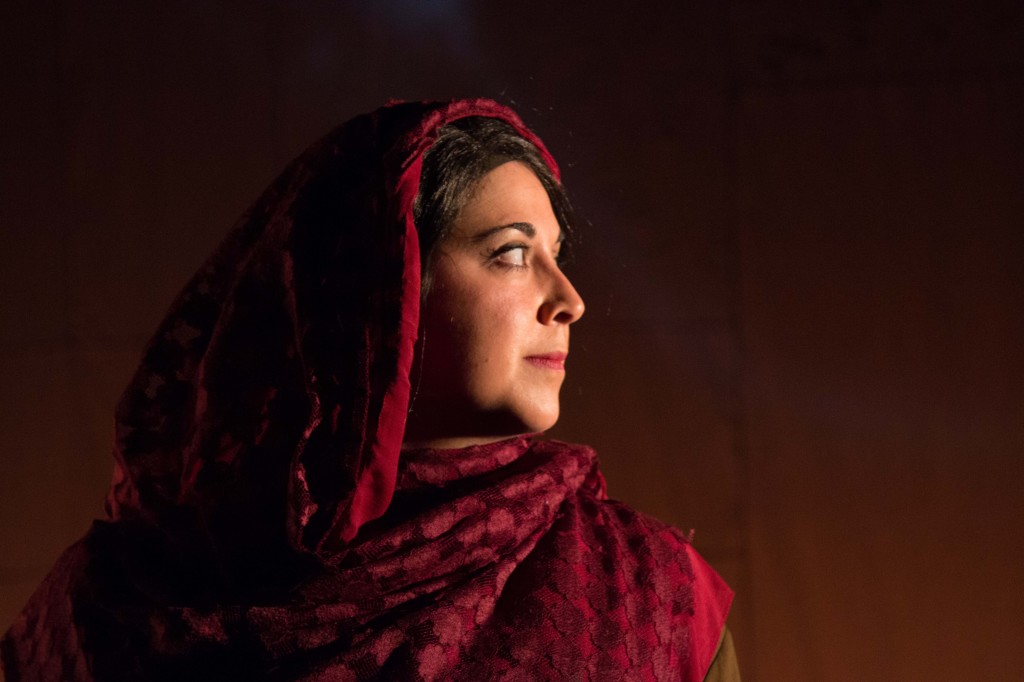 How did the VR opera creative process happen?

That project came from Cari Ann Shim Sham*, an artist and a professor at NYU. It was originally meant to be done with the ITP (Interactive Technology Program) at NYU, but Anne Hiatt (the general director of Opera on Tap), Cari Ann, and I realized that it was a larger scope of a project than we’ve been talking about with ITP, so we found a start-up company called Light Sail VR in L.A. At that point in time, you had a lot of games—you didn’t have many narrative VR experiences and you certainly didn’t have something based in music. It was a true collaboration between everybody involved in the project, including the librettist, Jerre Dye. 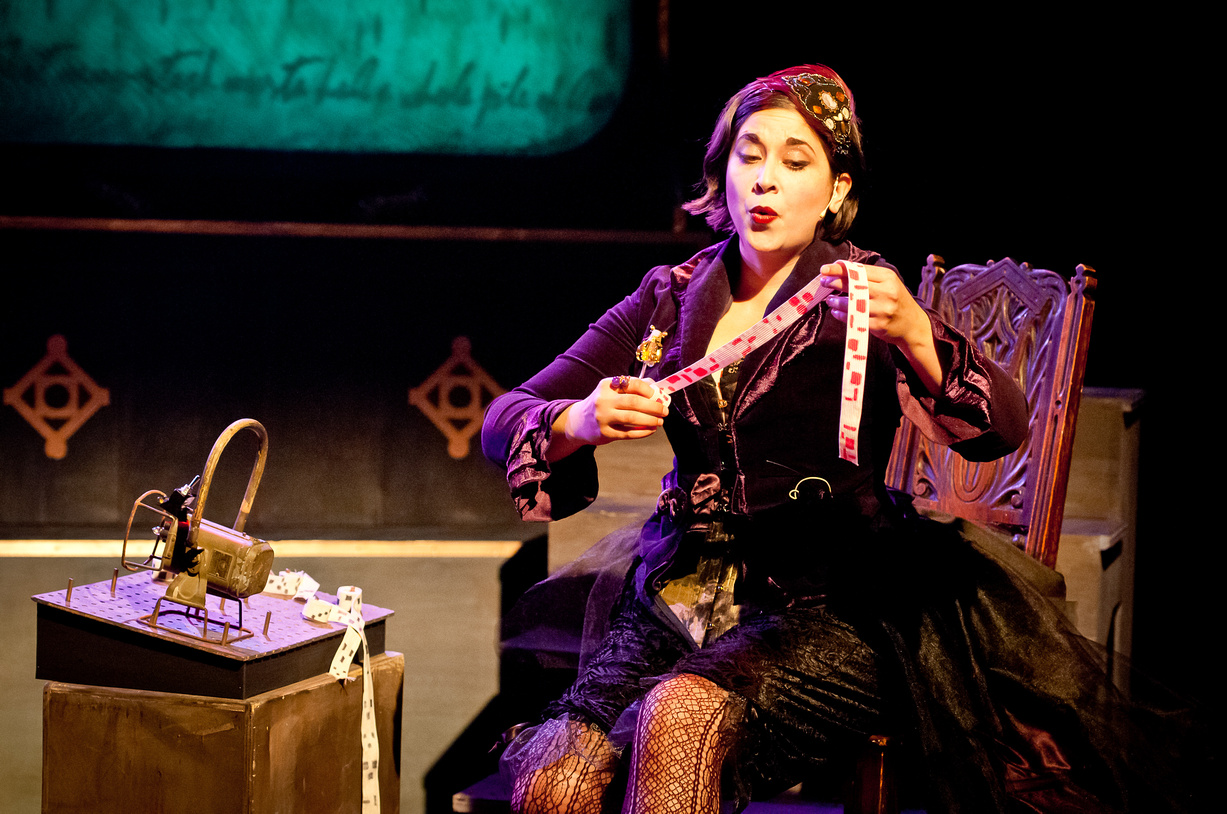 Your recent genre-defying hit, Looking at You, featured live data mining of the audience and a chorus of 25 singing tablet computers. Tell us more.

We call Looking at You a techno-noir opera about surveillance capitalism, which is again about this pervasive influence of technology in our lives—but, in this case, in the form of social media and the algorithms that drive it. As we’ve seen, these algorithms are making decisions all the time that impact us, our civic discourse and, therefore, our democracy. So, this show was specifically about how algorithms gather information about us and make decisions about us.

Yeah, sadly. Part of what I wanted to do was to create this musical metaphor about the difference between life in real life versus life online, so there had to be this heavy electronic component. I wanted the chorus to be computers instead of people, so the tablet computers start off as these personal digital assistants that are like the old Clippy from Microsoft, but they sing. Part way through the show, this algorithm is created, gathering all of the data about people in the audience, and the algorithm takes over the tablets and is singing.

In honor of the Kennedy Center’s 50th anniversary season, you composed an opera that will premiere this month. Please tell us about it.

The evening is called Written in Stone and it features four commissions of short operas. Each of the four pieces is inspired by a monument in Washington D.C. because the Kennedy Center is a monument, so it’s engaging with the idea of what is memorialized and why.

I collaborated with A.M. Homes, a really celebrated fiction writer. The monument for our short opera was The Portrait Monument, which was dedicated in 1921 in commemoration of the women’s suffrage movement. It’s the only sculpture of women that’s in the Capitol building and has three busts: Lucretia Mott, Elizabeth Cady Stanton, and Susan B. Anthony.

This monument was revealed after women got the right to vote and then immediately moved down into the basement of the Capitol, where it sat until the 1990s when a women’s rights group raised enough money to have it brought back up to the Rotunda. Our piece is inspired by this monument and engages with this idea of why there are so few women in terms of who gets memorialized. 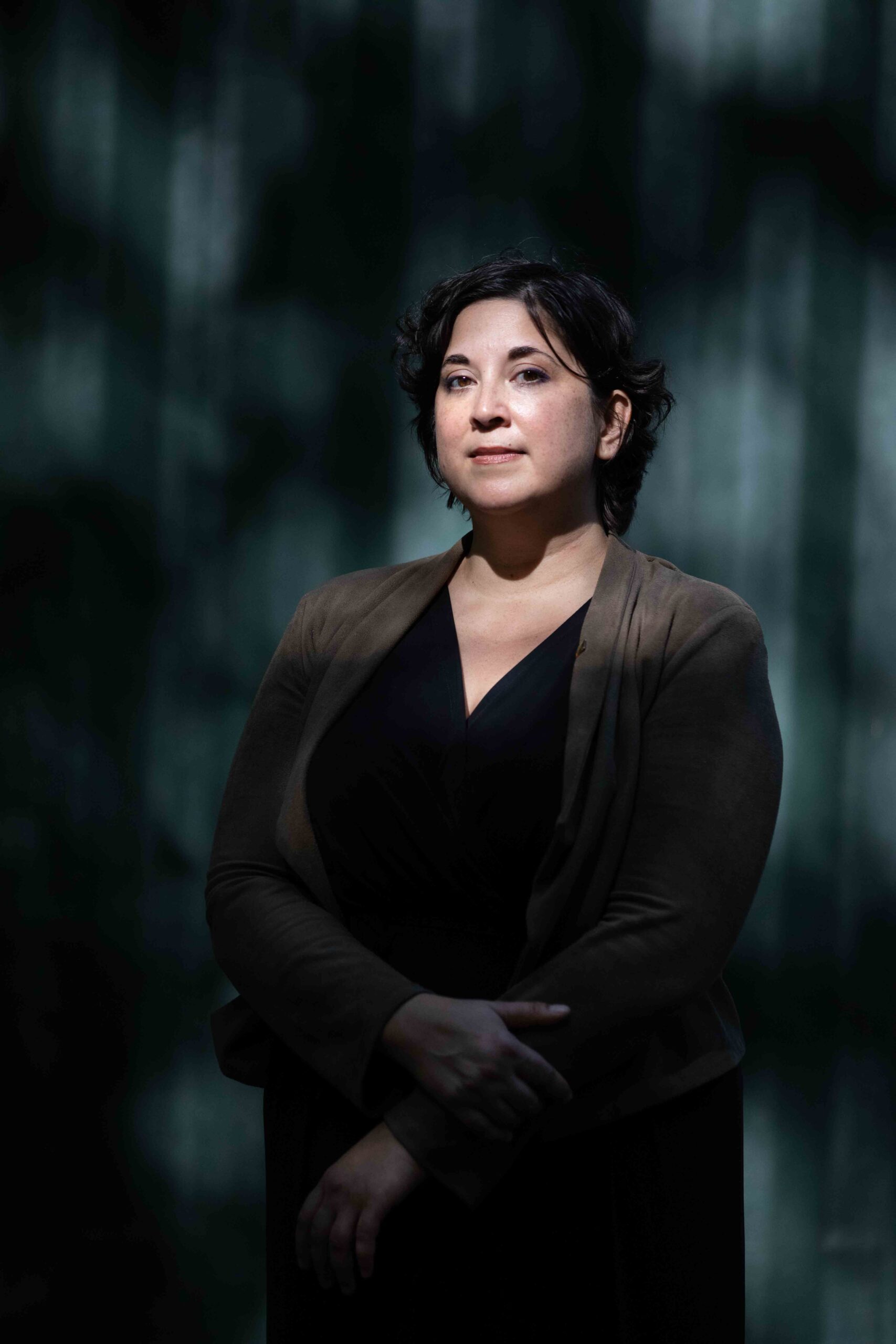 Taking on patriarchal society is a constant theme in your work…

As you know, especially for us high-voiced sopranos, when you dig into the characters, it feels like they’re not representative of us as persons. I wanted to start by writing these characters who had more depth to them, and that just so happened to make them more feminist.

Just the fact of having somebody who doesn’t talk about getting married or has her own agenda that might not have to do with men at all, that’s immediately considered feminist, so does that mean that to let somebody just be a person is a political statement? I hope we get to a place where it isn’t, but it is still.

You incorporate elements of your Indian heritage in your music. How does this integration of cultures merge in your artistic vision?

Well, I am a biracial person. My mom is white American, and my dad is from India. A lot of the way that I move through the world and think is influenced by that need to have one foot in each culture. It’s a constant balancing.

When I went to India, my grandfather learned that I was very interested in European classical music. He gave me a sitar and told me I should learn about Indian classical music also. I’ve done work using Hindustani classical music, asking, “How do I take these two sides of my heritage and try to find a commonality between them? “

That’s a question in a lot of my work in general: How do you find things that are different and see what the common ground is?

What advice do you have for those pursuing a career as a composer?

Listen voraciously to lots of things, study scores, go to concerts, meet people, find your people. The Internet can be a double-edged sword in that there’s so much music out there. You can find the people who want to hear what you are offering, but you have to figure out what is uniquely you first of all—and that can be really hard to do, especially when you’re young because you may want to sound like composers you’ve already heard.

What would you say to a young singer?

What the pandemic has demonstrated is that performers need to be given more agency. During this time, everyone was asked to be their own videographer, audio engineer, lighting designer, and costume designer—and they did it and came up with things that were really beautiful. I feel that one of the problems that opera has faced is that we’ve moved away from performers as equal collaborators to performers as purely interpreters of what’s on the page, and hopefully we can go back to something that utilizes more of the entire artistry in a performer.

As a singer, it’s important to really allow yourself flexibility. The singers I know who work the most are those who do the canon but also do contemporary opera and are interested in crossover and musical theater. We’ve moved past the days of saying, “I’m only a Puccini soprano,” and I think that’s more fun.

You are Co-Artistic Director of Experiments in Opera, a New York-based company that believes in “rewriting the history of opera” through producing new works focused on strong and intimate storytelling. Tell us more.

Experiments in Opera is an artist-driven company, 10 years old already, that pushes the boundaries of what the art form can be. They have done video operas, podcast operas, operas about horror movies, short flash fiction operas….

What we’re doing this year is an opera created using the model from the television writers’ room. We had a group of librettists collectively creating the Show Bible for the piece, all the characters, the outline…. There are 10 episodes in this opera. We’re doing it as a TV show, and it will be released as episodes that will be available online. We’re also in a partnership with WNET, so that means it will actually be on TV, which is really exciting!

To discover the work of this complex artist, visit her website: www.kamalasankaram.com.