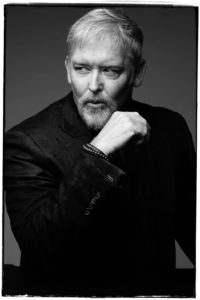 Most of us know Jay Hunter Morris as Siegfried in the Metropolitan Opera’s Live in HD Der Ring des Nibelungen. Many of us have also seen and heard him as Captain Ahab in Jake Heggie and Gene Scheer’s Moby-Dick. Here, he tells of family life behind the scenes and how he manages to combine the roles of husband and father with singing opera.

“On matters of family, betrothal, spouses, life partners, it is widely agreed that I am the luckiest, most blessed of all men,” Morris says. “I have been married for 11 years to Meg Gillentine. We met and became friends in New York City in the mid-90s when I was performing in the play Master Class and she was dancing and singing on Broadway while attending New York University.

“Many years later when we were both doing shows in Los Angeles,” he continues, “she suffered a critical lapse in judgment and granted me a date. Meg appears often on TV and in movies and commercials. She has performed on stages all over the country, my personal favorites among her shows being Cabaret, Damn Yankees, and Fosse. She builds custom furniture with her own hands, she blows glass, tools leather, choreographs opera, welds, volunteers at the PTA, designs jewelry, throws pottery.

“Most difficult of all,” he says, “she babysits and coddles a neurotic singer. Now, she gracefully leads the charge in raising a child. She is the great adventurer and she is fearless. A cancer survivor and thriver, she is the finest human being I’ve ever met.

“Ten years ago, our son Cooper Jack Morris entered the fray,” Morris recalls. “We travelled together extensively, our little trio, chasing both Meg’s career and mine. Early on we entertained the notion that Cooper would be ‘world schooled.’ It sounded so glamorous and romantic and wonderfully evolved, but sooner or later somebody has to teach this child basic math and good English—and it ain’t gonna be me! Our best choice was to settle outside of Atlanta, just down the road from Bubbe (Meg’s mom), in a great school district where we leave the majority of the teaching to the professionals.

“Cooper is now in the fifth grade and how he shines,” he says. “He is his own little dude. He carries his own drum. He has his own ideas and opinions on everything, and I am most curious to see who he becomes.

“Most all of his life, at least one of us has been on the road,” Morris continues, “but he doesn’t mind; it’s life as he loves it. Thank goodness he’s never said ‘Don’t go’ to either one of us. That would get tricky fast.

“Coop has fed kangaroo in Australia,” he says “and can provide a respectable British accent upon request. He sat next to the conductor during a performance of Spider-Man, has hiked the trails around Santa Fe, and got stung by a Portuguese man o’ war on a beach in Kailua. Home is still his favorite place. The world has not yet tarnished his innocence, but I fear that day looms near. Ten-year-old girls can be vicious.

“I wish I could report that it’s all easy and that we are model parents: ever patient, resourceful, progressive, and always kind with wisdom spewing forth in our every parental utterance,” he says. “Unfortunately, it’s not like that. Baby raising is hard. Being a good husband and a good father is hard—far harder than being a good singer.

“This life of the wandering troubadour, it’s not what you think,” Morris says. “Precious few of us fly first class, have recording contracts, wear tailored designer clothes, or dine at the most trendy spots. Our daily grind is rarely seen on the social feed.

“We don’t have respectable wine cellars,” he confesses. “We don’t get recognized in the checkout line at the Piggly Wiggly. We don’t make an exorbitant amount of money or drive exotic cars. Most of us drive minivans and we need help. We need the village.

“Cooper’s Bubbe is a blessing beyond compare,” he says. “We could not, would not, do this without her support and presence. Meg and I are in constant search of a healthy balance through friendships, books, our faith, our family—but mostly through each other. I quickly concede, she’s way better at all this than I am.

“In this demanding often crushing business,” he admits, “we all need a soothing, steady hand to keep us in the upright-and-locked position. Meg and Cooper have been there for me in the wings, smiling, savoring the victories, and they bolster me through the tough times as we sit and hear the phone not ring.

“I’m often asked if performing a role like Siegfried frightens or worries me,” Morris says. “Kinda, sorta, but not really. What terrifies me is the thought of some big kid bullying my sweet child. A reckless, unkind word from an adult that might shake his confidence. The bad day at the doctor’s office—that’s what frightens me.

“Is it worth it?” he asks. “The sacrifice required to build and, most difficult of all, sustain a career in the classical arts? Most days I say, ‘Oh, yes, it’s worth it.’ To stand on that stage and hear the orchestra play Act 3 of ‘Tristan,’ Siegfried’s funeral march, the overture to Moby-Dick, the final scene from Die tote Stadt.

“It’s worth it,” he answers. “But the compromises are very real. They are tangible. Listen to me, young singers. They are at times suffocating, crippling, and the questions are always on the table. What really matters? What is most important to me? Is this my best option? Is it time for a new chapter?

“We are learning daily to release,” Morris says, “to reject the concerns about what most people think of us, expect of us—the likes, the thumbs-up and -down, the praise from the fans, the harsh condescending disapproval from the critics. We have grown allergic to the drama. We are learning to rely instead on each other, on that small inner circle of friends and family.

“And we pray more fervently every day for all the help we can get,” he says. “Because we sure need it. And I bet you do too.”

Born in New York City to a British mother and a German father, Maria Nockin studied piano, violin, and voice. She worked at the Metropolitan Opera Guild while studying for her BM and MM degrees at Fordham University. She now lives in southern Arizona where she paints desert landscapes, translates from German for musical groups, and writes on classical singing for various publications.