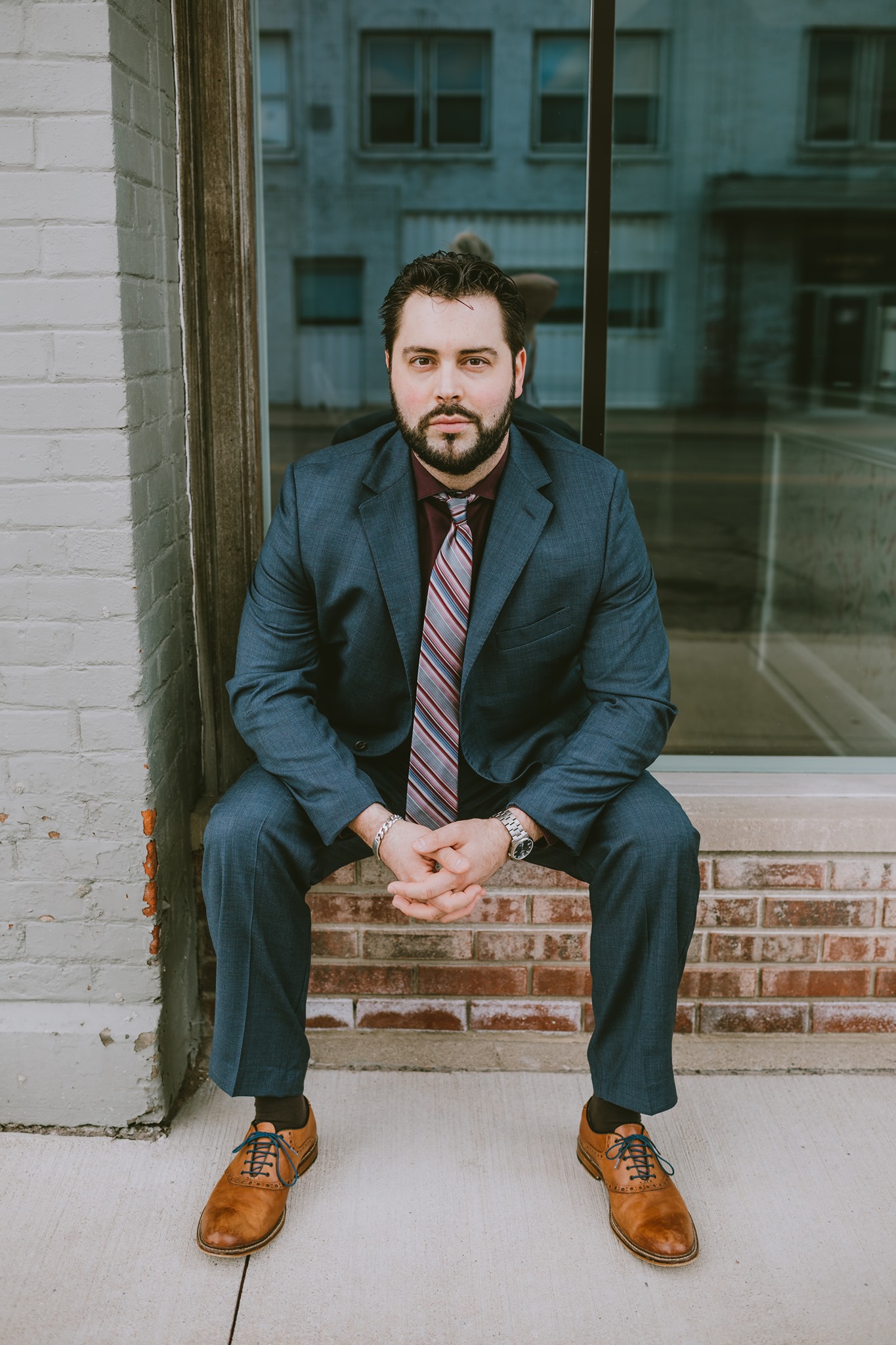 We all have a story,” Jason Duika says. He remembers his, starting with singing when he was just three years old, after hearing the music of Cole Porter. Then, around the age of five, he was walking with his mother one day when she realized his foot was turned inward. A neurologist determined it was a ‘pronounced motor tic’ and diagnosed Duika with Tourette Syndrome.

Tourette Syndrome (TS) is “a neurological disorder characterized by sudden, repetitive, rapid, and unwanted movements or vocal sounds called tics.”1 There is currently no diagnostic test for TS, nor any confirmed causation. While TS is accepted as a specific entity of movement disorders, it may be co-occurring with additional neurobehavioral problems such as Attention Deficit Hyperactivity Disorder (ADHD) and Obsessive Compulsive Disorder or Behaviors (OCD/OCB), among others2. Duika was diagnosed with many of these conditions.

In the years following his diagnoses, Duika started experiencing more frequent and varied tics, including facial grimaces and involuntary head banging. Eventually, he also developed coprolalia (involuntary profanity) and copropraxia (involuntary obscene gestures). Upon one such occurrence, a driver angrily confronted Duika’s mother at a traffic light, but when she explained his condition, the man “suddenly had a paradigm shift,” Duika says. He acknowledges that such tics can be “a lot for people to handle”—but, for people with TS, the stress of trying to control their behaviors can make symptoms worse, as tics often become more pronounced with excitement or anxiety3.

At one point, Duika’s mother had a T-shirt made for him which read, “I have Tourette Syndrome; I can’t help what I’m doing” to help facilitate understanding from the people around him. Though adults tended to be sympathetic, his peers did not. Duika was bullied often, sometimes brutally, throughout grade school, being repeatedly teased, tricked, and physically beaten. He was not called by his name, only as “the Tourette’s kid.” “It’s hard to be different,” he says, “and even worse when you’re a teenager.”

And there was never any hiding it. “One way to describe Touretters,” Duika says, “is ‘the lid is off the Id,’ so everything the Id makes us think subconsciously actually comes out, for example, any goofy thought you might have, you manifest. There was no anonymity with TS.”

And the tics only got worse. He developed “whiplash” tics, or forceful neck movements, which are sometimes so severe that they can paralyze or even kill the victim. Over the years he was treated with various medications including botulinum toxin injections, which control or lessen the severity of muscular movements, as well as clomipramine and pimozide, often prescribed for Tourettic tics. But, he says, side effects were horrendous and made his tics worse.

At age 12, he started voice lessons with Dr. Linda Thorne Kalellis. She taught him the basics and importance of breath support. Kalellis had a personal familiarity with how singing could help with such neurological disabilities. And she was the first one to pique his interest in formal voice training and vocal health and fostered his love of singing through his icons at the time: Luther Vandross, Barbara Streisand, and especially Celine Dion—who, by listening to and imitating her, helped him find his voice.

He described the intense focus and power of the sound with newfound breath support as being a “haven” from the tic impulses. It was both neurologically and physically relieving. In Duika’s words, “singing was therapy.” It was respite from the physical symptoms of TS and from the bullying and emotional  stress as well—at age 15 he was asked to sing “O Holy Night” at his school’s Christmas pageant, for which he received a standing ovation for several minutes. He remembers being shocked and surprised at their reaction, as “these were the same people who had been reviling and attacking me. And then I realized,” he says, with the positivity singing brought him, “maybe I should do this [for a living].”

His symptoms reached an apex at age 17, at which point he did everything he could to find relief. In addition to singing, he found physical activity a particular help, and began doing Tae Kwon Do, weightlifting, and cardio exercise as well as following a healthy diet. “Being a vocal athlete, I think bodybuilding has helped tremendously.” He even weightlifted competitively for a time.

But he had to work hard to make good grades, he says, because of residual TS symptoms. The physical tics went away, but not the “goofy thoughts,” as he refers to them. Social cues were a particular problem: “I didn’t understand them. I had to learn quickly in college what was appropriate or not.” But through his years as an undergraduate he found a lot of vital support and encouragement. Scott Messing, a musicology professor, tutored him four days a week to help him pass music theory; Will Nichols, the director of choirs, cast him in concert solos; and pianist Anthony Patterson was the first one to suggest that he might be a Verdi baritone. 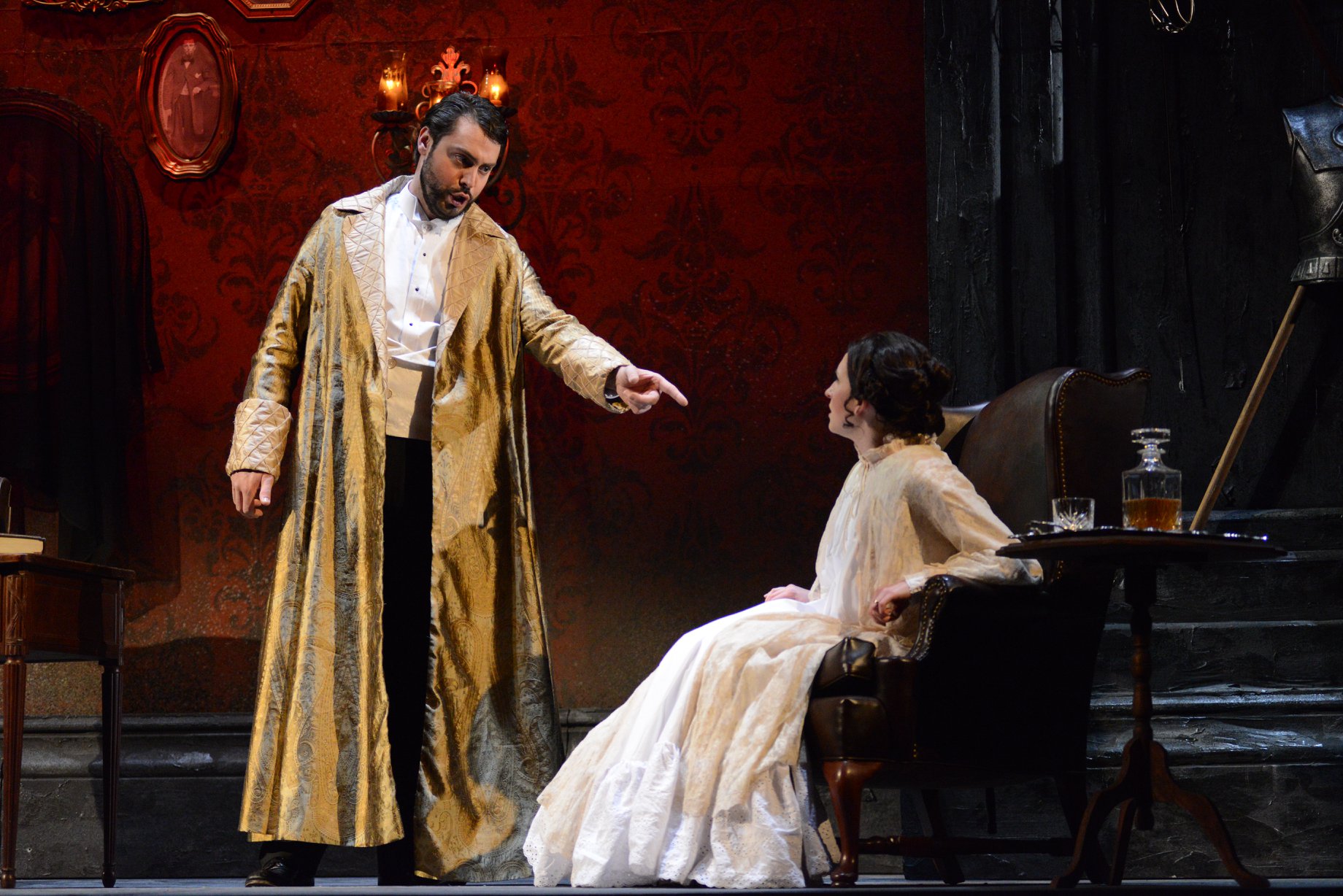 Duika went on to graduate school at Portland State University (Oregon), studying with Richard Zeller, who he calls one of his “biggest proponents and technicians.” There he sang his first Verdi role, Ford in Falstaff—opposite Zeller. “He was so kind,” Duika recalls. “I was 25 years old, and he would talk me through things and led me through my first audition season. I didn’t get anything that year, but he suggested that I just ‘needed more time to cook’ and recommended that I look at performance diplomas,” which Duika went on to pursue at the Indiana University Jacobs School of Music, where he has since been invited back to sing Enrico, in Lucia di Lammermoor professionally.

Duika then participated in young artist programs, notably with Palm Beach Opera. It was roughly two years later when he auditioned for manager Peter Randsman who, as Duika recalls, said, “Oh, you’re a Verdi baritone” and offered him a contract. Duika credits his teacher Andrea DelGiudice as the one who has helped him find his “Verdi sound” through roles in I due Foscari and Nabucco. “Andrea calls me ‘clinically Verdi.’ I wouldn’t have been able to do those things if it hadn’t been for her,” he notes. 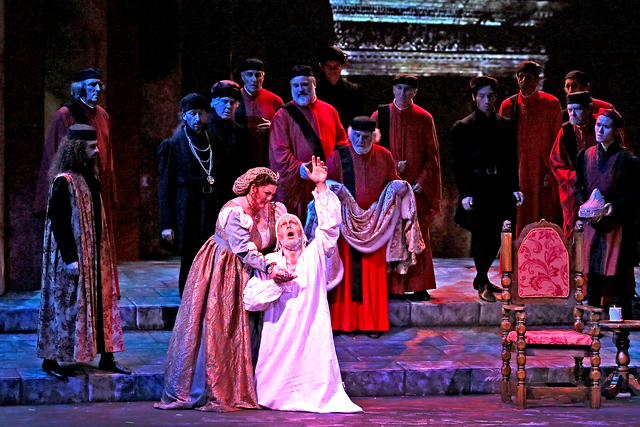 Jason Duika as Francesco Foscari and Christina Major as Lucrezia in I due Foscaari, West Bay Opera, 2019

He has now sung three major Verdi roles with West Bay Opera (California). “[General Director] José [Luis] Moscovich really believes  in me,” Duika shares, “and they allow me to spread my wings within the repertoire in a safe environment.” He says that finding his “team”—that is, “a teacher and a manager who both believed in me, helped identify my Fach and were determined to help me”—allowed him to navigate and realize his potential in a singing career as a person with TS. “I’m very grateful to Peter [Randsman] for putting me out there, pushing me, and getting me ready for each next thing.” 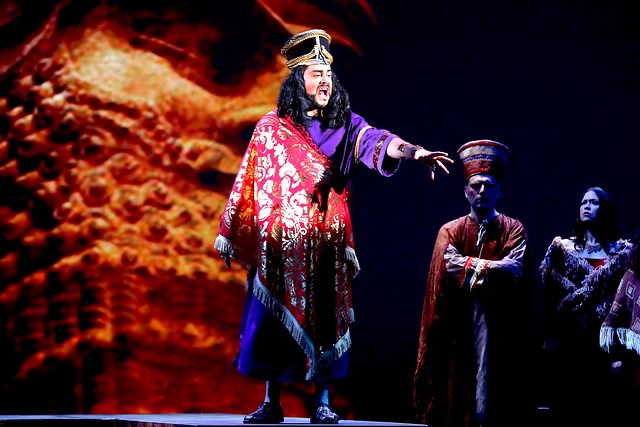 “I don’t go in and tell people I have TS. The voice has to come first,” he says. “Rigoletto, for example, is one of the longest roles in our repertoire. If you don’t have the voice stamina, then it doesn’t matter if you  have the physical stamina, body type, or not; but the darkness and the squillo [have] to be there.” 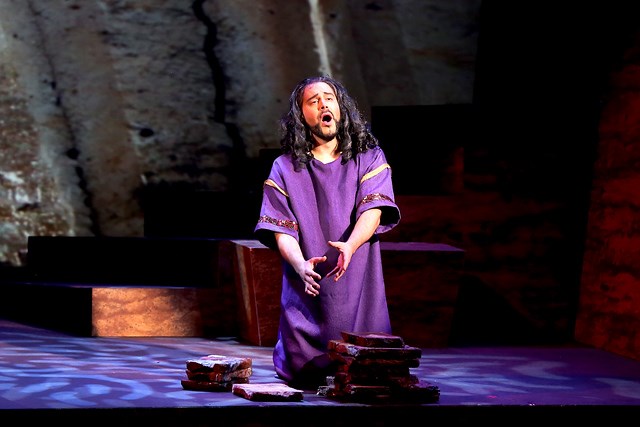 In the end, despite the various ways he suffered with his disability, Duika looks back with gratitude. At the same time that singing and exercise helped him overcome his TS symptoms, TS also contributed positively to many aspects of his life. Echolalia (involuntary mimicking) is another tic which Duika developed in addition to his other symptoms. However, now he uses this ability as a way to entertain people by mimicking famous actors—and he even credits this particular symptom for his having a “great ear for languages and aural recovery and recall” in his work, thus being able to learn a score quickly. 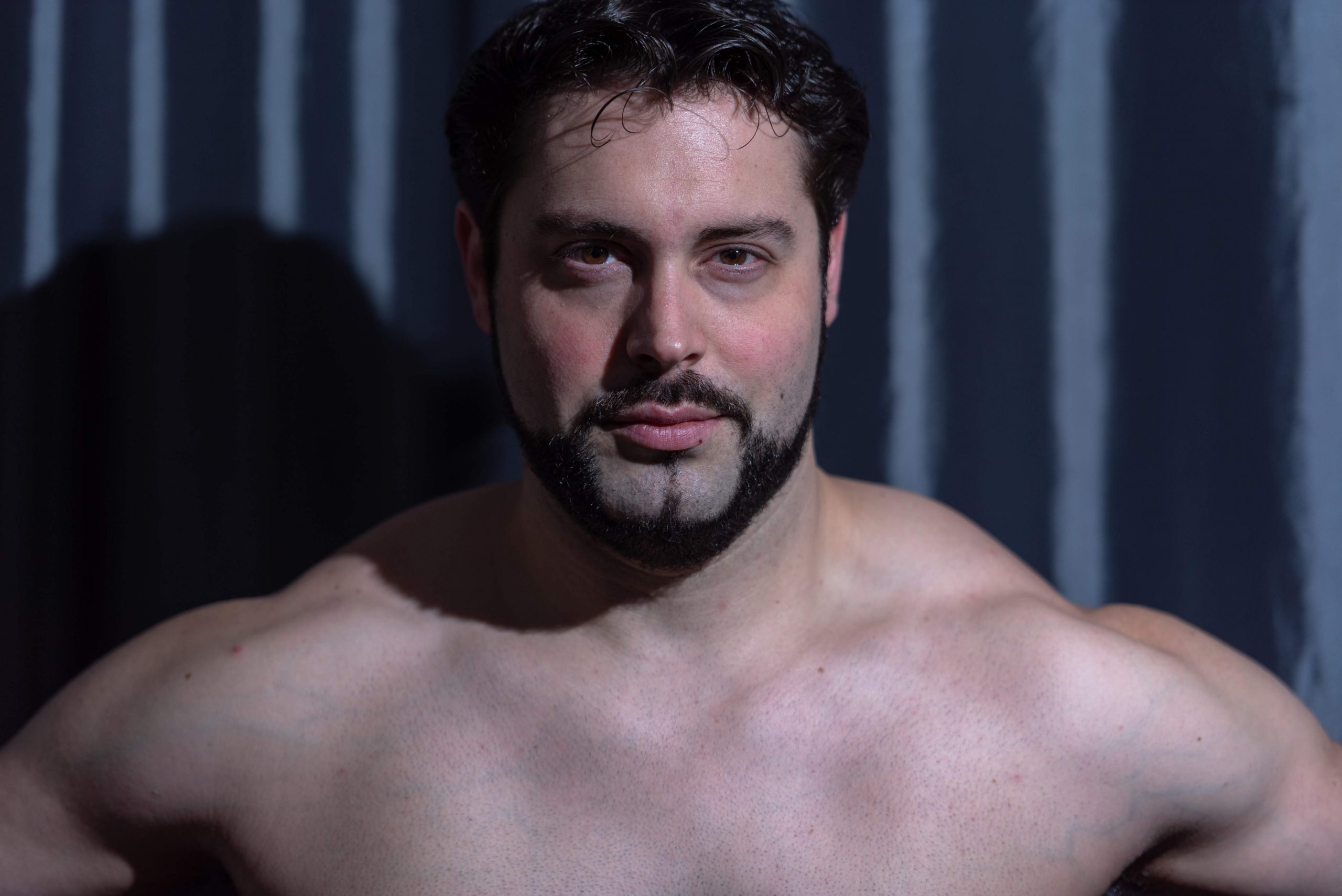 “Though I would never wish [TS] on anyone, I look back on it as a great gift. It was my greatest teacher. It taught me about humanity and humility. I wouldn’t be who I am without it.”

For more information on Jason, his story, and Tourette Syndrome, see the following:

Elisabeth Marshall is a freelance solo and ensemble soprano in recital, oratorio, opera, and musical theatre and has sung across the U.S., Canada, Europe, and South America. Now based in Chicago, she has previously served on the voice faculties of the Ithaca College School of Music and the University of Southern Maine School of Music. She holds a DM from the Indiana University Jacobs School of Music and was a Fulbright scholar to Leipzig, Germany. To learn more, visit www.elisabethmarshall.com.