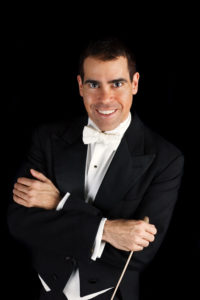 American conductor and pianist Kamal Khan performs in opera houses and concert venues around the world. As an accompanist, he has worked with opera stars like Marcelo Álvarez, Pretty Yende, Bryn Terfel, Nadine Sierra, and Juan Pons, among many others. He is also a sought-after vocal coach who brings a singer’s understanding to his work.

You trained as a violinist and a pianist. How did you discover conducting?

I started as a violinist but, by 14, I was very committed to the piano and then I thought I might become a conductor. What I really wanted was to sing. I did my undergraduate degree in singing at Manhattan School of Music followed by a very useful, stimulating masters in accompanying. I also got an education in what happens if you get the wrong [voice] teacher. At the time it didn’t even occur to me to question why I was losing my natural abilities. I thought it surely had to be my fault.

The first mistake the teacher made was to change my Fach to tenor, which might have happened on its own, in time. I’m “Mr. Conservative” about Fach changes. I wait until it’s blatantly inevitable, because doing it too soon can create a lot of confusion and damage and also take away someone’s joy in making music. Teaching is complicated. You have to figure out what makes every individual singer tick.

This experience must serve you well in nurturing the unique gifts of young singers.

Absolutely. I believe that their individual gifts and the natural urge to make music should never be stifled. A singer works with a voice teacher, a coach, a diction teacher—and what can happen is that the coins of artistry can fall between the layers of all that information.

I want to help singers become their own synthesists. I still have the good fortune to spend time in South Africa. The work there got me very aware of the relationship between language, body, and support.

There are 11 official languages in South Africa. When I was teaching at the opera school there, everything functioned in English. The mother tongue—as my father who was from India said—is the language you count in, you pray in, you curse in. Until someone translates the text into their mother tongue, they don’t really know it. The brain may know it, but the voice won’t because, while the dialogue between the brain and the voice is a whole complicated discussion, if you leave your gut and your solar plexus out of it, there is no meaningful dialogue.

To get the natural linguistic impulses, you’d have to know the translation in your own vernacular, in the way that you actually speak. It does no good to just accept, for example, this translation: “Arisen is the night and Silva does not return.” I would say, “It’s getting dark and Silva’s not back.” And a young kid might say it differently.

So you encourage singers to translate the operatic libretto into their way of speaking.

Into the language that feels believable in their own body. Then that translates into the body’s connection with the singing of that text. The physical patterns of their mother tongue are where they feel honest emotion.

How do you then help singers transfer that honest emotion to the foreign languages in which they sing?

By teaching diction so thoroughly that there is no doubt about what is meant to be happening. Doubt is what makes this transfer difficult. I have one colleague whom I respect enormously who says she teaches speech-level singing: “Si canta come si parla.” The question after that is: “Ma come si parla?” You have to constantly look at it from all sides: the emotional, the physical, and the intellectual.

Please tell us about your experiences with the abundantly talented singers of South Africa.

In 1997, I went to South Africa for the first time to conduct Lucia di Lammermoor and I have gone annually ever since. Apartheid ended in 1994 so it was very recent that everyone got access to training. The college kids would ask me for help with their exam pieces. Word got around that on Saturdays I was at the theater listening to people.

I’d also go out to the townships on Sundays and work with two or three community choirs a day. People’s choirs there become their identities. Most have had little access to training and reading Western music notation, but they hear great singing on YouTube. At his first coaching with me, a teenage Luthando Qave—who later became a Lindemann young artist and now sings all over Scandinavia and Northern Europe—brought “Avant de quitter ces lieux,” and the position of his voice was naturally extremely beautiful and right.

I told him that his sound reminded me of Gino Bechi and he said, “Maestro, I love Gino Bechi!” And I thought, “How does this young man know who Gino Bechi was?” You don’t find all that many students at well-funded conservatories who know that. You have to want information to find it.

In South Africa, each region produces different kinds of voices. For example, the Zulu region that gave us Sunnyboy Dladla and Pretty Yende produces higher, pointier, shinier, Bel Canto voices. The South African audience is very knowledgeable about the physical effort that people need in singing because they experience it in their choirs. Many could be singing at the Met—that’s how good they are! The talent and the wish to sing are inborn.

What about your workshop for singers in the Dominican Republic?

I’m super excited about that! The Fundación Sinfonía has been organizing it. I’ve gone there three times. There are four constituent groups from the Dominican Republic: young singers in their late teens and early 20s who have a real desire to sing professionally, singers in their late 20s and early 30s who are active in other parts of the world and come back to participate, kids who sing mostly popular music and  whom it’s been fascinating to expose to all this, and professionals who work in the conservatorio and are gracious enough to welcome new input.

I work with them individually and in groups. We made assignments for a scenes program at the end of the first taller (workshop), then we added staging to it, and next time we’ll add the orchestra; we build incrementally. The Caribbean doesn’t have any schools giving degrees in opera, and it should.

As a conductor, how do you approach the totality of the performance while remaining aware of singers’ needs?

I don’t really have a tempo that’s my tempo. I certainly have a pulse that I think is right for the composer’s indications. There are times when I look at the score and listen to the singers and then decide what might be best for them. Sometimes that has to be negotiated.

I’m lucky that I can sit at the piano with them and figure out their organic timing and their breathing. Then I understand better what their musical needs are. Obviously, you want to give singers a structure in which they can strive, thrive, and flourish.

Can you tell us what it is like for you to work with established opera stars?

They absolutely know what they need. In the beginning, my career was very much facilitated by the baritone Juan Pons. I’m so grateful to him because I learned so much about figuring out what a particular singer needs. When someone knows what they want and need to function best, they force you to develop different technical tools.

Sometimes they tell you brilliant things. I’ve worked a lot with Bryn Terfel. A colleague was having trouble singing something in one breath in a duet with him and Bryn said, “Kamal, let’s not always suppose that it’s more expressive if we don’t take a breath. Sometimes that breath tells more than singing.”

That was both very true and a way to take the pressure off his colleague. It was a big representation of why one loves Bryn so much. He knows how to make everyone more at ease and still put the music first.

Also, Dmitri [Hvorostovsky] was wonderful to conduct. If someone is singing really well, if they know how to be generous with their artistry but be economical with their voice, they can sing all their big arias one after another. He would do the arias in groups of two and not need rest and the encores were huge!

I watched him sing a lot. I never saw him lift anything. He stayed at speech level and that’s why his Italian was so beautiful, and his technique was so Italian despite his being Russian. He made the Russian language as beautiful to sing in as the Italian. He didn’t over open, yet his singing was never constricted.

The word “economy” has a bad rep because to be economical could be seen as being stingy or parsimonious, and I don’t mean that at all. It’s a state of balance. Some of the overdoing in singing comes from thinking, “We must really convince people; we must get this across!” Forcing for emotion is just as dangerous as forcing for tone. The emotion has to be organic. This is where it gets back to that honest expression in your mother language.

Any other advice for singers?

The story of opera in the 21st century is all about the globalization of the art form. Keeping an open mind and listening to what your international colleagues bring to the rehearsal room is incredibly useful to your development as an individual artist. It takes a lot to make a career.

In the book Outliers, Malcolm Gladwell talks about how everyone who is gifted at something, in some crucial period of their training, put in 10,000 hours of hard work. One could say, “But singers can’t sing all day!” No, but singers can study languages and learn music. Imagine if you do six hours a day of all the related work for five years—you’ve done your 10,000 hours!