Mary Saunders Barton is a pioneer in crossover pedagogy. Read how her unique experiences shaped her as a performer and teacher and how this same journey continues to empower and encourage other singers and teachers to expand their musical palates.

n my capacity as a teacher of voice and vocal pedagogy in higher education, I have the great privilege of mentoring emerging young voice teachers as well as lifelong, community-based voice teachers. Frequently, these teachers have great ears, detailed knowledge of the vocal mechanism, and thorough training in classical singing. Despite this, the concern I encounter most from these teachers is a reticence to work in other genres of vocal music, specifically music theatre.

Somehow, these exceptionally well prepared teachers feel they lack the experience or knowledge to effectively help students produce the sounds they want in a way that is healthy, consistent, and authentic. With that in mind, I have set out to interview some of the most prominent voice teachers in the music theatre genre and ask them for advice about how to bridge this (perceived) gap between the classical and music theatre techniques. 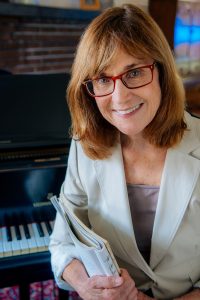 The first of these conversations was with Mary Saunders Barton, who graciously agreed to help me start this journey of helping classical singers grow more and more confident and comfortable singing and teaching this style. As professor emeritus at Penn State University, where she founded the MFA in musical theatre voice pedagogy program, and coauthor of Cross-Training in the Voice Studio: A Balancing Act, Barton is the perfect choice for the first of these conversations.

While many readers likely know you from your work in the music theatre realm, some might be surprised to hear you studied classically, even studying French song with famed baritone Pierre Bernac. Can you talk a little about how your journey took you from Paris to Broadway?

I had the great good fortune to be born into a big, boisterous, musical family in 1950s New Jersey and sang and played piano by ear from as early as I can remember. When I was 8, my mother took me to see Mary Martin in Peter Pan on Broadway. Peter flew out over the audience and threw fairy dust on our heads and, although I did not know it at the time, that pretty much sealed the deal for me.

The following year, my mother signed me up for the children’s choir at our church where I remained through high school. She saw to it that I took piano and voice lessons in my teens. I spent hours in our living room jumping from couch to chair with the hi-fi blaring, singing along with Julie Andrews in My Fair Lady and Camelot.

I have always loved languages and was an ardent Francophile by the time I was 16. In that time and place, my parents did not consider theatre a career option for a woman, and I pursued French language and literature in college with a minor in music. I was granted a fellowship for graduate study abroad and chose Middlebury’s Paris program.

This was a heady time to be in Paris. I arrived to see the streets of the Champs-Élysées ransacked by the student protests of May 1968, and American capitalist imperialists were none too popular. President de Gaulle had left the city but now returned, and things quieted down. This was an extraordinary opportunity for me to experience a culture from the inside.

My first apartment was a pension in Montmartre [that] I shared with a roommate. A mutual friend told me of a wonderful voice teacher named Pierre Bernac who worked with international students. We set up an audition appointment and went to his apartment on La Rue de La Motte-Picquet one afternoon to sing for him. We were greeted at the door by a tall, elegant man in his early 70s. I was 22 years old and I don’t think I had any idea what a stroke of good fortune this was for me. I sang “Après un rêve.”

When I finished, he looked at his accompanist and smiled, “Ah, la petite . . . mais elle est musicienne!” He remarked with a twinkle that I sang like “un enfant de choeur” and offered to teach me. I took weekly private lessons and one masterclass a week during my time in Paris. Pierre Bernac was a teacher of extraordinary kindness and compassion, guiding us so gently we felt as though we were teaching ourselves! His inspiration remains with me today.

When I returned to New York, I began teaching French at a professional children’s school near Lincoln Center for actors and dancers. It wasn’t long before I realized I wanted to be doing what they were doing! Within a few short years I had registered to study acting, musical theatre, and Shakespeare at the Herbert Berghof Studio on Bank Street in the West Village.

My first professional job was playing Guinevere in Camelot and then Eliza Doolittle in My Fair Lady opposite the man who would become my husband! I continued to study acting, singing, and dancing a la carte so to speak—there were no professional training programs for musical theatre performers in existence yet.

I had a 15-year performing career, finally making it to Broadway in 1979. Teaching musical theatre singing evolved very naturally as I began to have children and I continue to love every minute of it.

Many classical singers and classically trained voice teachers I speak with are intimidated by tackling music theatre repertoire, especially that of the last 25 years, because they think it’s so different from how they were trained. Can you talk a little about which concepts carry over well from classical training?

The foundational elements of classical training—energized and sustained breath flow, vibrant legato, and an even scale are techniques I would want every singer to develop as they begin their training. Techniques specific to musical theatre spring from speech and can be introduced concurrently.

Every singer can recognize a center to their speaking voice. I think it is essential for teachers to encourage healthy speech first and foremost in students regardless of the genre. If a female singer only operates in a very narrow, low speaking range, for example, what happens to that voice when she has to call out or make a speech to a large group without a microphone?

We all know the expression “si canta come si parla” which has its roots in early pedagogical teaching. Why not also turn that around and say, “si parla come si canta!” John Wilcox, the first president of NATS, wrote a book called The Living Voice: A Study Guide for Song and Speech, in which he talks about the importance of training the speaking voice as fundamental to the training of singers. In her book One Voice: Integrating Singing Technique and Theatre Voice Training, Joan Melton has created a pedagogical approach based on the principle of training the whole voice for multiple uses.

It seems to me much of the anxiety related to working in contemporary vernacular singing styles stems from a fear of violating the carefully developed tunings of classical vowels where self-amplification is the goal. The question is whether vowels authentic to natural speech can coexist with classical vowels in the same artist. Or does one style cancel the other out?

My experience has been that it can be an exceptionally effective tool for singers to experiment with different register/resonance balances in developing optimal flexibility and resilience.

Coordinating more chest into a woman’s classical middle voice can strengthen the range below and above it and unify the instrument. For male classical singers, introducing speech-like vowels above the second passaggio at or around F4 can increase range significantly.

Confident classical technique has the obvious benefit of opening casting possibilities in legit roles. It is an absolute privilege for a young musical theatre belter to be able to sing a classical aria successfully. There is no reason to feel stuck.

A big topic discussed among voice teachers dipping their toes into the music theatre world is breath. Specifically, whether classical breathing can be applied to modern music theatre vocalism. Can you talk a little about how the breath mechanism is approached differently in the two styles?

I wonder a lot about this concern. I may be in the minority about this, but I teach breathing the same way for both classical and vernacular styles. If too much air is taken and then held back or forced out, that is as much a technical problem in classical singing as in contemporary styles.

We will want to manage the use of air to suit the task at hand. A Shakespeare soliloquy, an opera aria, a belt aria, a contemporary pop song all need an efficient airflow. The great advantage to cross-training voices is that it gives singers the opportunity to experience the way we “breathe to say” different vowels, words, and thoughts in different ranges, using different registration and resonance strategies.

One question I love to ask voice teachers is can you concisely explain your concept of belt?

OK, I will quote myself now. This definition is gender neutral and range specific. “A belt occurs in a TA (chest) dominant mix above the F4 passaggio as an optional resonance or color. The quality presents itself on open vowels to D5 (as in MET/HAT/ HOT), above which all vowels close for the high belt.”

What would you say to the classical singers and voice teachers who are concerned that belting will hurt a singer?

I would encourage singers, voice teachers, and students to experiment playfully with their speaking voices.

If a classical singer has a problem producing a floated call above F4, then I would want to address that and help them find ways to energize and elevate speech in an extended range. I think this is empowering for women who can often feel “talked over” by men.

Do you advocate for the concurrent training of singers in classical and music theatre genres, or do you think this confuses singers as they are refining their technique?

From my point of view, concurrent training is helpful for any singer developing technique because it brings the whole instrument into constant play and promotes a healthy balance and coordination throughout the entire range.

As singers begin to define their career path, repertoire demands will shift and the focus will necessarily turn to the artistic demands of the genre, but the approach remains the same.