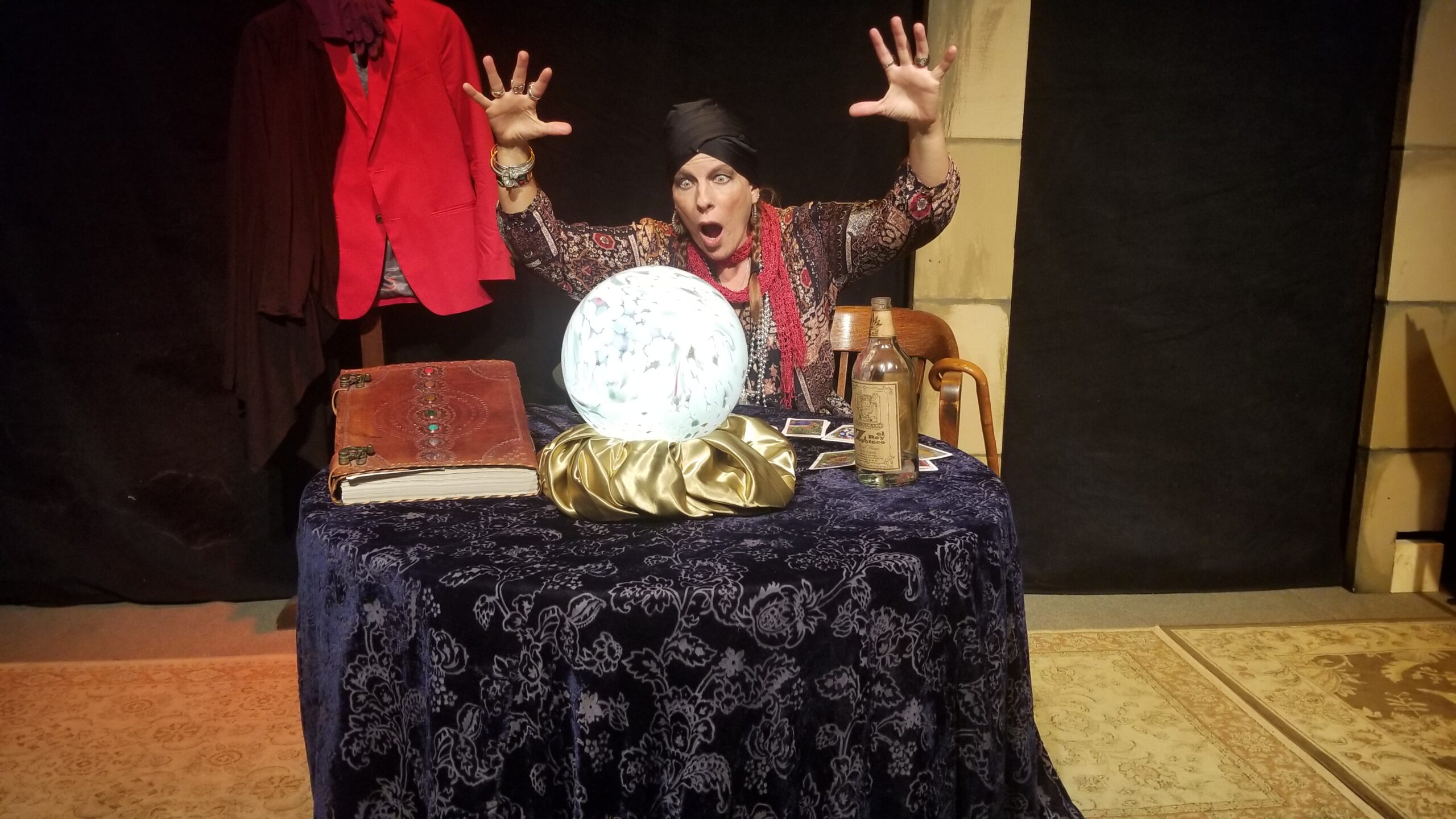 Heidi Skok as Baba in the Center for Rock Research’s production of The Medium, 2021

Heidi Skok began her career in professional opera with the lightest soprano roles and has been able to establish herself in a second career as a contralto, more than 25 years later. Skok’s vocal odyssey has been harrowing in many ways, making it doubly heartwarming to witness the serenity and wisdom that are now hers to share with any young artist fortunate enough to study with her.

Heidi Skok lives and teaches today in Mentor, OH, near her hometown of Concord Township and near Willoughby, where she began voice lessons in her early teens. After singing in her high school swing choir and performing as leading lady in several musicals, she thought of continuing vocal study at Juilliard or Mannes, “but having been raised on a farm, I wasn’t ready for New York at 18.”

Skok chose Pittsburgh’s Carnegie Mellon University, singing little opera there, but multiple recitals taught her a good deal about being an artistic collaborator. She started at Pittsburgh Opera in the chorus during her junior year, noting “all the soprano stuff was always so hard, although I got through it.” General Director Tito Capobianco then invited her into his six-week summer program, after which he cast her as the Second Genie in The Magic Flute, her professional debut.

It was at Wolf Trap Opera in 1991 and 1992, singing four leading roles of Mozart, that she learned what school hadn’t taught her, “which was how to sing in an opera. I had to just go out and do it.”

It was immediately after Wolf Trap that the Met’s Young Artist Program beckoned to Skok. Her three years in the Met program would prove exceedingly stressful, due to her own ever-increasing struggles with her voice and worry over its ability to handle whatever roles she was assigned. Today Skok also realizes that at that time she was suffering from low self-esteem. “My older sister passed on when I was nine, and I don’t think I got over it. I compressed my grief, holding inside me a sadness that I carried forward. It was my prayers and the love I felt from others that helped me.”

Among the many supporting roles she sang at the Met, several did give Skok a chance to shine, including the Fifth Maid in Elektra, Echo in Ariadne auf Naxos, and her debut role, the Shepherd in Tannhäuser. “I went on as third cover, singing the only role that felt easy, since it didn’t go above a G!” A laryngologist prescribed steroids, which got Skok through performances. She was skilled enough technically that no one questioned her classification as a soprano, but she refuses to blame anyone: “I had so many people who said, ‘You’re sounding good,’ so I thought, ‘I guess this is supposed to be hard.’” She’d listen to world-class sopranos and wonder how they sang so easily, finally acknowledging in retrospect that “it was because they really were sopranos and I wasn’t.”

After finishing the Met program in 1994, vocal insecurity left Skok unable to audition effectively. Joel Bloch, a prominent artist manager, sent her to five auditions, “but I couldn’t get into character. I was like a stiff board.” Bloch eventually told her, “I can’t help you anymore. It’s boring—you’re only interested in making gorgeous tones.” Skok continued performing regularly at the Met until 2003, “. . . they retired my soprano voice.  At the time I thought it was the worst thing in the world, but singing that repertoire just wasn’t right for me.”

She performed concert work, including an engagement in 2006 of Vaughan Williams’ Benedicite with the Albany Symphony Orchestra that revealed Skok’s difficulties as nothing else had previously. The piece needed a high B natural, and she just couldn’t manage it. “A voice doctor had to give me a steroid shot. I croaked on the phone to Trish McCaffrey, my teacher at the time, ‘I can’t sing anymore. I just can’t get into the top.’ She said, ‘To heck with it…you’re a mezzo!’”

As Skok’s understanding of her instrument evolved, she traced the origin of her trouble. When studying as a 12 year old with her first teacher, “I was a belter and didn’t know how to sing in the head. Saying the belt was bad, my teacher took it away from me and pushed my voice higher, so there was no chest. Trish was the first teacher who addressed chest voice with me and built it back in.”

Skok feels boundless gratitude to McCaffrey and others in the field who have thoroughly understood what she’s experienced, such as Met coach Roger Malouf: “He’s such a generous, compassionate person, with a great intellect, and was essential in helping me stand up again.” Others who supported her include former Met head of music Craig Rutenberg; baritone and teacher Mark Oswald, who currently guides Skok’s voice; her former teacher, William Riley, and his close colleague, speech pathologist Linda Carroll.

After 2006, Skok didn’t appear in opera for the next eight years, but she did sing numerous concerts, including successful appearances at Carnegie Hall as a mezzo. “I also sang for [Met assistant manager] Lenore Rosenberg, but it was too soon. At the Met in 2006, there were people who knew me and couldn’t see or hear me as something else.” Finally, in 2014, Skok sang her first mezzo role onstage, Sesto in Giulio Cesare in Albany, but it felt too high. A better vocal match came two years later, when the Midwest Institute of Opera (Bloomington, Illinois) needed a Mme. de Croissy for Dialogues of the Carmelites. Skok felt ready for a challenge, and “the role let me sing in the middle, and it felt great!” 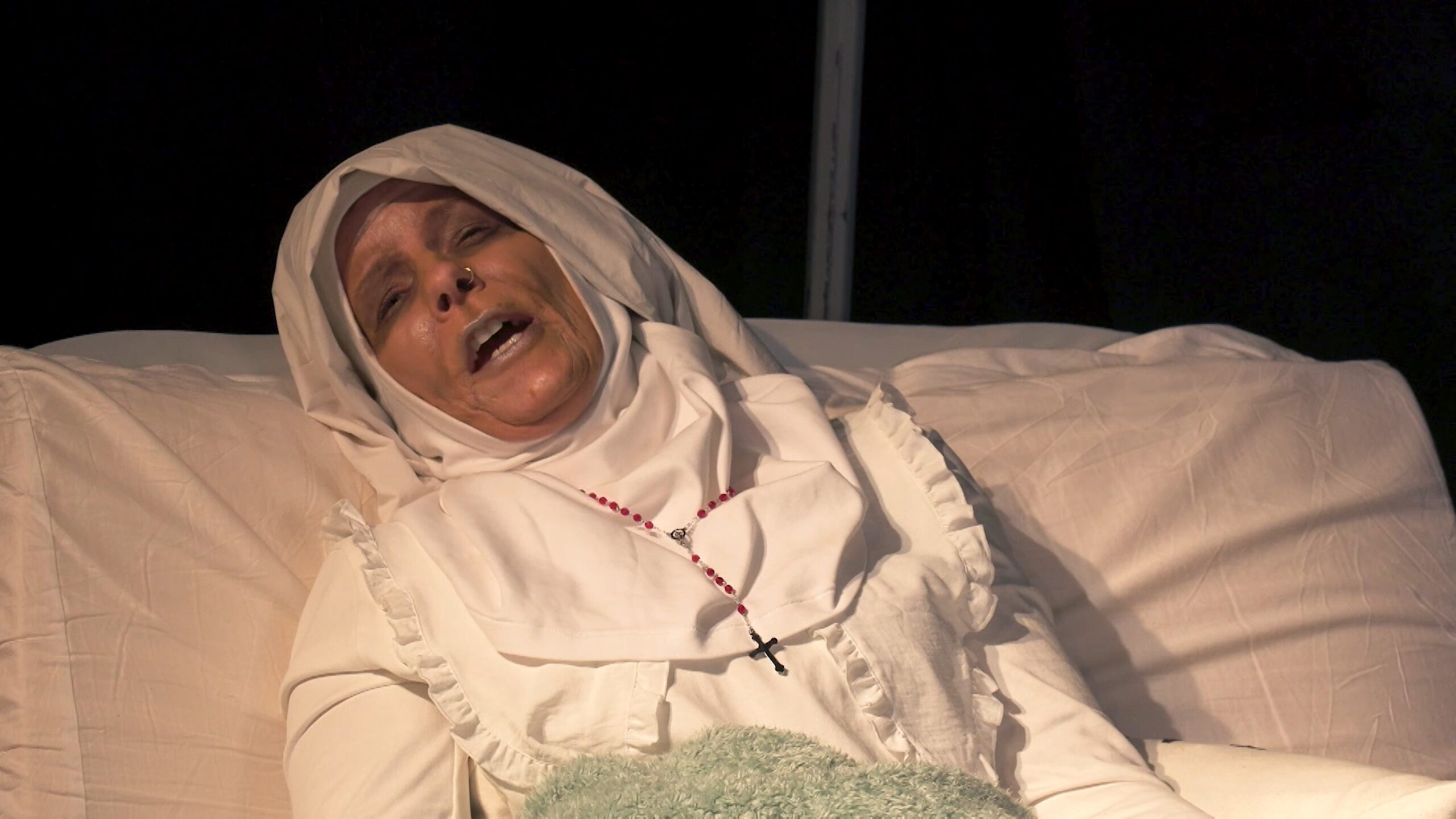 Heidi Skok as Mme. de Croissy in The Center for Rock Research’s production of Dialogues of the Carmelites, 2021

Singing Croissy planted the seed of Skok’s new vocal identity, which started to solidify beginning in 2019. “At the piano I’d started to perform pop songs, singing in chest voice. I posted videos on Facebook, and people began commenting on them.”

Then, for NYIOP’s anonymous auditions in 2021, Skok recorded “Weiche, Wotan, weiche,” considering this a terrific opportunity to be heard by unbiased ears. “I was just looking for confirmation that someone else thought I was a contralto besides me!”

Passed through to the next round, she sang online for representatives of several German opera houses. She could offer only Erda, but that was enough for NYIOP’s David Blackburn to invite her into his organization’s online Wagner program. Skok tears up remembering, “I sang right away for Jane Eaglen, and she said, ‘You’re a contralto! Where have you been?’ It was magical. When people say, ‘You’re a mezzo,’ I cringe. I only want to be identified as a contralto, and everyone now agrees that this is what I am. I do think my voice is warm and inviting, but it has a brilliance, too. I also think I can tell a story very successfully now, and I couldn’t do that before.”

In a genuine coming-full-circle moment, Skok auditioned again for the Met, in June 2022. “At 54, that doesn’t happen every day! After I sang Croissy, they asked for Erda. I was told it was a very good audition and that when there was something for me, I’d hear from them.” In February 2023, Skok will preform onstage with First Coast Opera in St. Augustine, Florida, in the formidable title role of The Medium. She was hugely looking forward to it, and one can only hope that her other dream roles—Waltraute, both Erdas, Klytämnestra—will soon come her way. “I need to live in a character and totally inhabit her. I spent enough time singing pretty—I want to dig into what I am now. As a contralto, I’m just getting started!”

Skok has taught at numerous conservatories and colleges nationwide, and through SkokStudio.org she has private students from all over the country. Does she see particular mistakes that teachers make in dealing with students in vocal transition? “Some of it is ego, which we really have to avoid. Teachers also feel responsible, and unwilling to admit, that something should change. I’m not afraid to experiment. Instead of doing that, teachers tend to just say, ‘This is what you are!’”

Skok’s teaching doesn’t just cover technique; she also helps her students be better colleagues, “it’s really the love people have given me, and that I’ve endeavored to give to others, that has gotten me through so many tough spots. I’ve always been willing to be a good colleague.”

Closure is important to Skok. For example, she remembers that, after being fired by a regional opera company, “I was bothered about that for years—but they really did me a favor, because that contract was for Adina and I really wasn’t an Adina! Then the person who fired me came up as a Facebook friend request. I wrote thanking them for firing me and said, ‘I’m so grateful for your being part of my journey.’ They wrote back to say, ‘I’m so sorry I did that,’ and now they’re one of my strongest supporters. Young singers should learn that you don’t go kicking people in the butt, even if they kick you. You keep going, and sometimes those people become your biggest blessing.”

Roger Pines, former dramaturg of Lyric Opera of Chicago, has adjudicated for major vocal competitions for the past three decades. Currently a freelance writer, lecturer, coach, and broadcaster, he has taught the opera repertoire course at Northwestern University’s Bienen School of Music since 2019.