Most audition judges will eagerly hear any singer whose repertoire shows some musical curiosity and a sense of adventure. Why choose only the “standard” five arias in your Fach for one audition after another? There’s so much repertoire out there waiting for your voice! OK, your “list of five” shouldn’t all be arias found off the beaten track, but one or two would certainly be welcomed by those auditioning you. “Aria Savvy” presents two arias per column, introducing you to pieces that will invigorate you musically while providing a refreshing change for your listeners.

Of course, most sopranos adore “Depuis le jour,” but it’s nearly six minutes long and is never totally satisfying when sung with piano accompaniment. Neither problem occurs in another aria from Louise (one that, much to my dismay, I’ve never once heard in an audition). Irma needs the same warmth, vocal weight, and sheer amplitude as the biggest phrases sung by Louise herself. Perhaps singers believe this aria can’t be excerpted for auditions, since other characters sing various interjections during the first section. In an audition, however, losing those lines creates no difficulties at all.

Irma is a cameo role, but we get so much from her in these few pages of music that we instantly know her. She and Louise work with several other young women as seamstresses in a Paris atelier. Believing (correctly) that Louise is in love, Irma reveals her own feelings to the group: when she’s on the street walking, she experiences a kind of fiery radiance when she knows that certain eyes are admiring her. She then describes a mysterious voice that is the voice of Paris – in other words, the voice calling one and all to pleasure and love.

The aria is in two halves. It exudes passionate excitement almost from the start, with a sort of mini-climax midway before calming a bit as Irma starts the aria’s second half at “Une voix mystérieuse.” The composer then again builds the intensity with a sweep in the surging lines, requiring strong, rock-solid breath control encompassing a full-voice high A, in itself a moment of extraordinary emotional release.  If  you have the necessary expansiveness and tonal sheen, as well as a true sense of joy in your communication, don’t pass this one up. In a word, it’s glorious.

Listen to: Lyliane Guitton (begin at 5:01 in the clip) 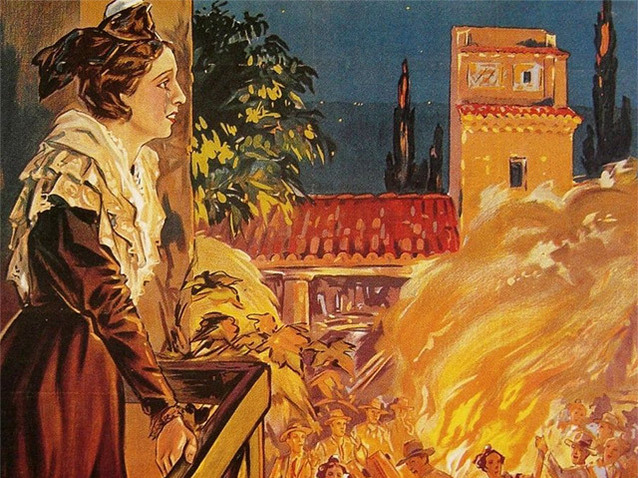 I’ve heard many tenors suffer when auditioning with the arias of Faust and Roméo, due to the former’s high C and the latter’s three high B-flats.  If you need an elegant French aria, and if you do well in the passaggio but don’t yet have the upper extreme in hand, try Vincent’s prayer from another Gounod work, Mireille, an aria that doesn’t take the singer above A-flat. Near the end of the opera the character finally has his moment alone, which conveys a marvelous sweetness befitting an ardent young lover. You can impress here with musicality and beauty of voice to the same degree that you would in those other two Gounod arias, but without risking the potential dangers that their topmost notes present.

In 19th-century Provence, Mireille is in love with Vincent, a basket-weaver. The two promise each other that, should either of them encounter misfortune, they should meet at the chapel of Saintes-Marie-de-la-Mer.  Mireille is also loved by Ourrias, the rough bull-tender. He confronts Vincent and injures him in a fight. Vincent, recovers, however, and rushes to the chapel hoping to find Mireille. Attempting to get there, she struggles crossing the Crau desert, arriving at last but then dying in Vincent’s arms. Earlier in that final scene, when Vincent is awaiting Mireille, he sings in his recitative that he’s full of worry wondering why she hasn’t appeared. In the ensuing aria, he calls on the angels of Paradise to protect her, and for the summer sun to spare her.  He adds that in a dream, he saw her running alone, pale, vulnerable under the sky’s glare, as she prayed to God’s saints.

After a few brief, anxious lines of recitative, he begins an aria structured, like those of Roméo and Faust, in what is essentially an A-B-A manner. The main theme, a fervent and touching andante in 3/4, needs consistently firm legato control especially around E, F, and G at the top of the staff. Gounod’s middle section gives a chance for greater urgency in expression, but also a diminuendo on a sustained G-sharp. After the return of the A section, there’s a brief coda including a stepwise ascent to the high A-flat, and in the pleading phrase that ends the aria – “épargne sa beauté” — you can take your time over the lovely final cadence.