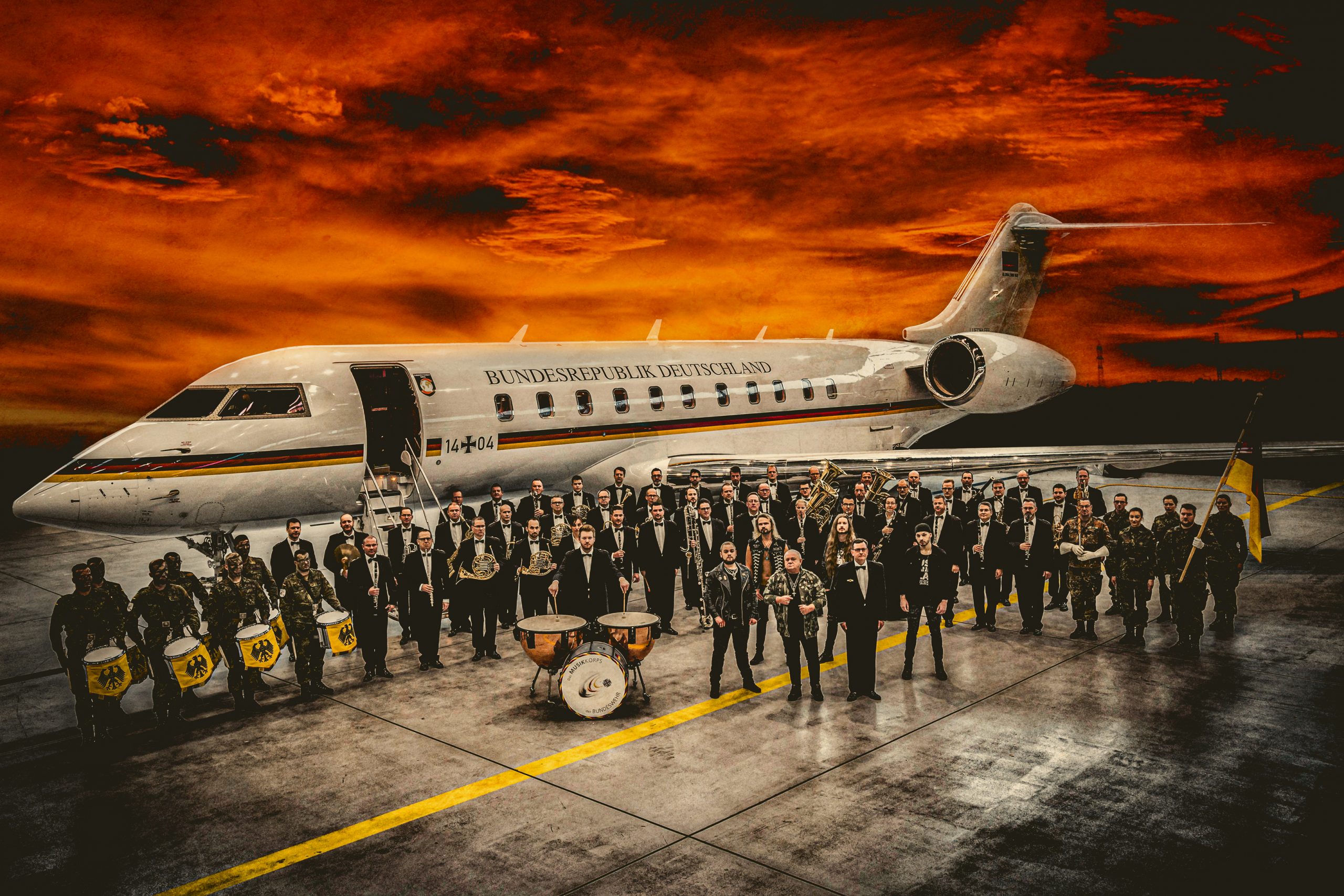 Now as the director of the concert band of the German Armed Forces (also known as Das Musikkorps der Bundeswehr), Scheibling has led Das Musikkorps in other unique performances. In the last five years, he had conducted the orchestra accompanying heavy metal band U.D.O.’s live albums and performances. Though those albums were praised, they were symphonic enhancements to established songs. In 2019, U.D.O. wanted to diversify their sound on their 17th original studio album by adding a new layer of musical complexity. The goal was to complement the message of unity and address challenges such as climate change, worldwide refugee movements, and environmental pollution—and they knew who to call.

Scheibling was the perfect collaborator for We Are One. His ability to seamlessly emote through concert music and provide extra heft through military marches complemented the metal band’s intensity and singer Udo Dirkschneider’s legendary and gravelly voice. Das Musikkorps shares the marquee with U.D.O. on We Are One, which was released by AFM Records in May 2020.

In the following interview, Scheibling discusses his musical journey, why We Are One is an ambitious and powerful career standout, and what he believes are the traits shared by all great singers.

What is your musical background?

I was born in Wipperfürth, Germany, in 1969 and started my musical training at the age of eight with piano and trombone lessons. In 1989, I joined the military music service of the Bundeswehr and, within the framework of my music officer training, I took up studies at Robert Schumann Hochschule in Düsseldorf to obtain my Kapellmeister (music director) diploma. I studied conducting with Professor Wolfgang Trommer and piano with Udo Falkner and graduated with distinction.

From 2010 to 2012, I was deputy director, military music service of the Bundeswehr in Bonn, before being appointed director of the concert band of the German Armed Forces in Siegburg in October 2012. From 2017 to 2019, all German military marches were recorded under my direction. I encourage and promote joint projects of the Bundeswehr Concert Band. Finally, I’m known for activities as a juror in competitions, as a lecturer, and as a guest conductor.

What drove you to combine your military and musical careers?

To combine both military and music into a career was an aim since I was young. Let me express this with three different reasons.

We Are One is a symbolic album title. It is very globally and socio-politically aware and speaks to aspirations of a unified world. It also symbolizes the collaboration between Das Musikkorps and U.D.O. Das Musikkorps’ melodies play like battle hymns and victory marches that complement the power metal element. What was it like to contribute to this album?

On behalf of the entire concert band of the German Armed Forces, I felt proud and honored. It was a great challenge, an extraordinary project and, of course, an experiment. But, overall, it was a common direction from the first step till the end. And it is also a common voice that points out the messages of this album.

We took the best qualities of both the heavy metal band and the symphonic wind band. And this is exactly the color and characteristic element of the album. Yes, there are some titles that sound very glorious and spectacular, but we also found opportunities and space for more silent and relaxed music. It is a fantastic mix of all.

How did you approach the songwriting process with U.D.O.? How did their playing inspire you?

In my opinion, we inspired each other by learning from each other—how a metal band works, how a song is born, and how it develops. [We worked] very closely together with confidence, professionality . . . it was hard and fast working but also a lot of fun. It is something absolutely new: a new musical style; a new way of producing, songwriting, and recording; and a new audience, a new target group.

Does having real musicians provide a special quality that using keyboards and samples cannot reproduce?

Listening to the different instruments, their colors and their sounds, is always something very special. I’m absolutely convinced that this is the most important secret of the sound in this album. Putting 60 musicians of a symphonic wind band, a choir, a bagpipe and, of course, the heavy metal band together is like creating a big mosaic picture with thousands of little pieces and stones. They all have their own meaning, their own place and, therefore, their special authenticity.

Dirkschneider’s voice may not be operatic, but it is certainly distinctive. How, if at all, did you direct the 68-year-old’s singing?

Well, Udo’s singing style is something very special. It is like the business card of his name, and that’s what his fans expect and love.

It was not really necessary to advise a long-professional singer like him. But we found a suitable singer [Hamburg-based singer-songwriter Manuela Markewitz] who fits with him in the duet “Neon Diamond.” With the duet, he fulfilled a personal wish.

What do you believe makes a strong singer or voice?

A great question. In my opinion a good or strong singer has to be born with a special voice. The singer is the voice of the composer, his composition, his emotion, sometimes his destiny. The singer is a messenger, a transporter, a mediator.

There are many singers who move me, such as classical singers like Dietrich Fischer-Dieskau, Diana Damrau, Elena Pankratova, Andreas Schager. Others include Aretha Franklin, Freddie Mercury, Sting, and the King’s Singers.

Though you clearly have an accomplished career, what did you ultimately learn or take away from the experience of working on We Are One?

Thank you, and let me laugh a little bit because I’m sure that my career will never be accomplished. But nevertheless, I learned once more how important it is to build bridges between musicians. I feel good pointing out the problems and challenges of our world with We Are One. And, of course, I learned a lot of interesting technical things. Music is unlimited.

Much of Classical Singer’s audience and readership consists of emerging singers or students. What advice do you have for young artists or musicians looking to build careers?

Trust yourself. Be brave, be curious, be authentic, discover new things, exchange yourself with others, study other cultures, and keep working.

I am worried about the trend of shows and entertainment that promise success and career. Being a star for a moment is not what music stands for. There is much more to discover and to develop, to connect and to share for those who love music.

Justin Smulison is a writer from New York who feels very fortunate to cover and interview musicians whose work have global and personal impact. You can find him on Twitter, and his portfolio is available at JustinSmulison.contently.com.