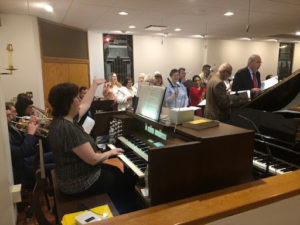 Benefits abound when working in a church, not the least is a powerful human element. People come to church with big burdens and music lifts their minds and hearts. Conversely, people come to church on the biggest days of their lives (such as their wedding) and your music gives voice to their joy. People are touched by what musicians do during a church service.

Next is stability. The pot of gold for job security as a church musician is that in the next few years many current musicians will be retiring.  According to the American Guild of Organists Member Survey, 59% percent of the members who identified themselves as Directors of Music are either at or within five years of retirement age.

Conversely, only 11% of respondents were 20-39 years old, and only 19% of respondents who were between 40 and 59 years old. That means almost half of the people who have retired or who will retire soon will not have a person to replace them. Even now, there are churches who have not had organists or even accompanists for a while. The further a church is from a metropolitan area, the less likely they are to have a regular organist or accompanist. The churches who do have organists have a hard time finding qualified substitutes for when the organist gets sick or goes on vacation. This trend is only going to widen as the years go on. Therefore, skills as either a piano or organ accompanist will pay a large dividend.

One of my favorite things about working in a church is that I get to teach the adults and children in the choirs. I feel good about training them in proper vocal technique and giving them the best of my experience. I get chills when I hear my adults sing well the masterpieces of antiquity. I get to mold my choirs and musicians in more than just in the ways of music. I mold their character and invest in their spiritual well-being. As years have gone on, I have seen so many of them blossom. And there are the unforgettable experiences of singing in that big basilica, or in Rome, and it fills my mind and heart with joy. All these things make working in a church setting a really rewarding job.

Here are four main jobs for musicians in a church:

The job as a music director and as a choir director has regular hours and comes with the perk of getting the first call on weddings and funerals. Other per diem jobs in a church include being a cantor for weekend masses/services, being a cantor for:

Becoming a regular cantor at a church can sometimes take quite some time to break into. However, once you do become a regular cantor, the source of income will be quite steady and pretty high considering the number of hours you have to work.

The person in charge of the Music Ministry is usually the Director of Music. He or she is usually the main accompanist, the choir director, and leader of all facets of the music ministry in general. The Director of Music is usually a part of the leadership team and has supervisory responsibility over all the other musicians. Depending on the size and budget of the church, there may be several other hired staff or per diem musicians in a church- which may include one or more other choir directors, cantors, and/or instrumentalists.

The per diem cantor job for weddings and funerals most of the time is a technically easy job. The repertoire for funerals is usually hymns with the occasional Ave Maria, Pie Jesu, or Panis Angelicus added for good flavor. Churches often have an established repertoire list from which the families of the deceased can choose from. Cantors and organists may or may not receive advanced notice of what you are singing/playing before a funeral, so you have to have everything on the repertoire list learned beforehand. Conversely, you will often have plenty of notification in regards to the repertoire of a wedding.

For weddings and funerals, the cantor arrives 15 minutes prior to the service or mass, sings for about an hour, and then goes home. In the case of funerals, if you live in a major metropolitan area and are the regular cantor associated with a large church, you could sing up to 2-3 funerals a day up to six days a week. In suburbia, the average for a large parish is 3-4 funerals a week with fluctuations up to 6 or 7 a week. In rural churches, there may only be a couple of funerals a month. Therefore, it is economically advantageous to try to get associated with large metropolitan churches.

An increasing trend is to also have professional cantors to lead the music during weekend masses and services. The job description is very similar to what the cantors for weddings and funerals do, with the exception that the repertoire is more likely to be varied when it is on a weekend. The pay might not be quite as good as it is for weddings and funerals, but there’s also usually more opportunities to work. For example, in Catholic churches, it isn’t uncommon to have a Saturday night mass, and 3-5 masses on Sunday morning. So even though the stipend per mass might be lower, you will probably still make a good amount of money for what usually turns out to be one or two half days of work. Singing on a weekend also typically leads congregants to request your services for weddings, funerals, or other musical events.

Jennifer Lavoie received her M.S. in Music Education from Western Connecticut University and her B.M. in Music Education from Moravian College.  She started her career in teaching in public and parochial schools as a Choral Music Teacher for 13 years. In 2017, she became the full time Director of Sacred Music at Saint Elizabeth Ann Seton Roman Catholic Church in Shrub Oak, NY. As Director, she is in charge of playing at 5 weekend Masses, directing six choirs, playing for weddings and funerals, and is in a supervisory role over all professional and amateur musicians at the church.