Singers take many different paths in maintaining an opera performance career, and many factors contribute to success. In addition to the excellent musicianship skills and vocal artistry needed to remain competitive in the industry, more elements also play large roles. A singer needs a strong belief in themselves, drive to keep moving forward, and the ability to maintain physical and mental health to serve them as they continually challenge themselves as artists.

Career paths vary from singers’ experiences in Young Artist Programs to performing roles with regional, national, and international opera companies. There are also differences in the timings of when these opportunities occur within a singer’s life—singers can decide to embrace and appreciate their unique paths and nurture the joy that inspires them to sing.

Being prepared for new opportunities and remaining open to learning during the journey can lead to positive outcomes that were unforeseen. American Tenor Chauncey Packer’s path offers inspiration in career endurance and trusting one’s unique path with confidence.

June 2021 was an exciting month in Packer’s career as an opera singer. He learned that the CD recording created from the Metropolitan Opera’s 2019–2020 season production of Porgy and Bess, in which he performed the roles of Robbins and the Crabman, won a Grammy Award. “I felt overjoyed! The experience was almost unbelievable.”

Performing in the Gershwin masterpiece marked his debut in a production with the Met, a long-time dream of his after he sang on stage as a semifinalist in the 2005 National Council Auditions. “From that brief experience, I had great hopes and dreams to hone opera experiences in the exquisite house, but as time passed, opportunities eluded me. Over the years, I resolved within myself to release those dreams of working in specific houses and to focus on honing the craft to the best of my abilities in the houses where I actually gained opportunities.”

From 2005 onward, Packer did just that and performed with many American and international opera companies. His road to success in sustaining his opera career for so many years was paved by his work ethic and commitment to being a team player. “The key to success in any operatic production is to be prepared, to show up on time (early) for rehearsal ready for the work, to stay focused in the work, and to be cordial and kind with your colleagues and collaborators; one is always a part of an ensemble effort in opera.” However, Packer’s dream to sing at the Met remained smoldering.

“The hope was still within to one day sing on that stage again. I was really grateful to revive my dream and to live it in the Porgy and Bess production.” Packer’s commitment to excellence and belief in his artistry during the events that led up to his performances in Porgy and Bess at the Met serves as a reminder to artists to believe in their talents and to keep moving forward because career-changing opportunities may arise at any time.

A year before the Met production, Packer learned they were interested in auditioning him for the cover of Sportin’ Life. He had performed the role hundreds of times and had been seen on the stages of Teatro alla Scala, Tulsa Opera, Atlanta Opera, Opera Birmingham, San Francisco Opera, and a tour throughout Europe with New York Harlem Theatre. He received critical acclaim for his portrayal of the role: “The part of Sportin’ Life is written for a natural showman. But Chauncey Packer, boasting a clarion tenor and high-kicking strut, found ample opportunities to also suggest the dangers lurking behind the drug dealer’s easy smile” (Washington Post) and “Here Chauncey Packer was the complete entertainer…” (Atlanta Journal).

Performing this great American opera is very special for Packer on a profound level. “The people of Porgy and Bess productions are always family. It is a show saturated with the great theme of community. One cannot be in the show and not be enveloped by that community. I am thankful to have been a part of so many productions. Each new production welcomes a family reunion of old castmates and new colleagues. I am forever enriched to leave P&B productions with a larger supportive family in the arts.” 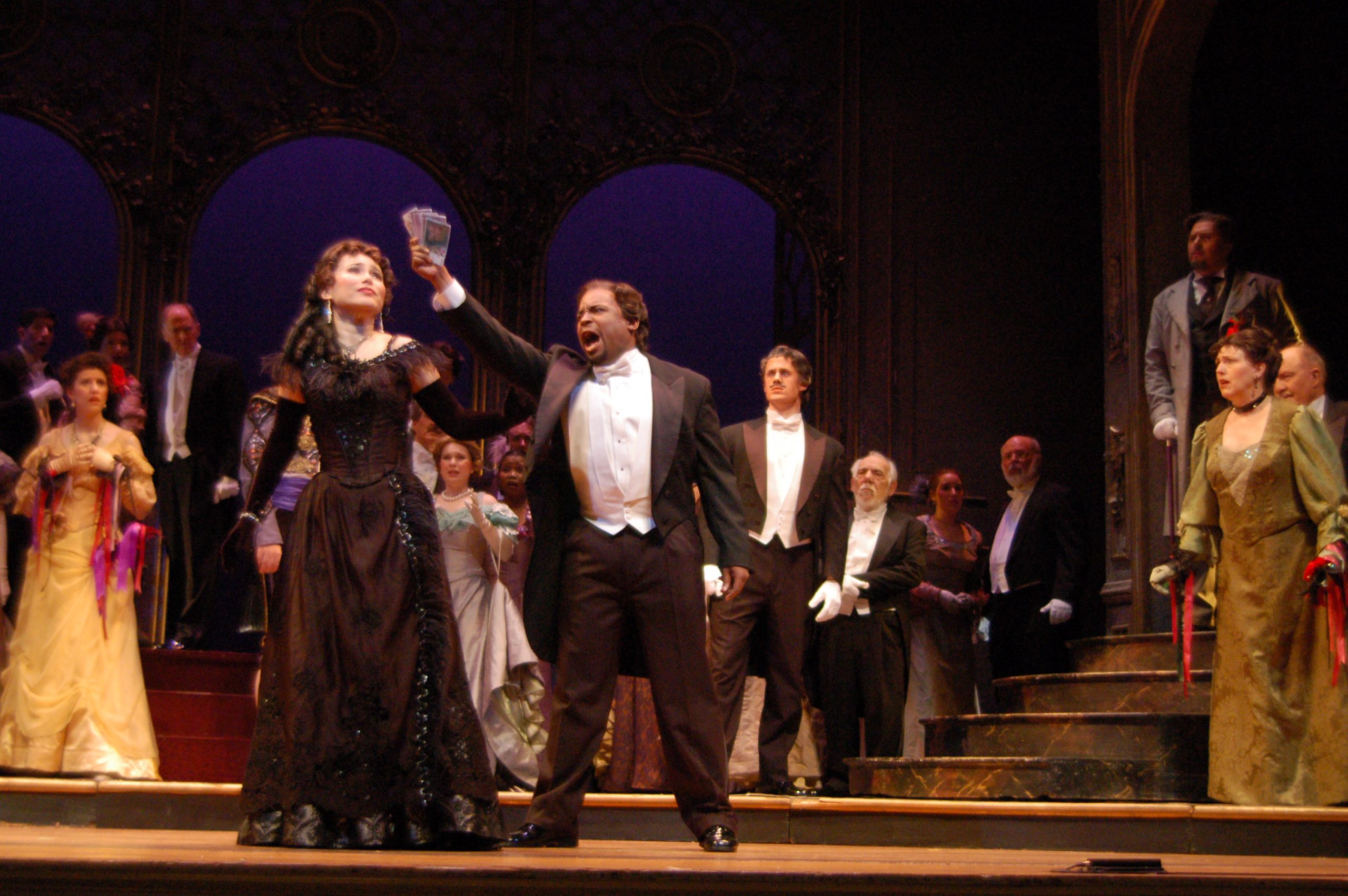 After being initially disappointed that his Met audition was for the cover of a role that he had performed so many times, he decided to see it as a learning opportunity. “One of my main goals as an artist is to remain a constant student of learning. I want to always grow and learn from every experience as an artist. I learn so much from covering, from honing the craft on stage with other artists, to the exchange of energy from live audiences. I learn and grow from every opportunity.” The day before his audition, his resolve was tested still when he learned the Met was considering going in a different direction for the cover.

Even though he was very disappointed to hear this news, Packer maintained his commitment to sing well. So often, singers can get derailed by events right before auditions that compromise their performances. Mental toughness is needed to continue in the direction of excellence through adversity. “I really had to check my ego going into the audition and just sing and show my best.” After the audition, Packer learned that in addition to being cast as the cover of Sportin’ Life, he was also given the Crabman and Robbins roles in the production.

“I was quite elated! This audition experience resurged the lesson of how to enter an audition with confidence in what you are presenting and to show your best skills and talent. The experience could get the best of you if one is unsure of himself and tries to guess what the company is searching to cast. Your assuredness may convince the auditioner of your fit! The audition journey is humbling and yet emboldening.” Packer hopes his audition experience will inspire other singers to maintain a solid conviction to believe in their talents even if the outcome may seem bleak.

Packer recalls his experience performing in the production. “It was a luxurious work experience. It was luxurious casting and singing! The singers, crew, dancers, creative departments, and the entire staff were all at the top of their expertise. Having wonderful resources and talents truly facilitates a smooth working experience. What a joy! And how great it was to experience all the beauty, Black joy, and excellence culminate into great performances that were full-heartedly received by New York audiences. I am ever so proud to be a part of the production.”

Packer also performed the role of Sportin’ Life during the run. “Talk about impossible dreams coming true . . . because of the popularity and demand for the show, the Met, in unprecedented history, added three shows to the schedule mid-season. All previously scheduled shows were sold out. Because our wonderful Sportin’ Life was booked with a previously scheduled engagement, I had the great fortune to perform the role for those three additional shows.”

It had been nearly 30 years since the Metropolitan Opera mounted Porgy and Bess. Many artists in the opera industry and audiences had long awaited the 2019–2020 production, Packer included. “In a time in American history when marginalized people demand to be seen, heard, and represented, mounting this opera full of excellent performers of color telling a story about Black American living was pertinent. I truly believe that it is important for the arts to lead to address underrepresentation in the industry. I believe securing more opportunities for marginalized people is a huge step in the direction of balance. I am also really excited that the piece is being revived in the repertoire of the coming season.”

Sometimes singers achieve their goals later in their careers. During the 2005 National Council auditions, Packer had hoped that was his year to sing at the Met. “The heartbroken 30-year-old me would have wanted nothing more than to have gone into Met opportunities after the MONC competition, but the circumstances and the timing didn’t permit it then. I am so grateful for my life and journey. I have truly learned that if opportunities are divinely yours, to trust that feeling and hold fast to your hopes and dreams.

“Sometimes the opportunity requires some time and other experiences before it orbits around to you again. If I had Met opportunities earlier in my career, perhaps I would not have been as centered as an artist and being. Much of that comes with maturity. Who knows? I definitely felt prepared and ready in the Porgy and Bess production to succeed at the Met. I also felt an overwhelming sense of gratitude for the historic moment and the opportunity to present my art in my country in this house.”

After more than two decades of professional performance experiences to his credit, Packer reflects on his career path. “I am really blessed to have found my love and passion in singing and performing. The journey in the business of singing can be difficult. The business side of any profession can present hardships.”

Packer shares how he stays inspired through challenging times and hopes other singers can find ways to nurture a belief in their talents: “I seek the love of singing and craft, and I also seek out my community of artists, support, and family. They strengthen and encourage me. They are the best validation. The love of singing and the craft of performing feeds me through the hard times. They feed my soul. I make that a priority as I get older, to feed my soul and to always find the love of singing.

“Singers are the only musicians who carry their very delicate instruments inside themselves close, to their hearts. That fact makes for quite the juggling act to balance self-worth and assuredness against subjective and objective critiques. One must develop a tough skin. It is a difficult balance. We seek validation to be hired into opportunities to perfect the craft, but dually we shirk validation of being ‘cookie cutter’ groups to strengthen our unique individual artistry. At the sum of it all, one needs a strong core and center of self-awareness to offer oneself for consideration to be hired.”

Packer continues his busy performance schedule. For his debut in Chautauqua Opera’s 2021 summer season, he performed Justice Scalia in Scalia/Ginsberg and also made his directorial debut for As the Così Crumbles: A Company-Developed Piece. He returns for the Met’s 2021–2022 season in Porgy and Bess and Terence Blanchard’s Fire Shut Up in My Bones, the Met’s first opera production by a Black composer. He also debuts with Lyric Opera of Chicago and Greensboro Opera and returns to New Orleans Opera.

Penelope Shumate is a soprano and voice teacher. Her upcoming and recent engagements include performances with the Royal Philharmonic Orchestra in London, Peoria Symphony Orchestra, Roanoke Symphony Orchestra, and Opera on the James. She has also appeared with Opera Company of Philadelphia, Des Moines Metro Opera, and Utah Festival Opera. She has performed as a soloist numerous times at both Carnegie Hall and David Geffen Hall at Lincoln Center in NYC. She currently serves as Assistant Professor of Voice at Western Illinois University where she teaches Applied Voice and Lyric Diction. www.penelopeshumate.com