Most audition judges are eager to hear any singer whose repertoire choices show some musical curiosity and a sense of adventure. Why choose only the “standard” five arias in your Fach for one audition after another, when there’s so much terrific repertoire out there for you? OK, your “list of five” shouldn’t all be arias found off the beaten track, but one or two would certainly be welcomed by those auditioning you. “Aria Savvy” presents two arias per column, introducing you to music that will invigorate you musically while providing a refreshing change for your listeners.

Handel’s operas offer an abundance of audition possibilities for light- and middle-weight lyric soprano. Partenope is no exception, with the composer assigning no fewer than eight arias to the title role. The gem of the group is “Voglio amare,” oddly neglected in auditions, given that it’s one of the most entrancing pieces Handel ever gave a heroine. A singer possessing the necessary beauty and flexibility of voice, as well as the maximum in personal charm, can create absolute magic in this music.

The complicated plot presents Partenope, queen of Naples, loved by the determined Arsace, the shy Armindo, and the impetuous Prince Emilio. In fact, Emilio goes to war against her because she won’t marry him. She wins and then has him imprisoned! There’s also “Eurimene” – that’s actually Rosmira, Arsace’s jilted fiancée in male disguise, who’s managed to find him in Naples. Arsace tells Rosmira he still loves her, and she insists that he prove his love by keeping her identity a secret. To make matters more confusing, “Eurimene” then also declares that “he” loves Partenope! Armindo is able to make his feelings known to Partenope, and in his presence and “Eurimene’s,” she declares in her aria that she’ll adore her beloved (whom she doesn’t name specifically) until death.

Describing “Voglio amare,” the dean of Handel scholar, Winton Dean, praised “its noble melody, expanding and contracting in varied phrase-lengths against a flowing counterpoint.” The aria is delightfully buoyant musically. Handel’s phrase structure elegantly mixes graceful legato with flights of coloratura divisions, as well as numerous trills, but everything sits within a perfectly reasonable range. It’s vital that the singer maintain rhythmic precision, while also offering a glowing warmth in the voice, along with appealing graciousness and femininity. Through the entire aria there must be a special confidence in Partenope’s manner of expressing herself, in keeping with the regality of her character and the fact that she’s used to getting what she wants. If all these elements are in hand, the aria can offer immeasurable joy to both the soprano and her listeners. 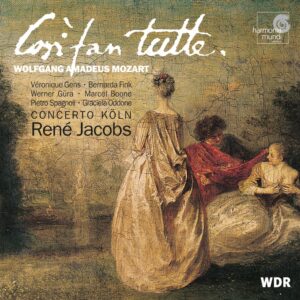 The only character in Così to whom Mozart and Da Ponte assigned three arias is Ferrando: “Un aura amorosa” – by far the best known of the three – in Act One, then both “Ah, lo veggio” and “Tradito, schernito” in Act Two. It’s “Ah, lo veggio” that is heard least often onstage. There are reasons for that: it is, first of all, by far the most challenging of the arias technically, and “Tradito, schernito” comes barely fifteen minutes later. Conductors may consider that too much of a good thing – and perhaps they’re concerned for the stamina of their tenor, who also has the formidably difficult duet with Fiordiligi to sing in the next scene. The fact remains, however, that “Ah, lo veggio,” when well performed, is stupendously impressive, particularly as regards musicality and control of the upper register.

Two officers, Guglielmo and Ferrando, have made a bet with Don Alfonso, who believes that their fiancées – two sisters, Fiordiligi and Dorabella – can’t remain faithful for 24 hours. The men pretend to leave for battle, then return in disguise, and each attempts to woo each other’s beloved. Midway in Act Two, Guglielmo has succeeded with Dorabella, whereas Ferrando’s ardent please have – at least for the moment – been unable to break down Fiordiligi’s resistance. In his aria, Ferrando insists that her sweet soul couldn’t possibly resist his tears. Wondering how she can let him languish in misery, he finally declares, “May my false hopes now end – she’s cruelly condemning me to die.”

Of the tenor arias in the mature operas of Mozart (that is, Idomeneo and the works that followed), “Ah, lo veggio” probably sits the highest. Anyone singing this aria must be able to live in his upper octave, reaching high B-flat effortlessly and often (there are thirteen high B-flats in the aria – none of them sustained, just lightly touched within passages of eighth-notes). The line itself has to flow forth in a breezy allegretto, with the occasional fermata where the tenor can briefly pause before plunging ahead. Intonation must be spot-on, particularly as regards the vocal line’s constant leaps. And finally, there’s the challenge of maintaining the essential sweetness of tone throughout! So, as lyric-tenor repertoire goes, this aria demands something of a mastersinger – but if you can manage it with technical security as well as terrific musicality, you’ll leave your listeners awestruck.

Score published by: Schirmer or Bärenreiter

Roger Pines, former dramaturg of Lyric Opera of Chicago, has adjudicated for major vocal competitions for the past three decades. Currently a freelance writer, lecturer, coach, and broadcaster, he has taught the opera repertoire course at Northwestern University’s Bienen School of Music since 2019.