Most audition judges are eager to hear any singer whose repertoire choices show some musical curiosity and a sense of adventure. Why choose only the “standard” five arias in your Fach for one audition after another? There’s so much repertoire out there waiting for you! OK, your “list of five” shouldn’t all be arias found off the beaten track, but one or two would certainly be welcomed by those auditioning you. “Aria Savvy” will present two arias per column, introducing you to music that will invigorate you musically while providing a refreshing change for your listeners. 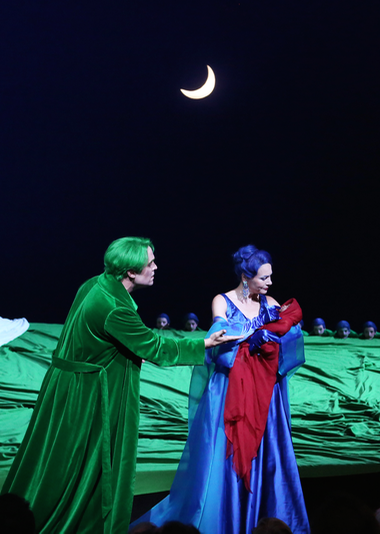 Photo by Pascal Victor courtesy of the Aix Festival

If you want to reach out to an audience and tug at heartstrings, look no further. This aria is classic early-Romantic German legato, and its plaintive phrases can be exceedingly touching in the right voice.

It also has the special plus for singers, in that there are two language possibilities when performing it: Oberon was premiered in English in 1826, but was immediately translated for performances that same year in German. In past decades, on the infrequent occasions when it’s performed, the opera has been sung in German for some productions, in English for others, depending on the particular theater and audience.  In auditions, certainly either language is acceptable.

The libretto of Oberon – not always especially coherent (hence opera companies’ reluctance to stage the opera!) – centers on the knight Huon and his beloved Reiza (spelled Rezia in the German-language version). The two of them are put through all manner of danger and misery, just so that an argument can be decided between Oberon, King of the Fairies, and his Queen, Titania: is it a man or a woman who is more likely to be unfaithful? In Act Two, Reiza is captured by pirates. They deliver her to the Emir of Tunis, and when encountered in Act Three, she’s desperately unhappy as a member of his harem. In her aria, she laments the end of her hopes, feeling nothing but sadness. “Ye that are sailing on hope’s golden stream,” she sings, “a cloud may come over ye, a wave sweep the deck, and picture a future of darkness and wreck!”

Marked “Andantino,” the aria sits in a very manageable range – just middle C to F at the top of the staff. Weber gives it a straightforward, unfussy, unfailingly dignified vocal line. That should leave you free to produce your legato in a steady, easy, unimpeded flow of tone. It should also open the door to direct, honest, eloquent coloring of the text. Your middle voice needs a good deal of fullness and warmth to do the aria full justice.

Listen to:  Hillevi Martinpelto (in English 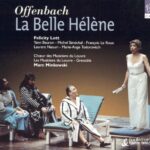 If you have spectacular high B-flats, rejoice in this aria, which offers six of them (seven if you jump up the octave at the very end).  While impressing with your command of the upper register, you can dazzle with youthful energy and your instinct for communicative storytelling.

La belle Hélène, a masterpiece of opéra bouffe, is certainly one of the most delectable treatments of Greek mythology to have made it to the stage. Its protagonist is Helen of Troy, married to dull King Menelaus of Sparta. Helen has heard that Venus promised the Trojan prince Paris the most beautiful woman in the world. Of course, Helen believes that she is that woman! Having just arrived in Sparta, Paris explains how he was awarded this special prize from Venus. In “Au mont Ida,” he describes how three goddesses were assembled on Mount Ida: Venus, Minerva, and Juno. Paris held an apple in his hand, which he awarded to Venus, whom he deemed the loveliest of the three.

The aria is written throughout in 6/8, which gives it a wonderful forward motion from start to finish. At the same time that you bring the necessary rhythmic precision to the vocal line, you also need to maintain a constant buoyancy and lightness of touch, as well as a sunniness of timbre and the maximum in sheer charm. The B-flat you can throw in at the end is on the word “façons,” but the six others are sung in octave leaps on the last syllable of the word “evohé,” so you’d better be totally comfortable on the vowel sound “é.” By the way: in case you’re wondering, “evohé” is defined by Collins Dictionary as “an exclamation of Bacchic frenzy”!