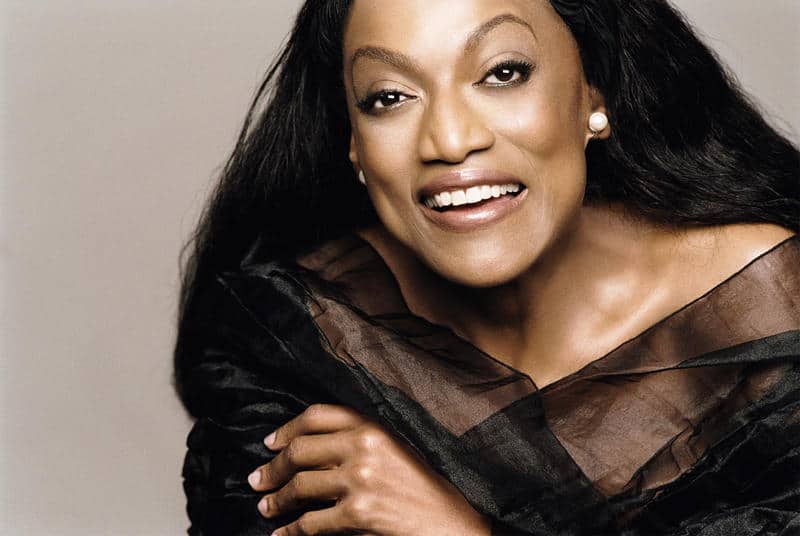 The magnificent American soprano Jessye Norman died September 30, 2019, in New York City. Norman was one of the most accomplished and admired singers of her day, and it is my honor to share some of her incredible life story by writing about her hometown memorial service. Norman grew up as one of five children in Augusta, Georgia. She spent most of her career in France, Germany, and New York—all the while advocating for civil rights and never forgetting her roots.

Norman founded the Jessye Norman School of the Arts, located in downtown Augusta on what has been officially named Jessye Norman Boulevard. The school has grown into a landmark center offering free music, dance, art, and creative writing courses for Augusta’s underserved youth. Norman was planning to come home for the annual school fundraiser in October. After recently relocating to the area to direct opera at Augusta University, I found it heartbreaking to sit in the congregation of her memorial service the very same weekend I had hoped to meet her in person. Rather, I joined my community in paying our respects as she came home for her final encore.

The service was an extraordinary showing of musical offerings and sublimely worded tributes. Norman shared her God-given voice with the world and served as a dedicated philanthropist in many avenues of culture, making this world a better place. Most near and dear to our Augusta hearts, Norman’s generosity has gifted thousands of local children with arts education through her school.

Entering the Bell Auditorium in downtown Augusta, the congregation was carried up in true Southern Baptist style. Choirs sang and the organ never stopped as the crowd gathered and the family entered together.

Norman lived a life both humble and majestic, using her talents to increase international presence for African American music. Metropolitan Opera General Manager Peter Gelb referred to her as “one of the greatest artists to ever sing on our stage.” Her legacy includes such incredible honors as singing for the second inaugurations of Ronald Reagan and Bill Clinton and winning five Grammy awards including the Lifetime Achievement Award.

She received the Kennedy Center Honor in 1997 and the National Medal of Arts in 2009. In 1989, Norman was invited to sing “La Marseillaise” in Paris for the 200th anniversary of the French Revolution. In 1990, she was named honorary ambassador to the United Nations. She had also been awarded honorary doctorates from many distinguished universities.

The lineup of artistic royalty from Norman’s inner circle that paid tribute at her memorial included the incomparable Audra McDonald, who sang “God’s Gonna Build Up Zion’s Walls,” and Harolyn Blackwell divinely delivered one of her signature Bernstein classics, “Somewhere” from West Side Story. Lawrence Brownlee shared the song he has dedicated to his son, “All Night All Day,” with lyrics assuring Norman’s family that “angels [are] watching over me.” Mark Markham, Norman’s longtime collaborative pianist, played his own arrangement of “Deep River,” Wycliffe Gordon played “Down by the Riverside” on trombone, and the precious young voice students of the Jessye Norman School of the Arts sang “Bridge over Troubled Water.” These distinctly American musical offerings filled the hall with a sonorous nod to the majestic voice, legacy, heart, and spirit of Norman.

Like many friends and colleagues who felt loved and supported by Norman in their artistic pursuits, Augusta natives Laurence Fishburne and Wycliffe Gordon both recounted Norman attending their performances in her voluminous silk robes and coming backstage to personally applaud them. Fishburne stated, “She was powerful and energetic, whimsical, and beautiful all at the same time. She made me feel something greater than myself.”

Gordon shared, “I have spent the past seven or eight years performing in New York City during Thanksgiving, sacrificing time away from my family to do what I love most, sometimes creating a serious longing to just be ‘home.’ I was very fortunate that Jessye Norman and her family and friends would come to my shows on Thanksgiving night and bring ‘home’ to me. What a blessing, pleasure, privilege, and honor to have the great Jessye Norman bring the spirit of my hometown to me so I wouldn’t be completely alone in the city during the holidays. Thank you, Ms. Norman. I will never forget it!”

Amidst a life of musical celebrity, she was known for hosting intimate dinners where she served her famous home-cooked turkey soup, she didn’t mind ironing a shirt for her brother before her own concert, and a family member recounted that Norman spoke of her connection to her past as what kept her grounded. “I tell myself that I’m not just me,” Norman wrote, “that I’m the result of things that happened long before I was born.”

The stories shared by her friends were filled with memories of Norman’s love, her generosity, and her passion for creating music that was as perfect as possible. An admiring clergy from the Cathedral of St. John the Divine declared Norman as possessing black girl magic before #BlackGirlMagic was even a thing. He recalled asking her to run away with him and he blushed at recounting that she had compassionately patted his hand and replied, “Maybe someday.” Composer and friend Bruce Saylor longingly praised Norman’s interpretation of Duke Ellington’s song “Is God a Three-Letter Word for Love?” and concluded his remarks with, “Jessye is a six-letter word for love.”

A noteworthy New York Times review by Edward Rothstein was quoted likening her voice to a “grand mansion of sound. . . . It defines an extraordinary space. It has enormous dimensions, reaching backward and upward. It opens onto unexpected vistas. It contains sunlit rooms, narrow passageways, cavernous halls. Norman is the regal mistress of this domain, with a physical presence suited to her vocal expanse.”

Others commented on her uniquely wide range, and it was recounted that when asked if she considered her voice to be a contralto or soprano she answered, “Only pigeons are comfortable in pigeonholes.” Her photographer Carol Friedman spoke of losing Norman and stated simply, “Grief is the price of love.”

Narratives about how much she will be missed and how she was loved included a time in high school when her music teacher recognized Norman’s potential. She wanted to take young Norman to her first competition in Philadelphia, but the family didn’t have the money to send her. The school decided to ask the students of Lucy C. Laney High School to give up their lunch money for a week to help Norman get a bus ticket to Philadelphia.

Norman’s rise to international fame as a woman of color amidst the American civil rights movement gave her power to herald history by honoring her roots in African American spirituals and gospel music.

Norman worked with the board of advisors for Carnegie Hall in 2009 to create a month-long series of concerts and panel discussions admirably titled “Honor! A Celebration of the African American Cultural Legacy, Curated by Jessye Norman.” Clive Gillinson, the executive and artistic director of Carnegie Hall, shared an anecdote about his idea for this concert series and his innate sense that Norman was the woman who could make it happen because “she really did belong to the whole world, and every aspect of what she did mattered as an artist and as a human being.” He described eating lunch with her and finding himself too nervous to ask for her help until the end of the meal. Gillinson recalled that Norman broke into a huge smile and exclaimed, “This is the project I have been waiting for my entire life.”

In closing, I want to personally thank Norman for her recordings that propelled my love for German Lieder as an undergraduate music major and for the unforgettable evenings listening to her sing onstage at the Metropolitan Opera when I was a young artist living in New York City. Her legacy will live on in generations of singers and artists that follow her life of amazing grace.