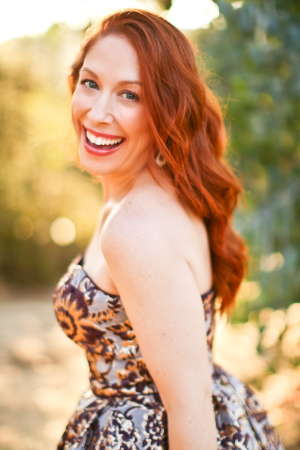 Ms. Bond’s Hannah After in Laura Kaminsky’s As One was called “extraordinary” with “intense singing and acting”. She has recently been seen as Tisbe in Cenerentola and Maddalena Rigoletto at Opera Las Vegas, Mrs. Ott in Festival Opera’s Susannah and Third Lady in Salt Marsh Opera’s Magic Flute.

She has been hailed by the LA Times with a “Brava!”for her performance as Swiss Grandmother/Austrian Woman/British Dancing Girl in Long Beach Opera’s production of John Adams’ Death of Klinghoffer. As Marilyn Monroe in the US premiere of Marilyn Forever, Opera News says “Bond played the more private Monroe in a recognizable way, sensuous, nervous, making love to the camera. She sang sumptuously, expressively.” She has charmed audiences in roles such as Carmen, for which Singerpreneur praised her “luscious voice that filled the theater, her intense middle voice ringing with the freedom of her technique.” A special honor for Ms. Bond was when she premiered the role of Lady of the Charts in Kenneth Wells’ opera The Center Cannot Hold, dramatizing the intensely profound memoir of Dr. Elyn Saks’s journey with schizophrenia. Another major highlight of working with new music was when Ms. Bond sang the operatic solo on Beyonce’s 2017 Grammy Award show performance.

Other roles include Dido in Dido & Aeneas, Hermia in Britten’s A Midsummer Night’s Dream, Siebel in Faust, Olga in Eugene Onegin, Cornelia in Handel’s Giulio Cesare, Paquette in Candide, Amahl’s Mother, Flora in La traviata, Reporter in the world premiere of Stephen Schwartz’s Séance on a Wet Afternoon for Opera Santa Barbara and Witness in LA Opera’s much loved & Grammy nominated Ghosts of Versailles. Ms. Bond debuted in Germany as Maddalena in Rigoletto with Opera Classica Europa.

Solo concert work includes Verdi’s Requiem, JS Bach’s Mass in B Minor, the Magnificats of JS & CPE Bach, Handel’s Messiah and Dvorak’s Stabat Mater. Ms. Bond also uses her vocal & musical skills for film, TV and video game scores, singing on the 2017 Grammy Award show, as a voice over artist, as well as being a film/commercial actress, performing with the improv troupe Not FRIENDS.