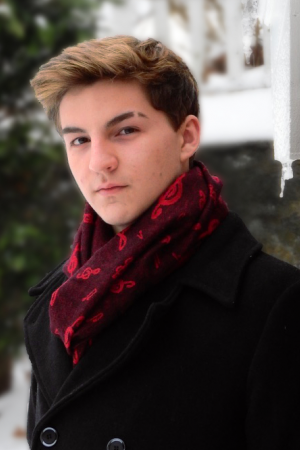 Countertenor Sam Higgins has received recognition for his “innate musicality” and his “complex understanding of music.”. He has been singing with orchestras since the age of 11. In April of 2018, he was named a Grand Prize Winner in the Fidelity Young Artists Competition at the Boston Symphony Pops. His Grand Prize award included a solo performance of Bereite dich, Zion from the Christmas Oratorio of J.S. Bach with Keith Lockhart and the Boston Symphony Orchestra Pops in Symphony Hall on June 6th, 2018. On February 29th, 2020, Sam performed Handel’s aria Dove sei, amato bene from ‘Rodelinda’ on NPR’s “From the Top.” In February of 2019, he participated in the Metropolitan Opera Guild’s High School Singers Intensive as one of only ten singers selected nationwide. On May 25th of that year, he was a Finalist and won the “Most Promising Sophomore” Award at the Schmidt Vocal Competition in Boston, MA. Sam was selected and attended the Boston University Tanglewood Institute Young Artists Vocal program in the summer of 2019. Later that summer, he was selected as a Finalist in the Classical Singer Online Competition, High School Classical Division. In May of 2020, Sam won First Prize in the Classical High School division of the Classical Singer Competition. In August of 2021, he entered the Curtis Institute of Music studying with esteemed voice teacher Julia Faulkner.

Sam was a member of the Boston Symphony Orchestras’ Children’s Chorus for the 2017 – 2018 season performances of Mahler’s 3rd Symphony and La Boheme. Sam started singing with Boston City Singers at the age of four and was a member for eleven years. As a member of the Handel and Haydn Youth Choruses, he has enjoyed the opportunity to sing on the Symphony Hall stage again in Bach’s St. Matthew Passion.

Between the ages of 12 and 14, Sam performed the boy soprano solo in Bernstein’s Chichester Psalms nine times with seven different organizations. In December of 2015 at the age of 13, Sam was the boy soprano soloist with the New England Philharmonic under the direction of Richard Pittman in a performance of Robert Kapilow’s Elijah’s Angel with baritones David Kravitz and Dana Whiteside. Sam performed the boy soprano solo in the world premiere of Howard Franzin’s The Voice of Isaac in March of 2016 with Baritone David Kravitz and Coro Allegro under the direction of David Hodgkins. Also in 2016, Sam performed Peter Child’s Peace Poem after a Ugartic Inscription for the dedication of the Trygve Lie Plaza at the United Nations compound in N.Y.C. for the Prime Minister of Norway and other dignitaries. In April of 2017, Sam performed the boy soprano solos in Bernstein’s Mass with the Boston Conservatory at Berklee under the direction of world-renowned conductor and musical director Eric Stern. On January 18 – 20th, 2018 Sam performed as a member of the children’s chorus in performances of Mahler’s 3rd Symphony with the Boston Symphony Orchestra, Soprano Susan Graham and the women of the Tanglewood Festival Chorus under the direction of Maestro Andris Nelsons. On December 1, 2018, he was the Featured Soloist with the Polymnia Choral Society singing Sometimes I Feel Like a Motherless Child, as the winner of the “Spotlight on High School Talent” award.

Also an accomplished violinist, Sam has performed with members of the New Hampshire Music Festival Orchestra for the annual children’s recital, and with the Massachusetts All-State, and Eastern District Orchestras. He started violin at age 4 with Jan Riggs of Newton, MA. His other teachers have included Charles Dimmock, Concertmaster of the Rhode Island Philharmonic and Portland Symphony Orchestras, and Anna Korsunsky of the Rhode Island Philharmonic Orchestra.

Sam has studied voice with James Burton, the Director of the Tanglewood Festival Chorus, Kerry Deal of the Boston Conservatory at Berklee, Ellie Shattles of the University of Texas at Austin, Eiji Miura of MIT, and Corey Hart of New England Conservatory Preparatory Division.