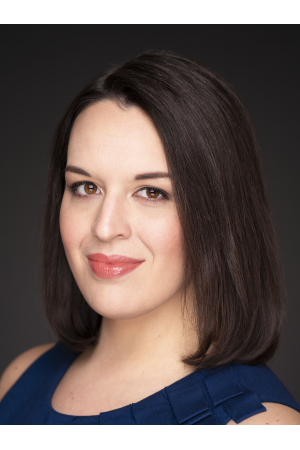 Known for her floating high notes and rich middle range, soprano Hillary Esqueda is a versatile lyric soprano emerging in the opera scene. Described as a “powerful” and “solid” performer, Ms. Esqueda strives to bring truth and relatability to her performances by exploring the worlds of movement, musical theater and more.

Hillary has performed primarily in the Chicagoland and NY/NJ areas. Roles performed include: Drusilla (L'incoronazione di Poppea), Popelka (Comedy on the Bridge), Marie (La Fille du Régiment), Sophie (Werther), Marzelline (Fidelio), First Lady (Magic Flute), Musetta (La Bohème) and Frasquita (Carmen). She has also had the fortune to perform as a young artist and apprentice with Hubbard Hall Opera Theater, Opera Oggi, and Underworld Productions. In summer 2016 she traveled to Los Angeles for OperaWorks’ Advanced Artist Program where she explored her artistry in a four-week intensive training program culminating in two performances of an improv opera, Trump'd: Making Opera Great Again. In addition, she has had the honor of performing as a chorus member with the Chicago Sinfonietta in their MLK tribute concert, with the Chicago Symphony Orchestra for Defiant Requiem: Verdi at Terezín, and with the Roosevelt Alumni Chorus performing Daphne et Chloe.

Her passion for modern and contemporary opera led her to create two roles for composer Francis Lynch in the world premieres of For Those in Peril (Gwendolyn) and Joseph’s Gift (Mary). Aaron Hunt of Chicago Theatre Review described her performance of Mary as "appropriately serene...with a flowing and pitch-perfect voice that sets the bar high for any soprano undertaking this role in the future." Hillary also appeared in the Midwest premiere of With Blood, With Ink as legendary poet, scholar and nun Sor Juana Ines de la Cruz in Third Eye Theater Ensemble’s intimate store-front production. Hillary joined the company again in 2019 for their production of Darkling (Soprano Anna) by Stefan Weisman and Anna Rabinowitz.

This past year, Hillary competed as a Semi-Finalist in the Orpheus Competition in Murfreesboro, Tennessee, and was recently named a semi-finalist for the American Prize (Women in Opera Division). ​Ms. Esqueda closed the year with her role debut of Mimi in a concert reduction of La Bohème with Evanston Chamber Opera.

Hillary received her Bachelor’s degree in Music from NYU’s Steinhardt School and her Master’s from Chicago College of Performing Arts at Roosevelt University. Hillary currently lives in Chicago and studies with Countertenor Mark Crayton.