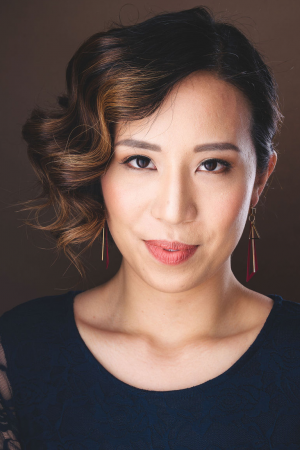 Praised for her “lovely bright clear voice” in the 2019 Llangollen International Musical Eisteddfod, Hong Kong mezzo-soprano Jeannette Lee is a versatile performer who recently received a special commendation for her performance in the semi-finals of the Pendine Voice of the Future.

Her operatic roles include Cherubino (Le nozze di Figaro), Orlofsky (Die Fledermaus), Fox (The Cunning Little Vixen), Hänsel (Hänsel und Gretel), Hermia (A Midsummer Night’s Dream), Third Spirit (Die Zauberflöte), and Nursing Sister (Suor Angelica). She recently performed at Her upcoming engagements include Cherubino with VOX New England and Antonia in Wagner’s Das Liebesverbot with the Cambridge Chamber Ensemble and a summer residency with Teatro Nuovo in 2021. She will also be playing the role of Cornelia in Musica Viva’s production of Giulio Cesare

As a concert soloist, Jeannette was the only invited solo artist who performed with the internet sensation TwoSet Violin with Hong Kong Festival Orchestra in their 2017 debut concert. Other performances include Mozart’s Vesperae solennes de confessore with South Coast Community Chorale, Händel’s Messiah with Masterworks Chorale (Boston, USA), Monteverdi’s Marienvesper with Lautten Compagney (Berlin), Bach’s BWV70 with Hong Kong SingFest, and Schoenberg’s Pierrot Lunaire with the CUHK New Music Ensemble (Hong Kong). She recently did the Asian premiere of Colin Jacobsen’s For Sixty Cents in collaboration with Cong Quartet in Hong Kong this December and presented a joint-recital entitled “Dialogue” as an exploration of the woman’s voice historically and figuratively with soprano Mengtao Zhou. She will also be singing the second solo in Mendelssohn’s I Waited for the Lord at the Church of the Redeemer in collaboration with soprano Janet Ross as well as alto solo in Beethoven’s Symphony No. 9 under conductor Vivan Suen at the Hong Kong City Hall this upcoming August.

Jeannette received a Bachelor of Arts double majoring in English and Music (First Class Honors) at The Chinese University of Hong Kong. This year, she obtained her Masters in Music with Academic Honors at the New England Conservatory with the support of the prestigious Hong Kong Jockey Club Music and Dance Fund.