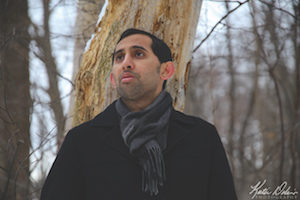 Up-and-coming baritone Siddharth Dubey was recently featured as a soloist with a professional choral group. This month he shares his performance experience, in addition to telling readers about his love of singing for others.

Where did you last sing and get paid?

I was one of the featured soloists in a concert entitled “Serenade to Music” with Auriel Camerata, a professional group that focuses on bringing choral music to the Albany, New York, region. I performed the Five Mystical Songs of Ralph Vaughan Williams, accompanied by piano and organ. This was the first concert of their 2017–18 season, and “Serenade to Music” featured the music of Vaughan Williams.

How much were you paid?

I was paid $315 as a professional soloist and as a full-time member of the Auriel Camerata. Considering the Albany area, that is a solid amount.

Where and when was the gig?

This gig was at a church called the Church of the Immaculate Conception in Glenville, New York, which is in the vicinity of Schenectady. It took place on Saturday, November 11, 2017, at 7:30 p.m. Prior to the performance, we had six rehearsals.

How did you get the job?

In September 2016, I gave a recital at SUNY Albany at the Performing Arts Center. I also have a church job as a soloist and section leader, and my church director posted a recording of my recital on YouTube. He then contacted the director of Auriel Camerata, putting in a good word for me about possibly performing with them in the future. The director of Auriel Camerata then contacted me, asking me to become a member of this wonderful group.

I was thrilled to become a member and participated in several of their concerts during the 2016–17 season. For the most recent season, I was asked to be the featured soloist for the Vaughan Williams. The chemistry and relationship I have developed with the director, Derek Stannard, was instrumental in me getting the opportunity to do this.

It was a wonderful experience! I loved how the music came together, the easy collaboration among the singers, and the commitment to produce an extraordinary level of artistry. The music was rather challenging but extremely fulfilling. We started with Five Mystical Songs, followed by the Mass in G Minor, and ended with Serenade to Music.

How did the audience respond?

The church was almost packed, and the audience absolutely loved the music. If I recall, it was an extremely frigid night with temperatures in the teens, and that could have impacted the audience immensely. That wasn’t the case, however, as we had a full audience.

The performance went really well, and what made it great was that my objective as a performer is to share the gift of music with others. It was a positive experience of making wonderful music, in addition to helping build my career.

Would you do this or a similar gig again?

Absolutely! These kinds of gigs are essential for a regular performer because of the exposure. I have been trying to establish myself locally, in addition to auditioning for Young Artist Programs.

It has been going very well so far, and Albany, New York, has a thriving arts community. Every musician is looking for that “break,” but it is very important to constantly perform in order to keep that rhythm going and to establish yourself. This also allows you to learn new repertoire and network even further.

Singing is not about the venue, the fame, or the recognition. In fact, it’s not even about the paycheck. Singing is about sharing the gift of music, inspiring others to pursue their dreams, and touching the lives of people.

Though my goal is to sing on an international level, every performance I give is a wonderful opportunity to touch the lives of others. I derive more satisfaction when audience members come up to me and say, “You’ve made a difference” or “You’re inspiring.” That really means a lot to me. Singing doesn’t just come from your vocal folds, it comes from your soul.

We want to hear from you. What are you doing to expand your palette of musical genres? Where did you last sing and get paid? If you have recently performed and were paid for that performance, whether it was a traditional or nontraditional gig, we’d love to share your story with the Classical Singer community. Please e-mail Michelle Latour at thelatourvoicestudios.com regarding your experience. And tweet about it at @classicalsinger and @latourstudios. Also #mylastpaidgig, #neversingforfree, and #createopportunities.

Dr. Michelle Latour is active as a teacher, singer, writer, and adjudicator and lives in Las Vegas. She has been on the full-time faculties at several universities. She is currently a voice faculty member for the Italian-based summer program, The International Opera Performing Experience and owns a private studio, the LATOUR Voice Studios. You can visit her at www.thelatourvoicestudios.com, Facebook, Twitter, and Instagram.